According to media reports, a netizen posted on October 8 that the “privacy” function of the new version of iOS 15 has “record App activity”, which can store data such as App access location or microphone within 7 days, and WeChat when the user does not actively activate the application. Read the album several times in the background, and the time for each reading is from 40 seconds to 1 minute. 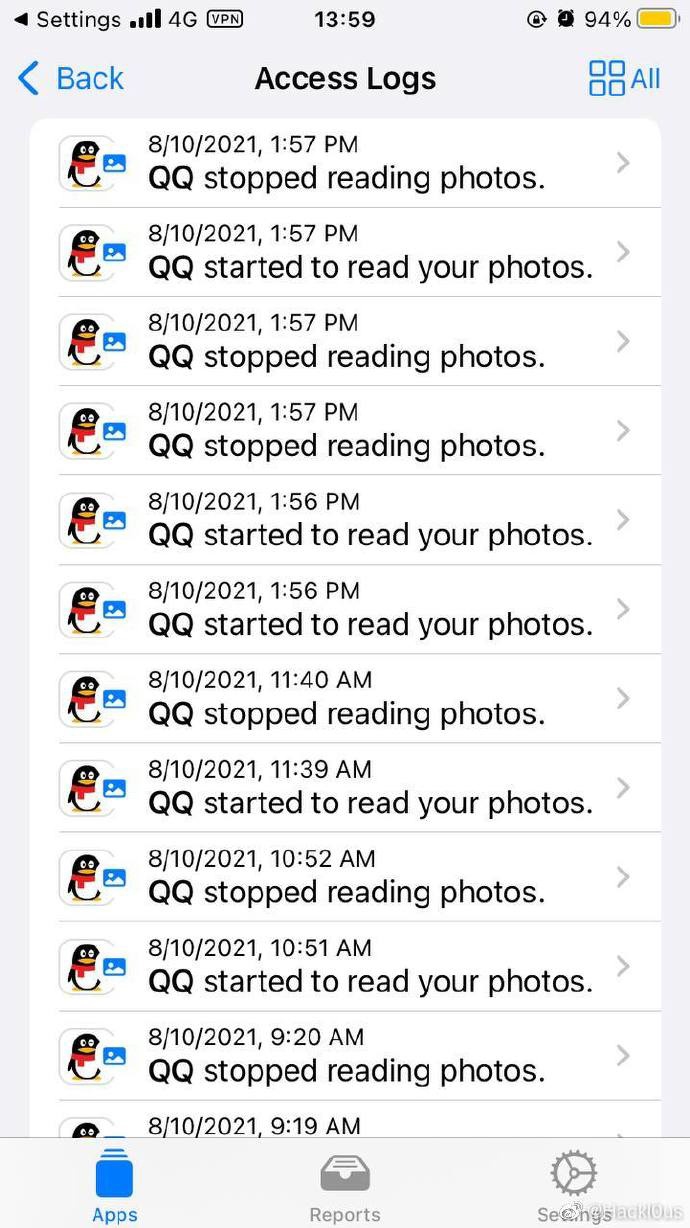 In the evening of the same day, WeChat responded that after the user authorizes WeChat to read the “system album permissions”, in order to facilitate users to quickly post pictures when they press “+” in WeChat chat, WeChat uses the iOS system provided for App developers. The ability to notify the standard of photo album updates makes the user experience of sending pictures faster and smoother.

The above actions are only performed locally on the mobile phone. The latest version will cancel the use of the system’s capabilities and optimize the function of quick image posting. WeChat’s statement, in other words, is to make pre-reading for users to use it more conveniently, but this explanation did not calm public opinion. Many users worry about whether WeChat repeatedly reads albums in the background, whether some unnecessary information is involved, and whether their privacy and right to know will be violated.

In March this year, the four departments jointly issued the “Regulations on the Scope of Necessary Personal Information for Common Types of Mobile Internet Applications”, clarifying that mobile Internet application operators shall not refuse users to use basic functional services because users do not agree to collect non-essential personal information. There are similar provisions in the Cybersecurity Law.

The gradual improvement of the rules does not mean that the users’ worries are superfluous. For a long time, all kinds of apps over-collecting users’ personal information have frequently appeared in the media, or regardless of the nature of the service and actual needs, as much as possible to ask for the address book, camera and other permissions, or to “incentivize users” and “redeem” In the name of “welfare”, secretly “sweeping” the upload bandwidth of non-VIP users and occupying a large amount of local space. To a large extent, people become scared by the stigma, and they are extremely concerned about and distrustful of such issues. This sensitivity is a silent urge for relevant companies to implement policies as soon as possible.

Specific to this matter, there are some notable and clear details. WeChat mentioned that the iOS system provides App developers with standard album update notification capabilities. When the album content is updated, the App will be notified to remind the App that it can prepare in advance, and the preparation behavior of the App will be recorded as reading the system album. Moreover, this move is based on the premise that the user authorizes WeChat to read the “system album permissions”.

Therefore, if the user refuses to use WeChat to access the album and cannot use the basic services, then WeChat is clearly in violation. According to the usage habits of most people, the permission of the album will be opened. Based on the principle of “the smallest scope for the processing purpose”, whether the pre-reading behavior of WeChat has exceeded the processing purpose requires further clarification and cannot be interpreted at will , Free play. Among them, it involves a basic service and the definition of the scope of reading, which needs to be combined with product functions to make a comprehensive judgment.

In any case, WeChat did not fulfill its obligation to inform before the user discovered the problem. The cancellation in subsequent versions is a remedy based on technology and product logic. When it is cancelled and whether there is a comprehensive investigation, it needs to be positively explained to solve the user’s worries. It is not a contradiction between user privacy, right to know and “convenience” to read albums repeatedly in the background of the App.

[评论]App secretly reads the user’s photo album, old problems can no longer be used to

The third series of Honda HR-V is only...

The real car has not yet been delivered...

Women and technology, so a radar discovers the...

Toyota Mirai will undertake transportation services for the...

Piaggio and Feng Chen Wang together for a...