1. The architecture and technology of the 13th generation Core release

Over there, AMD launched the Zen4 architecture Ryzen 7000 series processors;

Here, the Intel 13th-generation Core series is also roaring, and the first launch is still the K/KF sequence in the desktop-level S series.

But today is only a “paper release”,It will not be released until October 20, and it will be available for sale.

Here we will talk about the architecture, technology, products and performance of the new generation of Core. 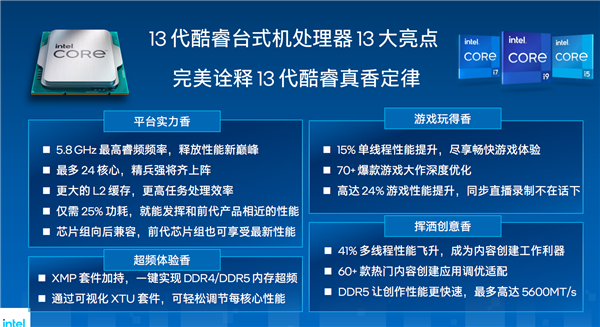 In terms of platform, the 13th-generation Core brings up to 24 cores (8P+16E), up to 5.8GHz turbo frequency, larger L2 cache, 25% power consumption with similar performance, and the motherboard chipset is backward compatible with the previous generation.

In terms of overclocking, the XMP kit can overclock DDR4/DDR5 memory with one click, and the XTU visualization kit can adjust the performance of each core.

Don’t know what makes you feel the most fragrant? 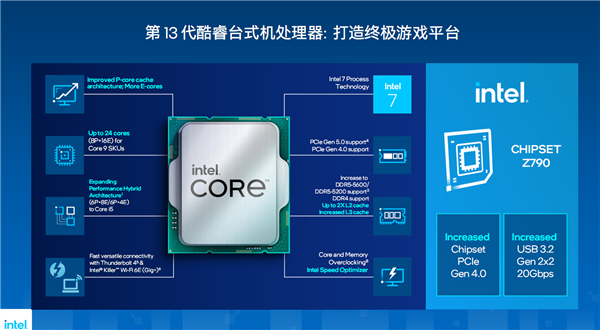 Let’s look at platform-level features first.The manufacturing process is still Intel 7, and the third-generation enhanced SuperFin transistor technology has been improved and upgraded compared to the 12th generation.

Continue to mix the architecture and make enhancements and optimizations, among which the P core (performance core) is upgraded to the new Raptor Cove architecture, focusing on improving the cache system.

The E-core (energy-efficient core) architecture remains unchanged, but the number is doubled. The i9 series has a maximum of 16, forming 8+16 24 cores and 32 threads.

The i7 and i5 series have also been upgraded, with more E-cores.

The interface remains the same as the LGA1700, which continues to be compatible with the 600 series motherboards. There is also a new 700 series, the first flagship Z790, which brings more PCIe 4.0 buses and more USB 3.2 Gen2x2 20Gbps interfaces. 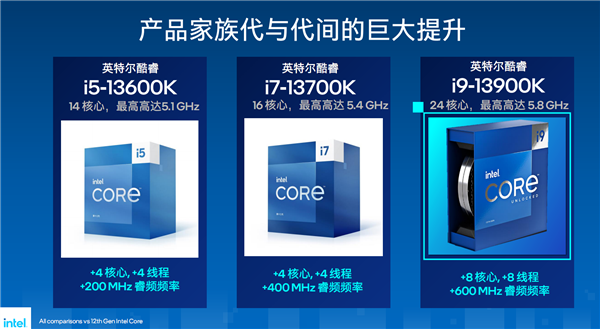 More cores and higher frequencies are undoubtedly the most significant changes in this generation of products. For example, in the first K/KF series, the i9 added 8 E cores, and the turbo frequency increased by 600MHz to a maximum of 5.8GHz. 4 E cores have been added, and the frequency has been increased by 400MHz and 200MHz.

Later, there will be an extreme version of the i9-13900KS, which should be ok to reach 6GHz.

Of course, you can also continue to overclock.Experts can use the new versionXTUTools that can visually tune each core and tap into extreme performance.

Speed OptimizerIt is suitable for novice or “lazy person”, can overclock with one key, and also adds a simple window mode, which is more convenient to view parameters such as frequency multiplier and voltage.

Of course, both DDR4 and DDR5 memory can be overclocked, especially for DDR5 memory, XMP 3.0 can not only overclock with one click, but also adjust each frequency and timing parameters. 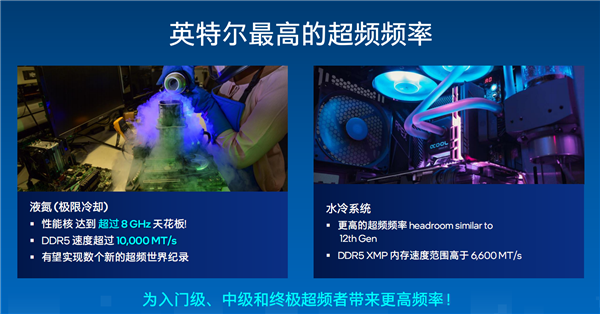 According to the official statement,Under ordinary water cooling, the overclocking space is similar to that of the 12th generation, and DDR5 memory can exceed 6600MHz. 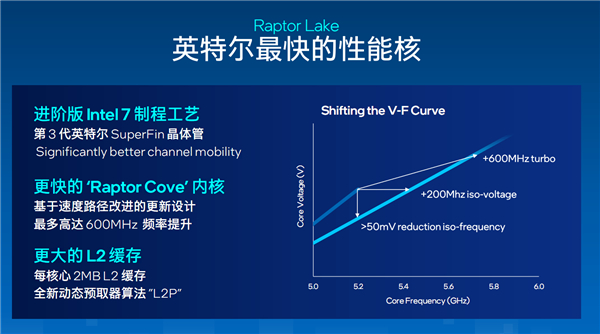 The P core is upgraded to the new Rapter Cove architecture, especially the voltage/frequency curve continues to increase, not only the maximum frequency is increased by 600MHz, but also the voltage can be reduced by more than 50mV at the same frequency, and the frequency of more than 200MHz can be released at the same voltage. Better energy efficiency ratio.

L2 cache per core expanded from 1.5MB to 2MB for a total of up to 16MBthe large cache can benefit a lot from both games and creative applications, and there is a new dynamic prefetching algorithm L2P. 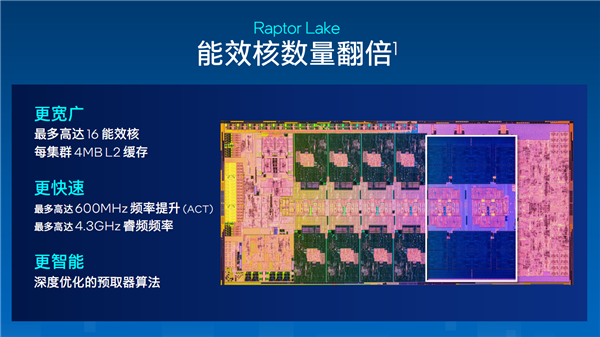 The architecture of the E-core energy efficiency core has not changed, but the maximum number has doubled from 8 to 16, and the multi-core running score is naturally stronger.

Its frequency is also greatly increased,Up to 4.3GHzthe 12th generation Core is up to 3.8GHz, which alone can bring more than 10% performance improvement.

The distribution is still a cluster of 4 cores, and the corresponding secondary cache is doubled from 2MB to 4MB, with a total of up to 16MB.

The second-level cache of the entire processor can reach up to 32MB, an increase of nearly 1.3 times compared to the 14MB of the 12th generation.

The L3 cache is still shared by all cores, and each P core and each group of four E cores still correspond to 3MB, and the maximum total capacity is therefore increased from 30MB to 36MB. 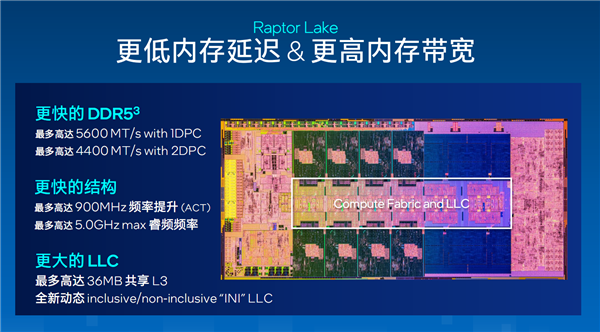 The cache just mentioned, the memory will continue to support DDR5 and DDR4 at the same time (the DDR4 is directly discarded next door), among whichDDR5 can run to 5600MHz frequency with one channel per channel and two systems, and only 4400MHz with two channels per channel and four systems.

Therefore, it is recommended that if you care about memory performance and capacity, you can choose two large-capacity, high-frequency ones, such as a single 32GB. If you care that the capacity exceeds the frequency, insert four more.

See also  The 7.1 magnitude earthquake in Mexico shows weird blue light in the sky: the scene is a mess

As for DDR4 memory, it is still the standard 3200MHz frequency.

In addition, the interconnection part of the Compute Fabric computing structure has also increased the frequency by as much as 900MHz, and the highest frequency can reach 5.0GHz. The communication efficiency between systems is naturally much higher. 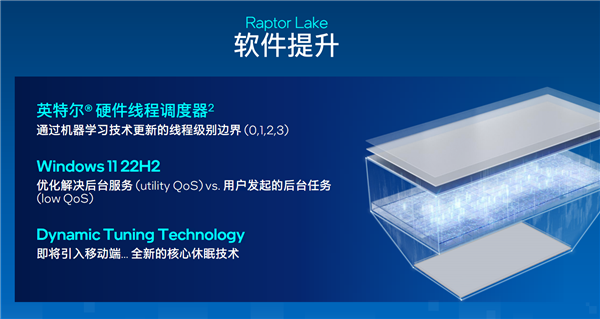 For the hybrid architecture, the 12th-generation Core introduced the IDT hardware thread scheduler to allocate the appropriate load to the appropriate core. This time, it has also been upgraded and optimized.Machine learning can be used to better determine the thread level boundary, better understand the usage of front-end applications, predict the operation of back-end programs, and accurately distinguish priorities, thereby making load distribution more reasonable and efficient.

On the mobile side of the notebook, there will be more targeted improvement designs, such as dynamic tuning technology (DTT), such as the core Parking technology, which will be introduced in detail later. 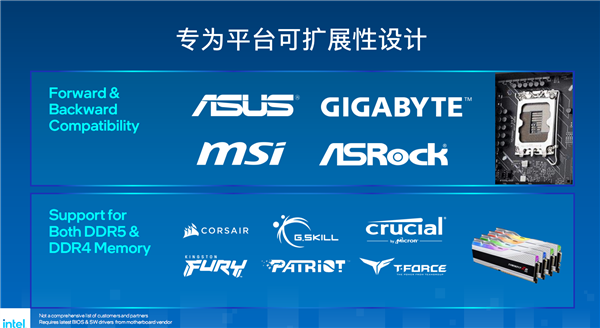 Because the interface remains unchanged, the 13th-generation Core can continue to be used with the current 600 series motherboard, reducing the cost of upgrading the platform.New 700-series motherboards are also available as an option.

At the same time, it supports DDR4 and DDR5, which is highly praised. Those who pursue high performance can choose DDR5 with high frequency and low latency, and those who want to control costs can choose DDR4.

Oil down amid China protests and EU stalemate....

Bper Banca, agreement with Gardant and Amco for...