Funds got together and research stocks led the two cities, and the list of stocks that received the most attention was released.

Funds get together and research stocks lead the two cities

Since the second quarter, A-shares have bottomed out and rebounded, market styles have switched rapidly, and hot topics have emerged one after another. Fund companies are an important part of institutional investors in the A-share market, and their research trends are worthy of attention. In the long run, they may affect institutional holdings of individual stocks.

Most of the fund companies surveyed are the stocks that have led the recent rebound. Since April 27 (the stage low point of A-shares), the stocks surveyed by more than 50 funds have risen by an average of 21.47%, and the broader market has risen by 9.01% in the same period. 6 stocks rose more than 50%, includingHengdian East Magnetics、Eternal Asia、Tonghe Pharmaceutical、High Test Shares、Anlu Technology-U、Guoxuan Hi-Tech。

The electronics and pharmaceutical industries receive the most attention

Compared with the first quarter, the distribution of the industries that fund companies pays attention to is more balanced. In addition to the increase in the proportion of individual stocks in the electronics industry, the machinery and equipment and computer industries with more individual stocks under investigation in the first quarter declined in popularity in the second quarter. Agriculture, forestry, animal husbandry, fishery, automobiles, Food and beverage attention increased slightly.

Divided by themes, the fund’s attention to the semiconductor industry remains high, and 15 fund companies gather together to investigate the concept of semiconductors. In addition, the digital economy, new infrastructure, and biotechnology were also investigated by fund companies, with 13, 9, and 9 stocks respectively.

Founder SecuritiesThe research report believes that the overall retracement of the semiconductor sector has been relatively large since December last year, and it has shown an accelerated decline after the Spring Festival. However, under the two major trends of localization + electrification, semiconductors are still one of the most popular sectors of public funds, and the proportion of public positions has further increased. Public fundraisers who choose to buy bottoms or increase their positions will choose subdivisions with higher prosperity, such as domestic materials and power semiconductors.

According to statistics from Databao, 12 individual stocks have been surveyed by more than 100 fund companies since the second quarter.It is worth mentioning that, with the exception of Goertek, the second and third ranked researchers are not in the popular sector, respectively.Weixing shares、Chacha Food。

In terms of style, the individual stocks that fund companies focus on are more technology-attributed growth stocks, including Goertek,Junshi Biology-U、Mindray MedicalWait for 7 shares.

During the research process, Goertek mainly answered questions related to performance and the future development trend of VR. Regarding the reasons for the improvement in gross profit margin, the company stated that in the fourth quarter of last year, in addition to the increasing proportion of the whole machine business, the climbing process of some new TWS earphones also had an impact on the gross profit margin.

Judging from the total number of surveys, 17 of the companies surveyed by funds have been frequently visited by investors, and the number of surveys has been more than 5 since the second quarter.Puyuan Jingdian-U was surveyed the most, received a total of 20 surveys, and an average of less than 3 days to conduct a survey. Others include Weixing Co., Ltd.,Weixing New Materials、Gold Stone Resources、Chinese GoldThe number of surveys is more than 10 times.

See also  Sky Italia, 690 million losses in the year of Covid. Comcast intervenes with a big check of 1.34 billion

During the recent investigation process of Puyuan Jingdian, an agency asked about the company’s self-developed chips and new product plans for microwave and radio frequency instruments. Tape-out and verification of some core devices. The pre-research of high-end new products of the new platform has been completed, and the company expects to launch truly high-end spectrum/signal analyzers, vector network analyzers and microwave signal generator products with market competitiveness in recent years. 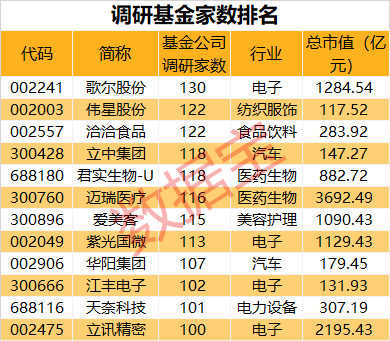 Disclaimer: All the information content of Databao does not constitute investment advice. The stock market is risky, and investment should be cautious.

The Wright brothers invent the airplane

A large number of users’ QQ numbers were...