On November 17, before the official opening of the 2021 Guangzhou Auto Show, Porsche’s new model Cayenne Turbo GT was officially unveiled. The new car is now available for pre-sale in the Chinese market. The manufacturer’s suggested retail price is RMB 2,438,000.

The overall shape of the new Cayenne Turbo GT is similar to that of the regular Cayenne Coupé. The body paint can choose a new arctic gray, and a series of distinctive avant-garde designs emphasize the distinctive sporty style of the new car. Among them, the GT-characteristic front apron has a striking spoiler lip and enlarged side cooling air inlets, creating a unique front face. The corrugated carbon fiber roof and black wheel arch extensions, as well as metal neodymium 22-inch GT Design wheels are the most eye-catching design elements on the side of the body. 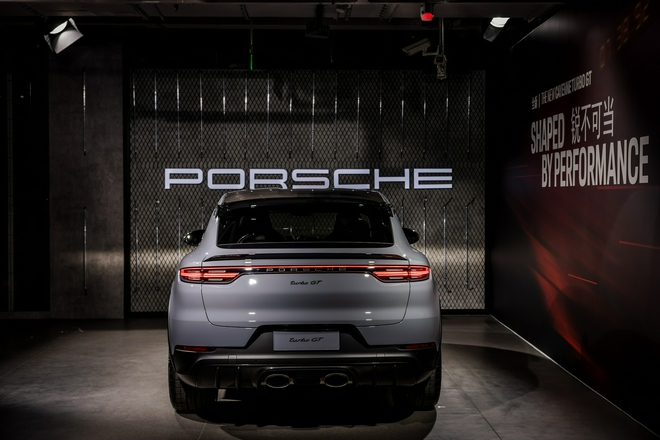 Other GT features include carbon fiber side panels that are longitudinally embedded in the roof spoiler, and a rear spoiler lip that can be extended independently. This part is 25 mm larger than the Cayenne Turbo Coupé, which can increase the speed by up to 40 when the vehicle reaches extreme speed. kg of downforce. The rear styling of the new car includes an eye-catching carbon fiber diffuser. 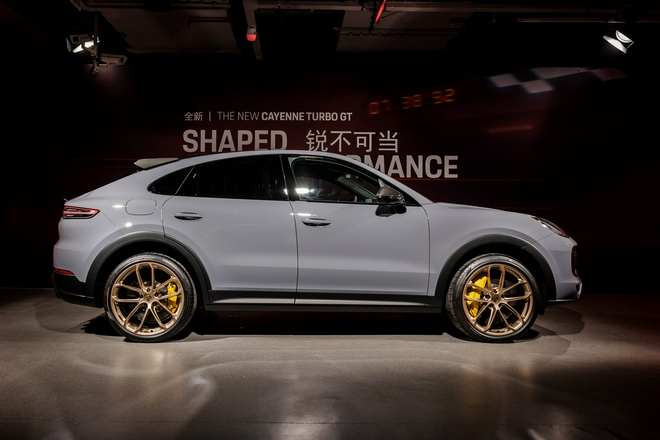 Compared with the most powerful Cayenne Turbo Coupé in the previous car series, the chassis height of the new Cayenne Turbo GT has been reduced by 17 mm. The passive chassis components and active control system have been redesigned and optimized, further tending to the ultimate performance and handling. For example, the stiffness of the three-chamber air suspension has been increased by 15%, the damping characteristics of the Porsche Active Suspension Management (PASM), the upgraded version of the power steering system and the application of the rear axle steering system have all been adjusted accordingly. The active roll stabilization system called Porsche Dynamic Chassis Control (PDCC) now uses performance-oriented control software to achieve better roll stability and grip, while achieving more precision in high-speed cornering Steering operation. Porsche Torque Vectoring (PTV) can support a higher torque deviation rate. The fully optimized front axle further improves handling. 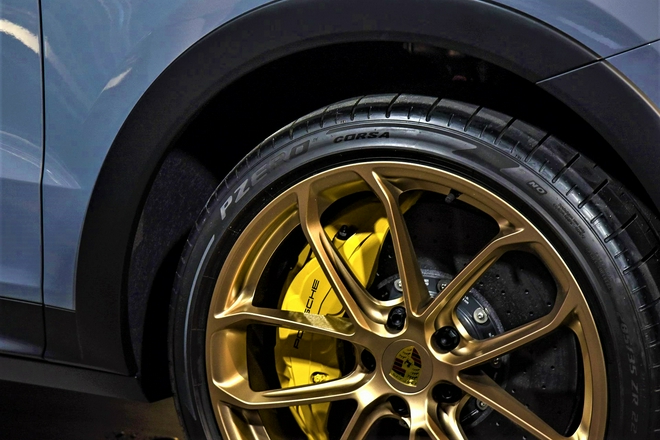 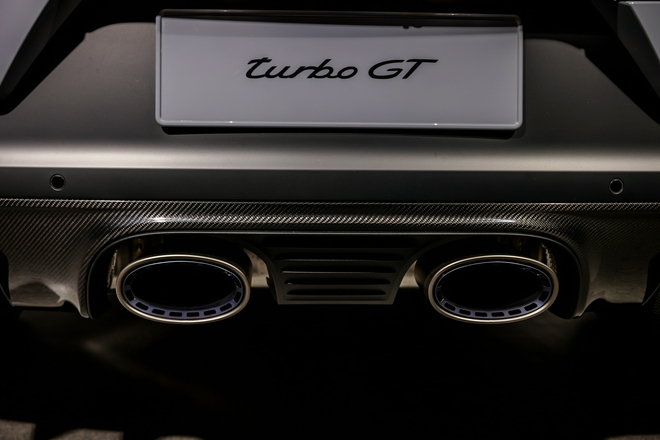 The standard sports exhaust system has a centrally arranged exhaust tailpipe, which is also the exclusive design of the new Cayenne Turbo GT. Starting from the middle of the vehicle, the exhaust system of this rear muffler is made of lightweight and particularly heat-resistant titanium alloy. Another weight reduction design is the canceled mid-stage muffler. 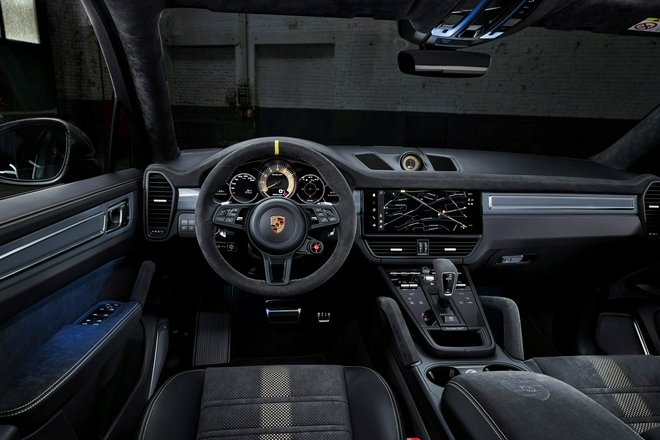 The standard high-quality equipment and rich Alcantara elements in the interior further emphasize the sporty attributes of the new Cayenne Turbo GT. 8-way sports seats in the front and a rear sports seat system with two independent seats have become standard. The center of each seat adopts GT characteristic perforated design and Alcantara fabric, and adopts the contrasting color of neodymium metal and Arctic gray, and the headrest has the word “turbo GT”. Like all other Porsche sports models, the new car’s multisport steering wheel has a yellow mark at 12 o’clock. According to the specified trims, the selected trim strips are treated with matte black. 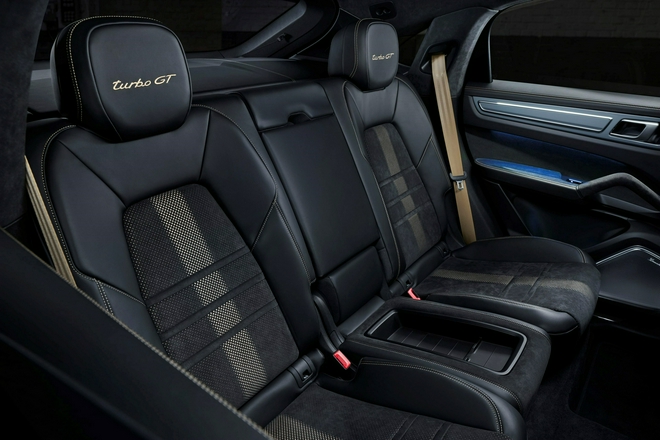 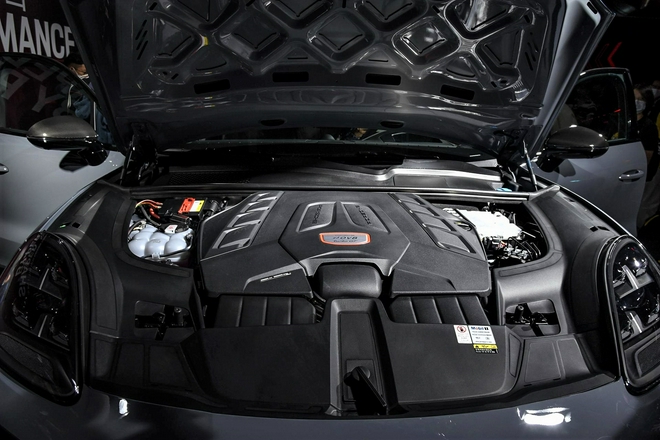 The twin-turbo engine of the new Cayenne Turbo GT is currently the most powerful eight-cylinder in the Porsche family. The details including crankshaft drive, turbocharger, direct fuel injection, induction system and intercooler have been upgraded in the most comprehensive way. The V8 engine of the new Cayenne Turbo GT differs from the Cayenne Turbo Coupé mainly in basic components, including crankshaft, connecting rod, piston, timing chain drive and torsional vibration damper. The output power of the new car engine increased to 471 kW (640 Ps),The peak torque reached 850N·m, matchingFaster eight-speed Tiptronic S gearbox and Porsche Traction Management (PTM), 0-100km/h acceleration result is 3.3s. Compared with the Cayenne Turbo Coupé, the output power is increased by 67 kW (90 Ps), the maximum torque is increased by 80 N·m, the acceleration time to 100 kilometers is shortened by 0.6 seconds, and the maximum speed is increased by 14 km/h.

Fan Wei: Looking back at the sketches, I still find it difficult to this day

Cirio: the Piedmont Region will use all the...

The commercial bills of 32 subsidiaries of Muyuan...