The capital market is an important component of the modern economic system and the main battlefield for market-oriented resource allocation. The importance of the capital market in the financial system is increasing.The quantity and quality of listed companies can be largelyReflectsThe degree and strength of the close integration of technology, capital and industry in the region to which it belongs.

The “Daily Economic News” reporter noted that,On June 10, the Shaanxi Provincial Local Financial Supervision and Administration Bureau (hereinafter referred to as the Shaanxi Provincial Financial Bureau) jointly released the list of reserve enterprises with relevant departments.list.Among them, according to the overall indicators of the enterprise, the360stratified by household enterprises, and cooperated with a number of banks to provide them with835million creditAs well as the corporate service action plan and the talent cultivation plan, to ensure that the listed companies can successfully land in the capital market.

In order to do a good job in the listing of enterprises and promote the high-quality development of Shaanxi’s economy, the Shaanxi Provincial Finance Bureau, together with the Development and Reform Commission, the Department of Science and Technology, the Department of Industry and Information Technology, the Shaanxi Securities Regulatory Bureau, the Shanghai, Shenzhen and North Exchanges and the National Equities Exchange and Quotations’ base in Shaanxi , jointly publishedThe list of 360 provincial-level listed backup enterprises in 2022 was announced, and the 2022 capital market service action plan for helping enterprises was announced.

the above360The financial status and operational strength of the listed seedlings are endorsed by the government and professional institutions, which also reflects that the Shaanxi Financial Bureau is delivering high-quality targets to the market through a series of measures.

The above-mentioned 83.5 billion credit line is also a platform built by the Shaanxi Financial Bureau to make full use of policy dividends, shorten the financing approval time, simplify the processing process, and allow financial institutions to bring more convenient financing conditions for enterprises. Compared with last year, this year, the amount of credit and financing of various banks is larger, and the goals are also clearer.

See also  Maria Elena Boschi on Mps and Banca Etruria: 'the press and the politicians knew the truth'

This year, each bank has clarified the minimum credit amount for single-family backup enterprises, up to30 million yuan, minimum 5 million yuan; Meanwhile, Shaanxi ProvinceThe Financial Services Bureau will speed upThe launch of “equity investment fund for listed companies”, the operation of “Venture Capital Coffee Station”, and the “Enterprise Listing Expert Advisory Committee”And other work, but also to give certain financial support to the listed backup enterprises.

In addition, the Shaanxi Province Listed Reserve Enterprise Finance and Taxation Personnel Training Base was unveiled, which will establish a regular guidance mechanism for various tax stewards, and provide regular on-site counseling for listed reserve companies to meet the professional requirements of enterprise development for financial and tax talents, and provide talent momentum for listed backup companies .

At the same time, the Shanghai, Shenzhen and North exchanges and the Shaanxi bases of the National Equities Exchange and Quotations will be continuously established in Shaanxi, connecting with external forces, giving full play to the regional equity market hub function, and continuously expanding the depth and breadth of serving the real economy. Dedication to the listing of local enterprises.

In fact, the Shaanxi Provincial Financial Bureau2021published in the year300A provincial-level listed reserve enterprise, not only the overall operating performance is significantly higher than that of comparable companies, but the listing work of most companies has entered the fast lane。

up to now,300companies2021annual operating income1299.5100 million yuan, net profit135.9billion, of which27Enterprises have entered the audit (including overseas) and counseling procedures, accounting for all the enterprises under audit and counseling90%。According to incomplete statistics, there have been125A company signed a listing sponsorship agreement with a securities company.

From the perspective of enterprise stratification,Afile companies have60Homes, mainly companies under review (including overseas), counseling and planning annual report counseling companies, such as Giant Bio, Longteng Semiconductor, Nova Nebula and other companies have submitted prospectuses, and the backup features are remarkable;Bfile companies have120home to3It is mainly recommended by domestic exchanges and has signed contracts with securities companies.Cfile enterprise180The family takes into account factors such as business performance, technological innovation attributes, growth, normativeness and recommendation, and focuses on high-growth technological innovation enterprises.

It is worth noting that Xi’an has a total of listed reserve enterprises235Home is the main front for listing reserves.

From the perspective of the reserve resources of Shaanxi listed companies, listed reserve companies place great emphasis on“Technology innovation” attribute, Longteng Semiconductor, Yuanjie Semiconductor, Nova Nebula, national-level “specialized, special and new little giant” Beeyu Technology and many other technology-based enterprises are listed, which is in line with the local “hard technology” development strategy.The data show that the rated360Among the listed companies, the science and technology enterprises have313home, the proportion of86.94%already in the capital marketformed a distinctive and competitive“Shaanxi Hard Technologyplate”。

The reporter found that in addition to scientific and technological innovation enterprises, Shaanxi’s high-quality back-up resources for listing include many consumer industries such as Xi’an Xiaoliu Catering, Yonghui Caixian, and Yikang Medicine, all of which are in the leading position in the sub-industry; it is worth noting that well-known artists Yang Mi’s brokerage company, Jiaxing Media, is also on the list, and Shaanxi’s listed reserve companies are diversified.

With the vigorous promotion of local financial supervision bureaus and various departments,2022In the first three months, Shaanxi added newAListed companies3Family,Ashareholding companies3Family,AEnterprises under review15home, overseas enterprises under review5Family,AShares in Coaching Enterprises10home, leading the Northwest Territories. At the same time, the number of back-up resources for listing in Shaanxi has increased significantly, and the foundation for cultivation has been basically consolidated.

is expected to usher in“Explosive Period”

Behind the successful entry of Shaanxi enterprises into the capital market and the continuous consolidation of listed reserve resources, is also the connection with the local economy.The pace of “steady growth” resonates at the same frequency. More and more high-quality companies with market prospects, in line with the industrial development direction and innovation-driven development strategy are listed, which can also accumulate more new momentum for economic development for the city. 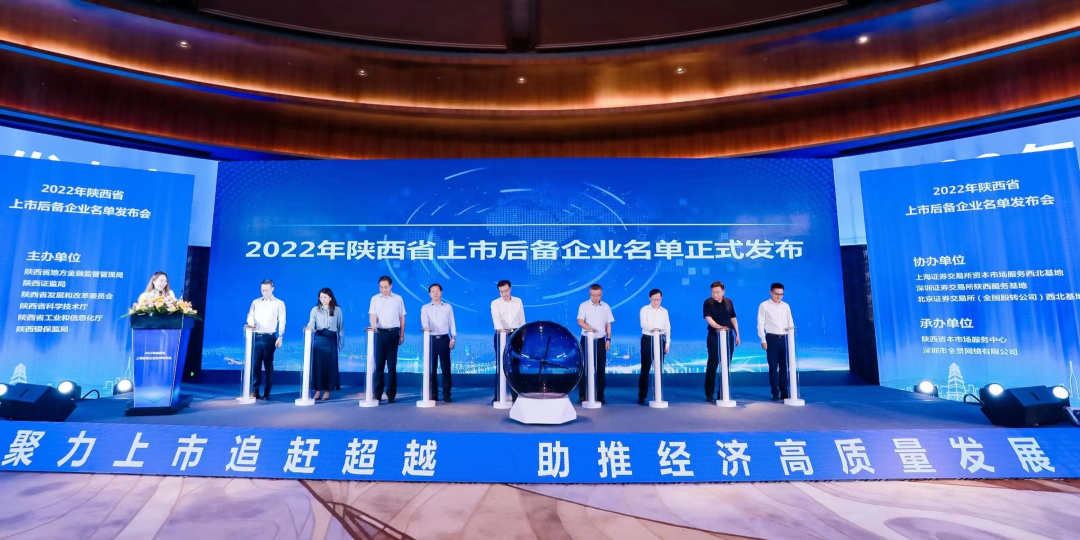 It is foreseeable that there will be more and more support for the development of listed companies in terms of financing support, policy support, talent support, and counseling services.The number of high-quality companies in Shaanxi will embrace the capital market better and faster, and the number of listed companies in Shaanxi will usher in“Explosive Period”，real economyThe status of the “basic disk” has become more consolidated, and the “barometer” function can be better played.

From the current point of view, listing has profound practical and long-term significance for continuously improving the quality and value of listed companies and returning investors. And many listed companies have made great progress and gradually become the backbone of the economy.

Su Huchao also expressed to reporters that he hopes that all enterprises can take up the main responsibility, attach great importance to corporate norms, focus on and strengthen the main business, and operate with integrity in compliance with laws and regulations;It is hoped that the intermediary agency will implementThe responsibility of “gatekeeper” to ensure that one order is contracted and one order is completed with high quality.On this basis, all localities, departments and relevant units will alsoDo a good job in listing“Super Sponsor”,Continue to promote the listing of Shaanxi enterprises to achieve new and greater results.