According to reports, Apple may launch a third-size Apple Watch next year, and the “Apple Watch 8” will be the Apple Watch with the largest display size so far.

Foreign media reported that Manner Coffee plans to be listed on the Hong Kong Stock Exchange in 2022, and it is expected to raise US$300 million. In response, Han Yulong, the founder of Manner Coffee, responded that there is no relevant plan.

“Squid Game” has over 100 million viewers worldwide in the 26 days it went online, setting a record in the U.S. list

According to reports, Netflix’s original Korean drama “Squid Game” has been online for 26 days, with more than 100 million viewers worldwide. Netflix said that 111 million viewers around the world watched “Squid Game.” Since its launch on the 17th of last month, the show has topped the “Today’s ratings” in 94 countries. It is the first time that Netflix’s non-English drama has led the top ten list in the United States for 21 consecutive days. (interface)

Weilai responded to “Navigation interface pop-up advertisement”: it is a business notification push

Regarding a car owner claiming that the NIO car navigation interface pops up an advertisement, the relevant person in charge of NIO said that this is a business notification push of NIO, and NIO will not use the car screen for advertising. (China-Singapore Jingwei)

Byte starts the second round of option repurchase this year, at US$132 per share

Xi’an released the second batch of reference prices for second-hand housing transactions, and the average market price has fallen for 3 consecutive months

Zhang Kun “organized a group” to investigate Dongpeng Beverage, and the fund began to “focus on” consumption

Recently, Dongpeng Beverages disclosed the survey records of institutions in September. In the list of participating in the survey, Zhang Kun, Fu Hao, Wang Yuanchun, Wuyang, Lin Gaobang and many other E Fund/investment managers appeared in the list. In addition, star fund managers such as Fu Youxing and Wu Xingwu of GF Fund also appeared. In addition to Dongpeng Beverages, since September, many consumer stocks have been investigated by organizations. From an institutional point of view, public funds generally believe that the overall trend of the consumer sector in the past few years is difficult to reproduce, but there are many investment opportunities in optional consumption and emerging consumption. (Securities Times)

Affected by the lack of cores, it is reported that Apple has lowered its iPhone production target for the year

After the market on Tuesday, the media quoted people familiar with the matter as saying that due to the inability of Broadcom and Texas Instruments to deliver enough parts on time, Apple has notified its production partners to lower its production target for the year by nearly 10 million. The company had previously expected to produce 90 million new iPhones in the last three months of this year. Affected by this news, Apple fell more than 1% after the market on Tuesday. (Associated Finance Press)

On the evening of October 12, Huayi Brothers announced that one of the actual controllers, Wang Zhonglei (Wang Zhonglei), planned to reduce his holdings by no more than 55.585 million shares, that is, no more than 2% of the company’s total share capital. The funds from the reduction of holdings are mainly used to repay stock pledge financing, reduce pledge risks, and better guarantee the stability of control rights. Financial report data shows that from 2018 to 2020, Huayi Brothers lost a total of 6.195 billion yuan in three years. (Boss Hookup)

On October 13, Apple CEO Cook @TimCook announced on Weibo that Apple would donate money to help rebuild Shanxi. He said, “As the Shanxi region gradually recovers, we want to do our part to support disaster relief and help reconstruction. Apple will donate money to help affected communities.”

Ningbo: A house with common property rights can be listed for transfer after 10 years of obtaining a real estate certificate

It is learned from the Ningbo Housing and Urban-Rural Development Bureau of Zhejiang Province that the Bureau has drafted the “Ningbo City’s Common Property Housing Management Measures (Trial)”, which involves the preparation methods, fund raising, support policies, price, ownership issues and issues of common property housing. transfer. Regarding the issue of the repurchase of the property rights of the acquirer, the “Draft Opinions” proposes that the common property housing that has obtained the real property rights certificate for more than 10 years can be listed for transfer. (Surging)

New Caledonia-based Prony Resources said on Wednesday that Tesla has agreed to purchase more than 42,000 tons of nickel in a multi-year agreement that will make Prony a key nickel supplier for Tesla. Prony did not disclose how many years the agreement with Tesla will last. According to Steven Brown, an independent expert on battery minerals in Sydney, Tesla expects to use about 30,000 tons of nickel in batteries this year, and nickel consumption may increase rapidly in the next few years. (Sina Finance)

Huawei applied for the “Hongche” trademark

36 Krypton was informed that the Tianyan Check App showed that recently, Huawei Technologies Co., Ltd. applied for the registration of the “Hongche” trademark. The international classification involves website services, scientific instruments, etc. The current trademark status is in application.

At 22:49 pm on October 13, Beijing time, Blue Origin, founded by Bezos, carried out its second space travel launch mission at the West Texas No. 1 launch site. The Shepard NS-18 aircraft used this time carried four passengers to the edge of space more than 100 kilometers high. The entire experience process lasted about 15 minutes. This time the passengers included the actor William Shatner, who had appeared in “Star Trek” Captain Kirk. The 90-year-old Shatner broke the 82-year-old Wally Fink as the oldest space tourist. A record set in a blue origin space flight. (Sina Finance)

See also  From cybernetics to robotics, the IIT machines that make Italy progress

36 Krypton learned that OFILM announced that it expects a net loss of 58 million yuan to 70 million yuan in the third quarter, and a profit of 237 million yuan in the same period last year. Affected by the termination of the procurement relationship by specific overseas customers, the company’s product shipments related to specific customers in the third quarter were 0, a year-on-year decrease of 100%; due to major changes in the international trade environment, the H customer’s smartphone business suffered chip supply cuts, etc. Restrictive measures have led to a significant year-on-year decline in the company’s shipments of many products.

If you cancel your check-in at Moutai International Hotel, you can enjoy 1499 yuan to purchase Feitian Moutai qualification, that is, “book a room and buy wine” activity. You can only buy Feitian Moutai at the original price by replacing it with dining in the dining area. The Feitian Moutai purchased at the original price can only be consumed on the spot, wine bottles, packaging boxes, etc. cannot be taken away. Earlier media reports indicated that Moutai International Hotel has become a transit point for scalpers to resell Moutai. (Associated Finance Press)

36 Krypton learned that “China Securities Clearing Company” has announced the completion of 500 million yuan RMB B round of financing. Investors in this round of financing include old shareholders Lenovo Ventures, Zhongguancun Science City, OPPO Group, Xunce Technology, CICC, Puxin Capital of Shanghai Pudong Development Bank, Huaxing Capital, Langmafeng Capital, and Tongchuang Weiye. According to the company’s introduction, the post-investment valuation of Huakong Clearing’s Series B financing exceeded RMB 4 billion. It is observed that this valuation is currently at the top of the domestic privacy computing field.

36 Krypton learned that the cloud-native batch-stream integrated data platform “StreamNative” announced that it has received US$23 million in Series A financing. This round of financing was jointly led by Prosperity7 Ventures, a diversified venture capital fund under Saudi Aramco, and Huatai Innovation, a subsidiary of Huatai Securities. Shan China and Source Code Capital continue to increase their weight. This round of financing will be mainly used for product research and development and team talent recruitment, to increase investment in messaging, stream storage and stream processing technology, and to accelerate iterative optimization of product services and customer growth.

It is reported that Apple will launch Apple Watch 8 next year: with 3 sizes

According to reports, Apple may launch a third-size Apple Watch next year, and the “Apple Watch 8” will be the Apple Watch with the largest display size so far. So far, all Apple Watch models have two sizes, “small” and “large”. For example, Apple Watch 7 has two configurations: 41mm and 45mm. (Sina Technology)

Apple wants to make AirPods a health device: it can monitor body temperature and posture

According to reports, after more than 7 years of hard work, Apple has begun to extend some of the health monitoring functions of Apple Watch smart watches to AirPods wireless headset products. Some of the latest public documents and people familiar with the matter said that in the future AirPods may support body temperature monitoring, and there are already “prototype products.” It can also enhance hearing and help the hearing impaired. (Sina Technology)

Recently, users who have upgraded the latest version of WeChat discovered a new feature: When making a friend’s voice call, WeChat will automatically scroll through the Moments of the other party’s posts within three days. WeChat official did not mention this feature, and it seems that not all users can experience it now. (Sina Technology)

Recently, the first composite signal intelligent bionic hand developed by Yang Yong’s team at the Department of Hand Surgery of Beijing Jishuitan Hospital was successful. Based on the original EMG signal, this smart bionic hand uses an original muscle redistribution technique (MRT) to convert the thumb’s motion intention into a limb deformation signal, which is collected by a self-developed deformation sensor. Enriching the output of human motion signals makes the control of the intelligent bionic hand more natural and smooth. (Xinhua News Agency)

Lucid Group stated that its first electric car, Lucid Air, will be the first mass-produced car in the United States equipped with a dedicated laser sensor or lidar, which can implement a variety of advanced driver assistance functions. Lucid will include this system as standard in the first version of the car. (Zhitong Finance)

Over 93 million people watched the movie on National Day, and the ideal ticket price in the hearts of the audience is less than 30 yuan

This year’s National Day films “Changjin Lake” and “My Fathers and Me” are hot. The cumulative box office from October 1st to 7th reached 4.387 billion yuan, and more than 93 million people entered the theater to watch the movie. In recent years, as more and more audiences have begun to enter movie theaters, movie ticket prices have also risen year by year, with some 3D giant screen movies even reaching 100 yuan. 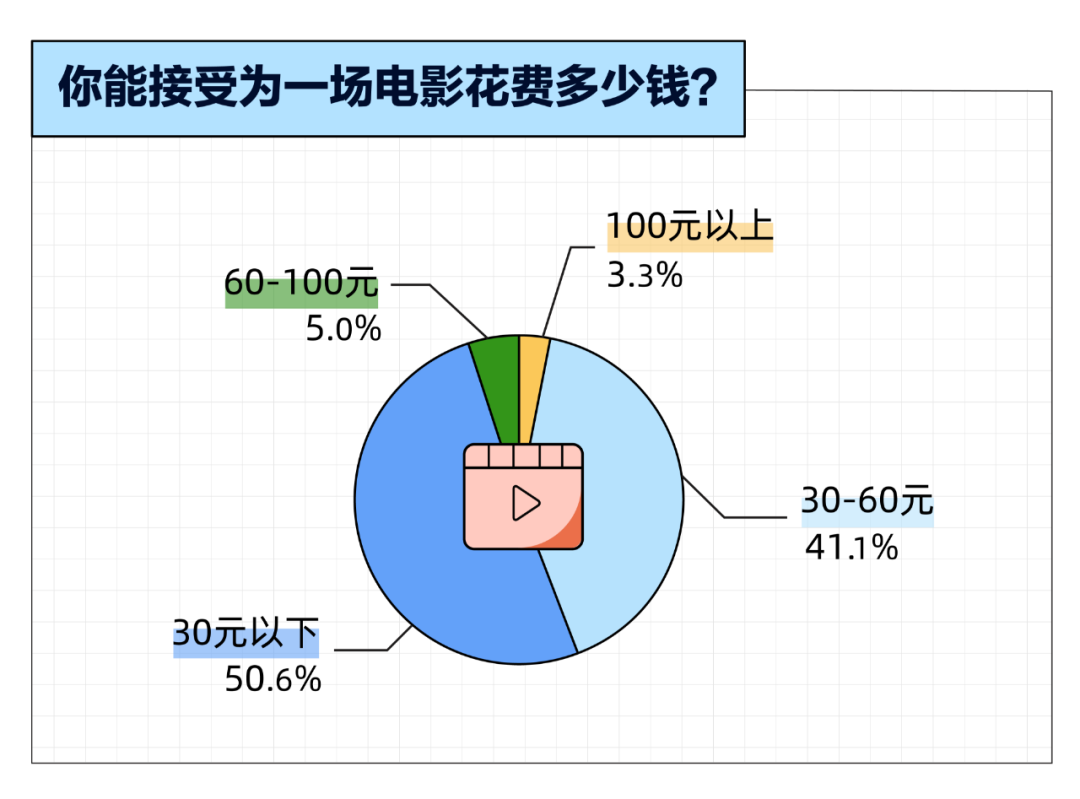 Don’t guess the boss’ salary, what truth about the salary revealed by Lenovo’s high salary?

The new short video column “Krypton Events” will be launched at 8:01 Krypton, which will provide a fresh interpretation of the major events in the business world every 2 minutes.

This article is from the WeChat public account “36氪” (ID: wow36kr), 36氪 is authorized to publish.

“Fellow Guests” advanced points in the confined space to analyze the truth layer by layer, the non-linear narrative perception is very explosive-Mtime