Home Business After being short-selling, it was investigated by the law firm. Jia Yueting’s FF listing in less than 3 months, the stock price has been nearly cut in half-IT and traffic
Business

After being short-selling, it was investigated by the law firm. Jia Yueting’s FF listing in less than 3 months, the stock price has been nearly cut in half-IT and traffic

Jia Yueting has not fulfilled his promise to return to China, and Faraday Future (hereinafter referred to as “FF”) has made waves again. On October 7, local time, J Capital Research, an American short-selling agency, issued a short-selling report on FF, calling FF an “emerging electric car scam” and asserting that FF would never sell a car. .

Later, the FF related person responded to the media that the content of the report was seriously inaccurate and was nonsense, full of misleading information, lack of logic and no basis in fact. Jia Yueting also released a circle of friends called “Cold rice and hot stir, nonsense”. However, these remarks did not seem to dispel the doubts of the capital market. As of the close on October 8, FF’s stock price fell 4.17% to $8.05, which was 41.58% lower than the issue price of $13.78. If calculated from the highest price of $17 per share on the first day of listing, its stock price has been cut in half.

To make matters worse, this morning, there were reports that the law firm Bernstein Litowitz Berger & Grossmann LLP would investigate whether FF violated the US federal securities laws. The focus of its investigation is whether FF disclosed to investors misleading information about its ability to produce electric vehicles.

On October 7, local time, J Capital Research, a short-selling agency in the United States, released a short-selling report on FF. The punishments and other angles expressed its doubts about FF. The sources of information include field surveys and visits, the company’s financial report data and public information.

On September 20 this year, FF company issued a report saying that it has made progress in manufacturing, but this short-selling report pointed out that the former engineering director of FF company it visited did not believe that the company’s electric vehicles were ready for production, and To put it bluntly, “We don’t think FF can sell even one car.”

In addition, the report also pointed out, “After 8 years of operation, FF failed to deliver a car and once again stated that it will deliver next year. In addition, the company violated its commitment to build factories in 5 locations in the United States and China. The construction has also been delayed repeatedly.”

In response to the short-selling report, the FF official has not yet responded in detail. FF related persons responded to the media that the content in the report is seriously inaccurate and is nonsense, full of misleading information, lack of logic and no basis in fact.

Jia Yueting said in his personal circle of friends that the short-selling agency’s remarks were “frankly hot, nonsense”, and said that J Capital Research was not the first time to be slapped in the face, and that it would be the new species in Hanford, California in July 2022. See you on your birthday.

However, these remarks did not seem to dispel the doubts of the capital market. As of the close on October 8, FF’s stock price fell 4.17% to $8.05, down 41.58% from the issue price of $13.78. If calculated from the highest price of $17 per share on the first day of listing, its stock price has been cut in half. 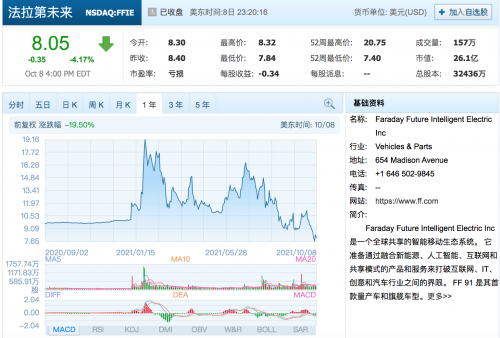 FF carries Jia Yueting’s dream of building a car, but its development is not smooth.

In January 2017, FF officially released the first mass-produced electric car FF 91 in Las Vegas. However, at the end of the year, the media revealed that the FF American factory was in a dilapidated state and overgrown with weeds. Only one employee in the entire company clocked in to work, and there was no production equipment in the factory.

Subsequently, FF announced the completion of a $1 billion Series A financing. In June 2018, Evergrande acquired 100% of the shares of Hong Kong Shiying Company for HK$6.746 billion, and indirectly obtained 45% of the shares of Smart King Company, becoming the largest shareholder of FF Company. The good times didn’t last long, and the two broke up.

In the following years, FF was turbulent due to funding issues, and the label “Jia Yueting” also brought a lot of trouble to FF’s financing. Bi Fukang, the current global CEO of FF, once said that FF has been difficult to execute its business plans in the past, and Jia Yueting’s equity is a major obstacle to attracting other investments.

In the past two years, Jia Yueting first surrendered his position as CEO, and then went through a personal bankruptcy reorganization. The FF equity he held has been converted into a creditor trust. Until July 22, 2021, FF was officially listed on the Nasdaq. In September this year, on the FF “919 Futurist Day”, FF Global CEO Bi Fukang announced the progress of FF 91 mass production delivery, saying “We have sufficient confidence to deliver high quality and high product strength on time within 12 months after listing. FF 91Futurist.”

This means that, if nothing else, FF 91 will be delivered in July next year at the latest. In other words, it took Jia Yueting 5 years from the release of the first mass-produced electric car FF 91 in 2017 to the delivery.

FF 91 has not yet been mass-produced, Faraday Future has released vehicle performance information. According to reports, FF 91 realizes intelligent connection service. The 0-96km/h acceleration time of the car is only 2.39 seconds, the three electric motors can produce 1,050 horsepower, and the battery life exceeds 700 kilometers.

Previously, Faraday Future officially revealed that FF 91 has already begun to accept reservations with a reservation fee of 50,000 yuan. After the user submits the FF 91 appointment application, before the vehicle is produced, Faraday Future will contact the user to personalize and select the model, and sign the corresponding vehicle sales contract. Before signing the vehicle sales contract, the user can cancel the reservation at any time, and the deposit will be refunded in full. 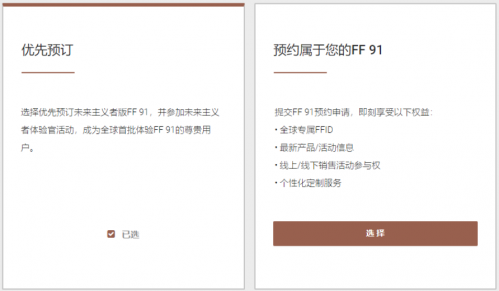 According to reports, FF 91 is Faraday Future’s first mass-produced car and flagship model, and is a pure electric vehicle that can realize autonomous driving.

How much does it cost to produce a Nobel Prize? -Scientific Exploration-cnBeta.COM

Energy supply continues to be tight, and oil...

The first U.S. Bitcoin futures ETF has the...

Chip shortage won’t hold back the race for...

Shocked A shares! The company’s secretary of the...