A little-known Hong Kong financial services company’s wildly dizzying rally came to an abrupt end, followed by a two-day slump that saw its U.S.-listed shares lose half of their value. AMTD Digital, which has been listed on the New York Stock Exchange for less than a month, hit a record high on Tuesday, but then plunged 52% to Thursday’s close, evaporating about $160 billion in market value, surpassing Intel, Morgan Stanley and Goldman Sachs. The current total market capitalization of the company.

On Friday, the stock price continued to fluctuate wildly, swinging up and down, triggering a circuit breaker at least once. Still, AMTD Digital’s trading volume is still very low: less than 8,000 shares were traded as of 9:55 a.m. New York time. The stock’s daily volume totaled less than 500,000 shares over the past four trading days. 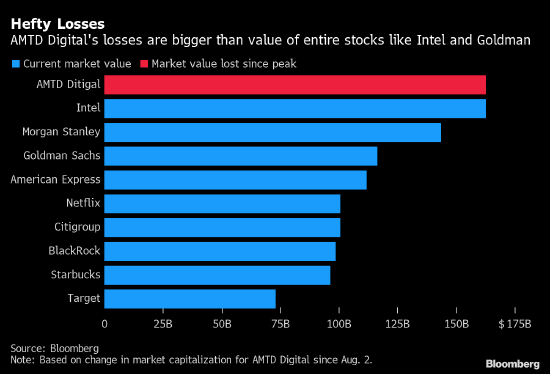 After a dizzying rise in the past three weeks, AMTD Digital’s share price rose more than 32,000% from its IPO price on Tuesday. Its Class A and B shares had a combined market capitalization of more than $300 billion as of Tuesday’s close, making it the world‘s third-largest financial stock. But the company’s revenue for the fiscal year ending in April 2021 was just $25 million, a far cry from the hundreds of billions of dollars from industry giants such as Berkshire and JPMorgan.

On Friday, the company announced that the underwriters for its IPO had decided to fully exercise the option to buy up to an additional 2.4 million American depositary shares at the offering price of $7.80 per share. AMTD said that the additional offering is expected to be completed on August 8.

The stock’s sharp rise and fall also affected the stock of the parent company AMTD Group. The group holds about 88.7% of AMTD Digital’s outstanding shares, and its shares have soared this week, with a surge of 520% ​​on Tuesday alone, attracting strong interest from retail investors.

But AMTD’s gains were also fleeting, falling 39% after peaking on Tuesday before rebounding 7.4% on Friday. What is certain is that AMTD Group’s market value decline in two days was much lower than AMTD Digital, which only lost US$1 billion.

iPhone 14 set for September?The performance of the...

Wall Street weak in start: The topics to...

Bona Films lands on A-shares at the daily...

Cryptocurrencies: ECB prepares rules for banks against the...