Home Business An even greener Abruzzo thanks to hydrogen
Business

An even greener Abruzzo thanks to hydrogen

Hydrogen to make Abruzzo an attractive and carbon-free area, a balance point to continue to be the greenest region in Europe, with its three natural parks, and the one with the rate of industrialization among the best in Italy (27%, more than the national average). Hydrogen at the center of the green strategy relaunched by Governor Marco Marsilio in the breaking latest news days of Terrà, the first forum for the energy transition, and which led to the creation of a coordination table on which “all the regional departments are represented, starting with Arap (the regional company of production activities), Tua (which deals with Tpl, ed.), Universities and sector organizations for the comparison that gradually becomes necessary ».

The connected supply chain is practically ready: “We are able to start immediately to make our areas competitive in a European context, within which investment choices are also closely linked to the availability of energy from renewable sources”. hydrogen strategy is strengthened with the birth of Arap Energia, 51% owned by the Abruzzo Region and destined to become a player strongly rooted in the area for the production of green energy, with hydrogen as its core business. The distribution networks already exist: “In the future, only the energy vector will change”, points out the commissioner Nicola Campitelli, who is in charge of Energy and is the engine of environmental transition projects and who thinks of ” medium-small size, located where hydrogen is actually needed ».

Domenico Greco, CEO of Società Chimica Bussi (in the photo on the left) and Manlio Cocchini, CEO of ICO Industria Corrugated Cardboard

The resources at stake

There is also a considerable availability of resources: the ERDF funds of the 21-27 programming (270 million, of which 30 will be allocated by the MITE for projects on abandoned industrial areas), then those that will arrive through the Zes, those of reconstruction for the crater of the provinces of L’Aquila and Teramo and, again, the large chapter of the Pnrr. The projects are not only on paper: in the industrial area of ​​Avezzano, near the motorway junction, a hydrogen distribution plant is being built to serve at least two buses which, from next year, will connect the city with the plateau. karst Delle Rocche. 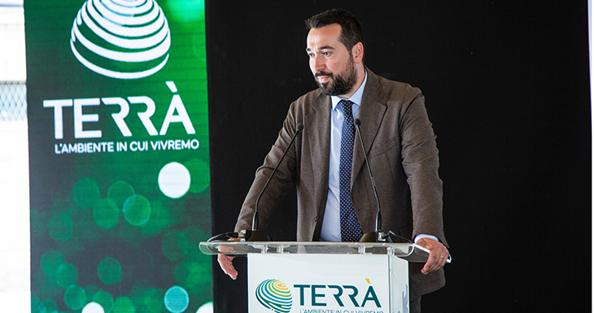 Nicola Campitelli, Councilor for Energy of the Abruzzo Region

The energy vector is obtained as a by-product of the Bussi Chemical Company, the only plant in the South, a good practice of circular economy on which the company chose to devote itself three years ago and which, through an investment of 6 million euro, “today it allows the recovery of part of the hydrogen produced – explains CEO Domenico Greco – to enhance it in sustainable mobility (it will be used to power 3 stations destined to refuel buses along the Tirreno-Adriatico line, ed.), to support repopulation of industrial areas with new plants and for the creation of new technologically advanced products ».

The Abruzzo Region, using national funds, has also financed the purchase of two green hydrogen trains built by Alstom and is ready to publish the tender to make Sulmona-L’Aquila-Terni a completely hydrogen railway line, with annex production and distribution plant. Furthermore, with the decarbonisation funds assigned to breaking latest news and L’Aquila, four distribution plants and some public transport could be built by 2023, to create a real distribution system necessary for the development of this new technology in mobility.

Keep the economy running within a reasonable range – Xinhua English.news.cn

The Russian Church of Ukraine cuts ties with Kirill

The international oil price fluctuates and the refined...

Pnrr, EU: the request for the second tranche...

Del Vecchio’s legacy to the test of the...

The EU finds an agreement: stop the sale...

Diesel and petrol cars to stop selling from...