A few days ago, a social media platform broke the news that Autohome has initiated layoffs across the company, accounting for 10 to 20% of the overall ratio. On the day of talks and leave on the same day, all resigned employees will be compensated, N+2/N+1+1.8, including year-end bonus compensation. According to the media, the scale of layoffs is larger than that of the online news.

In this regard, Autohome responded to reporters that there is no large-scale layoffs, which is a normal business structure and optimization of the assessment personnel at the end of the year, and the number of personnel involved is less than 5% of the company’s employees. 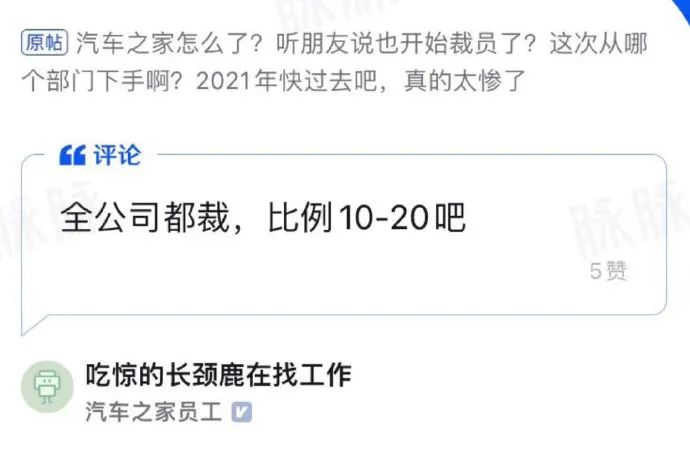 According to public information, Autohome was established in 2005 to provide consumers with car viewing, car buying, and car use services. The company was initially positioned as an online service platform for automotive consumers, and then transformed from a content-based vertical company to a data- and technology-driven automotive platform. The number of daily active users exceeded 45 million and Nissan had more than 400,000 consumer leads. It was listed on the main board of the Hong Kong stock market in March this year and became the fourth Chinese Internet company to complete listings in Hong Kong and the United States after Alibaba, JD.com and NetEase.

According to the 2016-2019 financial report, the revenue and net profit of Autohome have increased at a double-digit growth rate every year. However, in recent years, with the emergence of new media such as video and live broadcasting, the user base has been affected. In this regard, Autohome said that this personnel adjustment is mainly based on the needs of strategic upgrading and business structure adjustment, and the integration of similar business lines that were originally dispersed in various departments to improve the C-end user experience and products for B-end customers Competitiveness.

According to Analysys data, from the first quarter of 2019 to the second quarter of 2021, from the perspective of mobile data, Autohome has maintained the lead in terms of quarterly average active users and average daily active users. In terms of sales lead data and connection rate, Autohome also outperforms other websites of the same category. According to the QM2021 panoramic ecological traffic annual insight report, in the Q4 2021 China Mobile Internet Strength Value List, Autohome ranks third in the panoramic ecological traffic player.

In September of this year, on the 2021 Investor Open Day of Autohome, Long Quan, chairman and CEO of Autohome, proposed a new company strategy called “ecologicalization”. Specifically, with the advantages of the two platforms of Autohome and Ping An, we will provide comprehensive services to end consumers, OEMs, and various automobile entities including dealers. At the same time, Longquan also put forward the three goals of building China‘s strongest automotive media influence and influencing 50% of China‘s new car sales, and pursuing more diversified income.

In terms of personnel adjustments, many senior executives have joined the car home one after another. In October of this year, Yang Song, the former deputy general manager of Ford brand passenger car division of Ford China, joined Autohome as the company’s vice president and general manager of the main engine plant division, taking full charge of the company’s main engine plant business. In November, Wu Jiang, the former general manager of OPPO Internet service system video business, joined the company and served as senior vice president. By then, Wu Jiang will be fully responsible for the C-side business of Autohome.

See also  New energy vehicles set off a wave of price increases: nearly 40 models announced a price increase of over 30,000 within a month - IT and Transportation

The U.S. FDA claims that the home rapid test kit is more inaccurate or false negative for Omi Keron

Made in Italy, food and pharma push exports....

Electricity bills are crashing under high temperature, some...

The engine of the economy? It is found...

Ares, the strategic plan, the products, the investors...