ByteDance canceled size Zhou netizens quarreled: the money is less, the workload is not reduced-ByteDance ByteDance

Following the trial of Tencent’s first studio to force off work at 6 o’clock and the quick hands to cancel the big and small weeks, the byte also officially notified by email: cancel the big and small weeks! On July 9th, according to The Paper, ByteDance announced internally that it would cancel major and minor weeks from August 1st. Teams and individuals in need from August can submit overtime applications through the system. In this regard, the official response of ByteDance: it is true.

#Bytebeat’s Cancellation Week# also quickly rushed to the hot search on Weibo. Unexpectedly, this adjustment did not seem to be welcomed by netizens. Someone pointed out straightforwardly: the work is going on, but the salary is lowered. 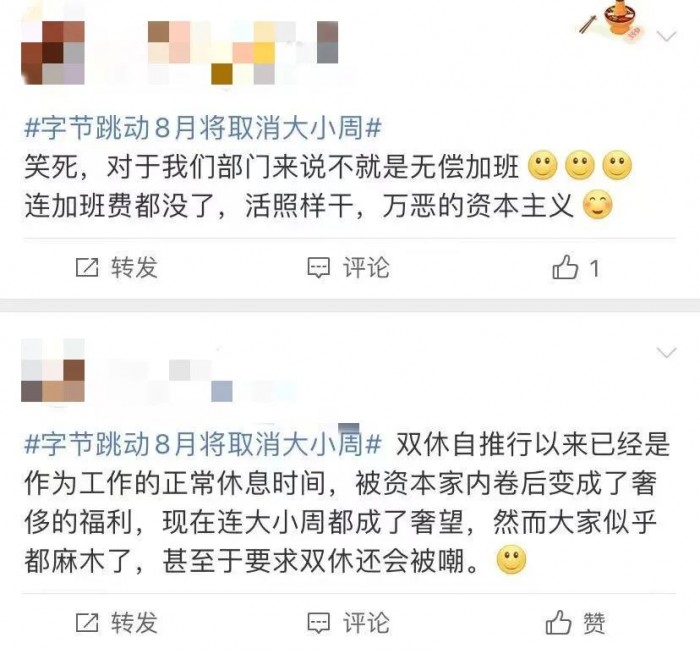 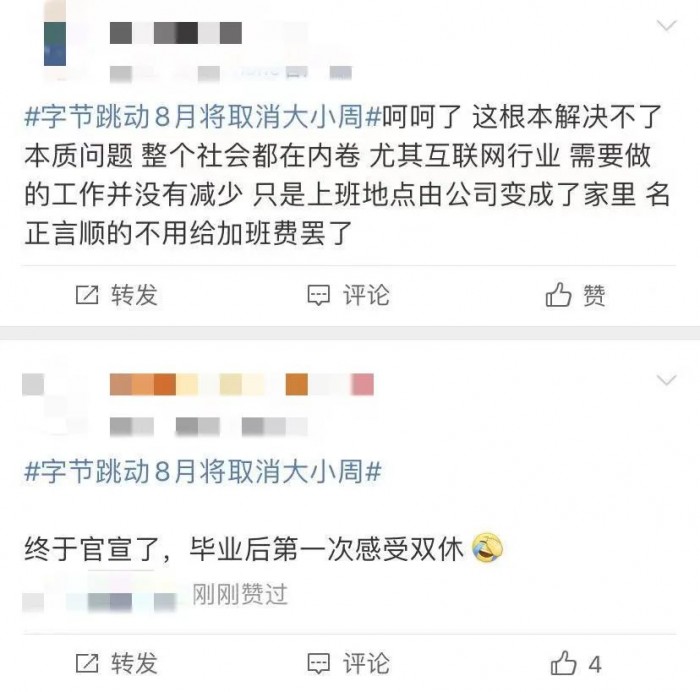 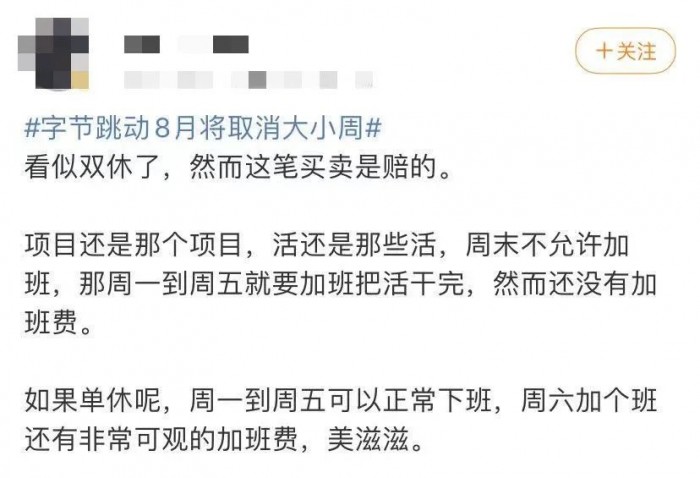 Prior to this, Bytedance had conducted investigations on whether to cancel the size of the week. The survey results show that one-third of employees do not support cancellation.

The Internet is no longer 996?

Kuaishou also announced the cancellation of major and minor weeks after the trial of Tencent Photonics Studio got off work on time at 6 o’clock.

On June 24, according to 36Kr, Kuaishou announced the cancellation of major and minor weeks from July 1. Employees work overtime as needed, and the company pays employees overtime wages in accordance with relevant regulations.

Kuaishou said in an internal email, “Customer obsession is the fundamental starting point for all our work. In the process of creating value for customers, in the team battle of major projects, we support working overtime on demand to promote business growth. We expect I hope to use a comprehensive way to improve the efficiency of the company’s business development and organizational growth. We also sincerely hope that every Kuaishou person can truly work quickly and live happily.”

On December 29 last year, Kuaishou held an all-staff meeting. Liu Feng, the company’s human resource leader, announced that Kuaishou will start on January 10, 2021, and all employees will start working in small and small weeks. He said that Sunday is the beginning of the week in the West, and many teams hold regular meetings on Monday. On Sunday, employees begin to spontaneously prepare the content that needs to be used in weekly reports and regular meetings. At the same time, he also revealed that 70% of the company’s staff are currently implementing large and small weeks, and for this reason, they have decided to start large and small weeks in an all-round way.

The sweat of the youth of Dachang has made the company’s dazzling performance.

On June 17, an internal material by Bytedance showed that Bytedance’s 2020 revenue reached 236.6 billion yuan, an increase of 111% year-on-year; gross profit increased by 93% to 133 billion yuan.

In terms of revenue scale, compared with Ali’s 717.3 billion yuan, Tencent’s 482.1 billion yuan, and Kuaishou’s 58.8 billion yuan last year, Bytedance’s annual revenue is 1/3 of Ali’s, half of Tencent’s, and 4 times that of Kuaishou.

See also  Inflation alarm, the CGIA asks the government to intervene on the tax burden

Equity incentives are the magic weapon for Internet companies to attract talents, and as the talent team grows, the price the company pays for this will also increase. But on the other hand, with the development of the company, the employees of Bytedance have benefited a lot.

In addition, ByteDance also released monthly active data. As of the end of 2020, the number of monthly active users of ByteDance’s products reached 1.9 billion worldwide, covering more than 150 countries and regions around the world.

ByteDance has repeatedly been reported to be listed on the news

ByteDance has not yet been listed, but Zhang Yiming stepped down as CEO ahead of time. Prior to this, ByteDance had repeatedly reported plans to go public.

On February 5 this year, Kuaishou was listed in Hong Kong, and the company’s market value has soared since then, which aroused public attention. As the opponent of Kuaishou, news about the listing of ByteDance began to appear since then.

On April 23 this year, ByteDance officially issued a statement stating that there has been a lot of news about the company’s listing recently. After careful research, it is believed that the company does not have the conditions for listing and currently has no plans to go public. Since then, rumors about the proposed listing of ByteDance have also ceased for some time.

In March of this year, Zhou Shouzi, president of Xiaomi’s international department, announced his resignation from Xiaomi and joined ByteDance as CFO. This is also seen by the industry as one of ByteDance’s plans to go public.

See also  After 32 years, Crayon Xiaoxin's home was finally able to pay off the mortgage in August this year - Japanese and Korean comics - cnBeta.COM

ByteDance said in an internal letter, “The recipient has been working in technology and finance in the past. He previously served as CFO and President of the International Department at Xiaomi. Before joining Xiaomi, he worked as a technology investment in financial institutions such as DST and Goldman Sachs. The recipient is very familiar with our business, team and culture. He has known us during his work at DST and promoted DST to invest in Bytedance at a very early stage.”

Prior to this, Zhu Wenjia, who made his first public appearance as CEO of today’s headline, revealed that with regard to the issue of listing, Zhang Yiming, the founder of ByteDance, believes that it is necessary to delay satisfaction and wait. The so-called delayed gratification actually refers to a choice orientation that is willing to give up immediate gratification for more valuable long-term results.

ByteDance ByteDanceByteDance cancels the size of the weekcnBetanetizens quarrel: the money is lessthe workload is not reduced
0 comment 0 FacebookTwitterEmail
previous post

Be careful because having dinner at this time raises the risk of diabetes, stroke and heart attack

The Truss fa mea culpa: we should have...

Haval’s beast PHEV will be launched within this...

Musk pushes humanoid robot: the price may be...

The China Banking and Insurance Regulatory Commission and...