On the 15th, the official announced the launch of a self-developed non-performing asset promotion and marketing platform-“China Huarong Rongyitao”. On the 16th, it was approved to issue financial bonds not exceeding RMB 70 billion (inclusive). On the 17th, the non-public issuance of domestic shares and H shares introduced strategic and financial investors’ issuance plans, and the raised funds did not exceed 42 billion yuan.

At the same time, China Huarong initiated the establishment of the equity transfer project of Huarong Xiangjiang Bank and Huarong Financial Leasing, and publicly transferred all the Huarong Securities Co., Ltd. (hereinafter referred to as “Huarong Securities”) held by the Beijing Financial Assets Exchange. 71.99% equity. This is another major “slimming” move by China Huarong after the transfer of Huarong Trading Center, Huarong Consumer Finance Equity, and the reorganization of Huarong Trust Equity.

China Huarong said that the capital increase by the introduction of war is a landmark achievement of China Huarong’s risk management, continuous operation, and reform and development. The sale of equity in financial subsidiaries including Huarong Securities will play a positive role in supplementing the company’s core Tier 1 capital, focusing resources on the main business of non-performing assets, and consolidating the core competitiveness of the main business.

Introduced a capital increase of 42 billion yuan, with an issuance premium of more than 20%

On November 17, China Huarong issued an announcement on the Hong Kong Stock Exchange stating that according to China Huarong’s 13th Board of Directors’ review and approval of the “Proposal on the Non-public Issuance of Domestic Shares and H Shares by China Huarong Asset Management Co., Ltd.”, China Huarong Huarong intends to issue 39.216 billion domestic shares and 1.961 billion H shares. The total size of the issuance is 41.177 billion shares, and the funds raised will not exceed 42 billion yuan. 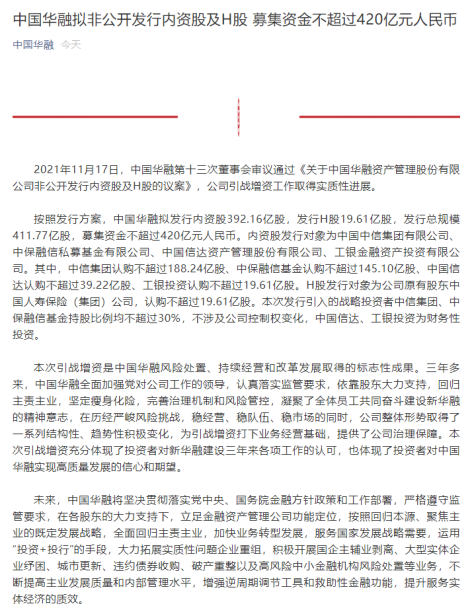 Compared with the previous announcement on August 19, the strategic investors introduced in this issuance have increased ICBC Financial Assets Investment Co., Ltd. compared with the previous announcement, without Sino-Ocean Capital Holdings. In addition, the shareholding ratio of CITIC Group and China Insurance Rongxin Fund does not exceed 30%, which does not involve changes in corporate control; China Cinda and ICBC Investment are financial investments. After the issuance is completed, the Ministry of Finance will remain the largest shareholder of China Huarong, holding approximately 27.76%; CITIC Group is the second largest shareholder, holding approximately 23.46%; and China Insurance Rongxin Fund is the third largest shareholder. Holds approximately 18.08%.

It is worth noting that the issuance price is RMB 1.02 per share, a premium of more than 20% compared to the stock price before the suspension. From the point of view of net assets per share, as of the end of 2020, the net assets per share of the company after the additional issuance will be RMB 0.46. Increased to 0.75 yuan, an increase of more than 60%, safeguarding the rights and interests of investors.

After this issuance, China Huarong’s public shareholding accounted for 18.23%, which temporarily does not meet the 25% minimum public shareholding requirement of the Hong Kong Listing Rules. China Huarong stated that it has applied to the Stock Exchange for a temporary exemption from public float. At the same time, according to the negotiation between the company and some investors in this issuance, some investors who subscribe for domestic shares intend to participate in the full circulation and convert their domestic shares into H shares of the company. After the completion of full circulation, it is expected that the company’s public shareholding will be restored to at least 25% of the company’s issued shares at that time.

Just one day before the announcement of the capital increase plan, on November 16, the China Banking and Insurance Regulatory Commission issued an announcement, approving China Huarong Asset Management Co., Ltd. to issue financial bonds with an amount not exceeding 70 billion yuan (inclusive). Mainly used for the main business such as the acquisition and disposal of non-performing assets and debt-to-equity swaps.

See also  Rebound on the stock market, driven by Saipem and Banco Bpm

This is also the largest single financial bond issued by the four major non-performing asset disposal companies (AMC) during the year, and it also shows the regulatory support for Xinhuarong. Previously, it was relatively rare for the four major AMCs to issue financial bonds in the national inter-bank bond market.In 2019, the China Banking and Insurance Regulatory Commission respectively approved the issuance of 30 billion financial bonds by Great Wall Assets and Orient Assets for operating their main businesses. This year, Cinda and Great Wall Assets issued US dollar bonds. From the point of view of the amount of money, it is far less than that of Huarong.

On the 15th, China Huarong officially announced the launch of a self-developed non-performing asset promotion and marketing platform-“China Huarong·Rongyitao”, to further explore new models of online promotion, marketing and services, and to accurately connect low-efficiency and distressed assets. Revitalization and reorganization can effectively meet the special financial needs of the real economy. 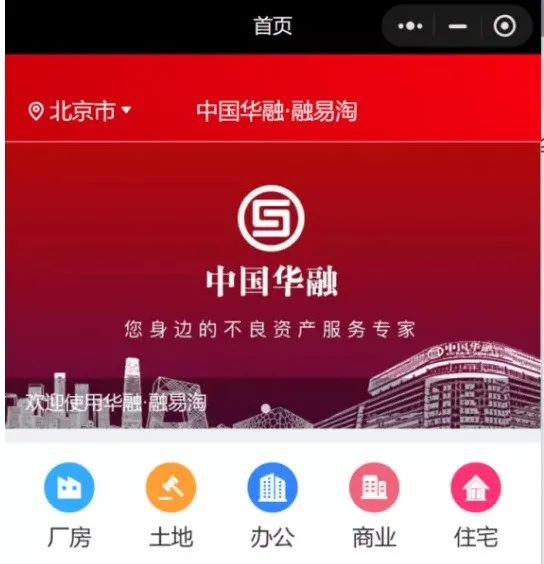 “Rongyitao” integrates and displays various types of information such as basic information of creditor’s rights, property rights, guarantee methods, asset scenes, etc. in the presentation of asset information. At the same time, it sets “asset amount” and “location area” according to user search habits. Multi-category labels such as “industry”, “asset type”, and “litigation status”. For example, under the asset type label, it covers detailed labels such as equipment category, resource asset category, accounts receivable category, financial pledge category, etc., which is convenient for users to search.

At present, the platform has listed more than 7,000 assets, covering 33 provinces, autonomous regions, municipalities directly under the Central Government, and Hong Kong and Macau Special Administrative Regions across the country. It involves real estate, manufacturing, energy, financial and other industries, attracting people from all over the country. Attention and inquiries from many investment institutions.

Speed ​​up the liquidation of non-main business financial services

China Huarong stated that in accordance with regulatory requirements for financial asset management companies to gradually withdraw from non-primary businesses, the company plans to initiate the establishment of equity transfer projects for Huarong Xiangjiang Bank and Huarong Financial Leasing. The equity transfer will be made publicly. China Huarong intends to hold 40.53% of Huarong Xiangjiang Bank’s equity, a total of 3.141 billion shares, and Huarong Financial Leasing’s 79.92% equity, with a total of 4.737 billion shares to be sold out.

Prior to this, on June 29, China Huarong announced its intention to sell 79.6% of Huarong Exchange Center; on August 2, it announced its intention to transfer 70% of Huarong Consumer Finance and implement equity restructuring of Huarong Trust; One month later, it issued an announcement to publicly transfer 71.99% of Huarong Securities. As of now, among the assets to be announced for sale, Huarong Trading Center has established the transferee as the banking credit asset registration and transfer center, and Huarong Consumer Finance and Huarong Securities have been listed and transferred on the Beijing Financial Assets Exchange.

Regarding the main business of non-performing assets, China Huarong stated that in accordance with the established development strategy of returning to the source and focusing on the main business, it will fully return to the main business, accelerate business transformation and development, and serve the needs of the country’s development strategy, using “investment + investment banking” means , Vigorously expand the restructuring of substantively problematic enterprises, and actively carry out businesses such as the divestiture of the main and auxiliary businesses of state-owned enterprises, the rescue of large-scale entities, urban renewal, the acquisition of defaulted bonds, bankruptcy reorganization, and risk disposal of high-risk small and medium-sized financial institutions.

See also  Superlega, the EU Court of Justice will have to rule on the role of FIFA and Uefa 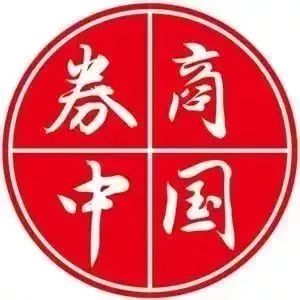 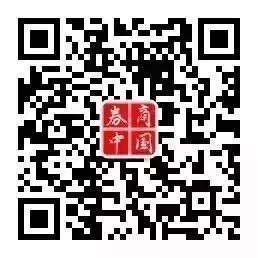 Opec + confirms an increase in production in...

The Central Bank and the Foreign Exchange Bureau...

Costa Toscana, a piece of Italy is ready...