Coking coal is supported and strengthened in the short term | Coking Coal_Sina Finance_Sina.com

Recently, although downstream coke enterprises and steel mills have been operating at a high level and supported by low inventoriescoking coalRigid demand, but the terminal demand that determines the price operation center of the black plate is still to be verified. It is recommended to pay attention to the negative feedback risk caused by less than expected demand. 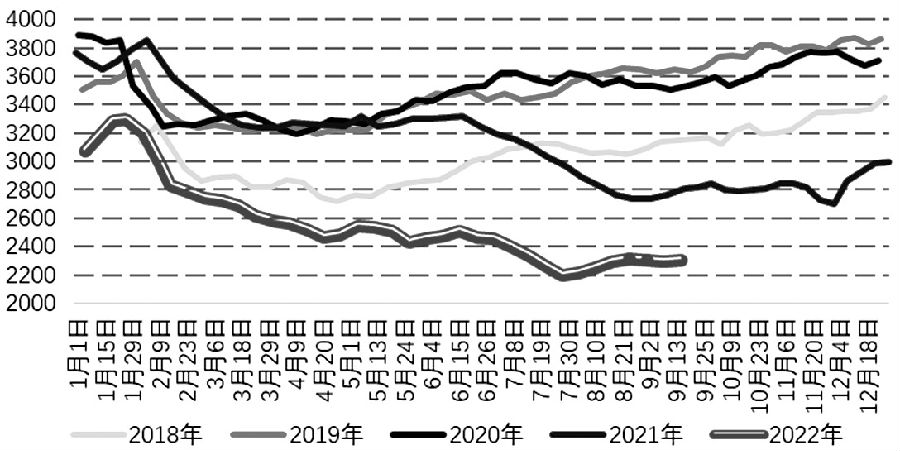 The picture shows the total inventory of coking coal

Since the second quarter, the negative feedback logic of the black industry chain has been activated, the terminal demand has weakened, the loss of the steel mill has forced the blast furnace to reduce production, and the real demand for the charge has declined. On the supply side, domestic coal mines have guaranteed supply and stable production, Mongolia and Russia’s exports to China have increased month-on-month, the fundamentals have weakened and macro sentiment has been pessimistic, and coking coal futures prices have fallen sharply from their highs. However, after the main coking coal contract completed the shift, the fundamentals lacked directional guidance, and the disk oscillated at a low level under the guidance of the expected game.

The steady release of domestic production

In 2022, the state will continue the idea of ​​ensuring energy supply, emphasizing that ensuring energy security and stable supply is the primary task, and focusing on enhancing domestic energy production guarantee capabilities. Therefore, since the beginning of the year, domestic coal production has increased steadily. Data show that from January to August, the country’s cumulative output of raw coal was 2.93 billion tons, an increase of 11% year-on-year. Among them, from January to July, the cumulative output of coking clean coal was 279 million tons, a year-on-year increase of 2.97%. In August, coal mines with abnormal underground production problems resumed production one after another, and high-frequency data feedback coal mines and coal washing plants operating rates continued to pick up. However, after entering September, coal mine safety inspections have been strengthened, and the market expects that domestic coal supply may decrease before mid-October.

According to statistics, from January to July, the cumulative import volume of coking coal was 32.183 million tons, a year-on-year increase of 23.5%. Among the top four importing countries (Russia, Mongolia, Canada, and the United States), Canada and the United States account for a relatively low proportion of imports due to factors such as long transportation distances. The main source countries of my country’s coking coal imports are still Russia and Mongolia. Russia has ramped up coal exports to China following a geopolitical conflict in March. Recently, due to transportation problems, the arrival of long-term resources in Russia has been delayed, and the downstream purchasing sentiment has improved. Port transactions have been active, and comprehensive quotations have been raised.

In terms of Mongolian coal imports, since September, the average daily number of vehicles cleared at Ganqimaodu port has reached 600. However, the proportion of Mongolian 5# raw coal in the recent customs clearance coal has been compressed by weathered coal, resulting in a decrease of 340,000 tons of port inventory from the previous high point. to 1.66 million tons. Therefore, in the short term, coal imports from Mongolia are subject to certain disturbances, with strong cost support and rising quotations. In the medium term, the current customs clearance level is close to the upper limit of the stage, and it is difficult for the new railway transportation mode to provide effective import increments in the short term. The author believes that under the condition that the epidemic prevention policy remains unchanged, it is difficult to have more room for improvement in the customs clearance level of Mongolian coal.

See also  "By the end of the year we will open the data centers in Milan to Google, in the cloud regions induced by 30-50 thousand people"

Terminal needs to be verified

In 2022, the rhythm of coking production capacity adjustment will become stable, the time window for supply and demand mismatch caused by production capacity adjustment will no longer be significant, and coke enterprises will have more flexibility to adjust the operating rate, makingcokeThe output is matched to the demand of the molten iron in the steel mill for the charge. Recently, steel mills have resumed production, the production of molten iron has rebounded from a low level, and the direct demand for coke has increased, which in turn has driven the output, that is, the demand for coking coal to strengthen. At present, the average daily output of coke has risen to a high level during the year. The average daily hot metal output of the 247 sample steel mills surveyed by Mysteel was 2.38 million tons, significantly higher than the 2021 average (2.2863 million tons).

From the perspective of inventory, as of September 16, the coking coal inventory of the full sample of independent coking enterprises surveyed by Mysteel was 1.2034 million tons, and the coking coal inventory of 247 sample steel mills was 8.1126 million tons, and the absolute level was at the lowest level in the past five years. . In addition, according to the analysis of seasonal laws, the fourth quarter is usually the replenishment cycle for downstream raw materials, with low inventories superimposed on high starts, and coking coal just needs support.

From a macro perspective, although consumption has stabilized, real estate has not performed well. On the consumer side, from January to August, the total retail sales of consumer goods increased by 0.5% year-on-year (the first positive return since April); on the real estate side, from January to August, the cumulative sales of commercial housing decreased by 27.9% year-on-year, and the area of ​​new housing construction decreased year-on-year. 37.2%. Although the policy is to hedge the risk of real estate pressure, many departments have introduced special measures to promote the “guaranteed handover”, but considering that residents’ income and housing prices are expected to be difficult to improve in the short term, the market is still waiting to see the bottom-line effect of the policy.

See also  Energy price increases: the price of milk is likely to go over 2 euros per liter

Based on the above analysis, from the perspective of supply and demand, the release of domestic coal production will slow down in the near future, and the import of coking coal will also be affected to a certain extent. At the same time, the support of the downstream rigid demand still exists, and the fundamental improvement in stages has made the price of coking coal stronger, but the terminal demand that determines the price operation center of the black sector is still to be verified. (Author: Guoxin Futures)

Momo’s live broadcast of “Golden Song Peak Night” debuted in Nanjing, where the anchors and stars performed on the same stage-Qianlong.com.cn

Navigating China丨Serving National Rejuvenation and Promoting Human Progress——Since the 18th National Congress of the Communist Party of China, major country diplomacy with Chinese characteristics has been carried out in an all-round way

Powell’s latest talk: I don’t know that the...

New stadium of Rome, with the resolution on...

AI chatbots are in the ascendant, Google, Microsoft,...

Regional elections polls prohibited, but the rumors between...

Covid is no longer scary: the accounts of...

Opinions on the Bill, Read the Top Review