This is another celebrity grievance in 2021.One of the parties is a well-known directorHuang Dong Hyuk(Hwang Dong-hyuk), directed works including “The Forge” and the recent popular “Squid Game”; and the other isLeBron James(Lebron James), he is one of the best basketball players of all time and is currently the star player of the defending NBA champion Los Angeles Lakers.

The focus of the contradiction between the two sides is the ending of “Squid Game”. Earlier this month, James was filmed chatting with teammate Anthony Davis about “Game of Squid”, especially discussing the ending of the show. James made it clear that he did not like this ending. James laughed and said: “The male protagonist Cheng Qixun (played by Lee Jung Jae) should get on the plane to see his daughter.” In the ending of the play, instead of getting on the plane and flying to the United States to see his daughter, he left the airport at the last minute to try to track down the people behind the squid game.

In an interview with the “Guardian” on Tuesday, when asked how he viewed James’s opinion of a bad ending, Huang Dong-hyuk responded. Huang Donghe fought back:

Have you seen “Slam Dunk 2: A New Legend”? LeBron James is very cool and can express what he wants to express. I respect this. I am very grateful to him for watching the entire series. But I will not change my ending. This is how I ended up.

If he has his own ending that can satisfy him, maybe he can make his own sequel. I will check it out and maybe send him a message saying, “I like your whole show except for the ending.” 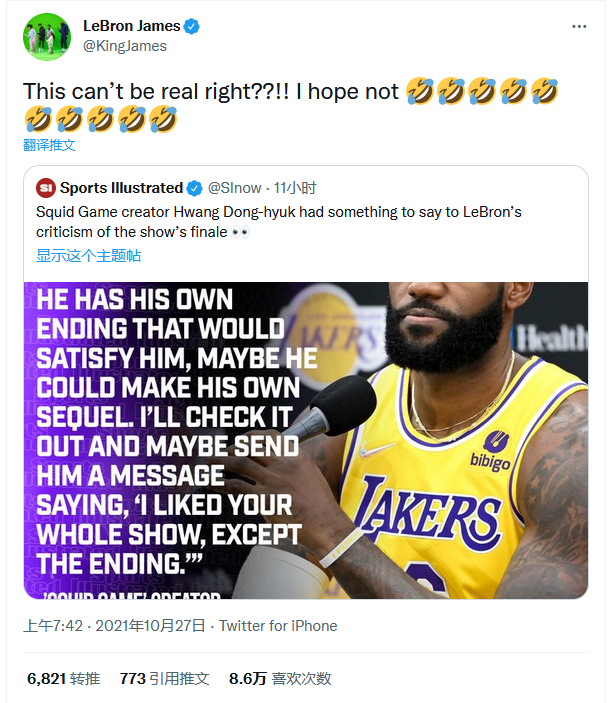 After the nuclear submarine “stabbing” incident, the presidents of the United States and France will meet face-to-face for the first time in this place… | Daily Economic News