Il anti-spread bazooka saves BTP saves euro from the ECB Has it arrived, is it coming, will it arrive or not? The ECB responded today, at the end of the emergency meeting which it has decided to hold precisely to comment on the sharp sell-offs that made the rates of BTPs and other euro area government bonds soar to historic levels.

Sell ​​offs that were triggered by the failure to announce, during last week’s ECB-Day, of an anti-euro fragmentation tool. The markets had bet on the arrival of a new bazooka, maybe even ready-made.

This was not the case: Christine Lagarde’s ECB announced a rate hike of 25 basis points at its next meeting on 21 July; a probably more aggressive rate hike at the September meeting; and any other monetary tightening even after the month of September. From the series: a kind of #WhateverItTakes to fight inflation, which in the euro area travels at an annual rate of more than + 8%. But not really a #WhateverItTakes in stile Draghi, that it can save the BTPs and sovereign debt armored to date from speculation by the various bazookas of the ECB.

Was the Corriere della Sera to be the first to report the indiscretions on the emergency meeting of the ECB called for today.

Lagarde thus welcomed the SOS launched by the markets, where in recent sessions the rates on ten-year BTPs have shot up to over 4%, a record since 2013 e lo spread BTP-Bund flew to what has long been considered the danger threshold, (intended as a threshold that would lead the ECB to intervene with a bazooka) -.

The tension has also been confirmed to be too high in the primary market, as demonstrated by lyesterday’s BTP auction, which saw the 3-year bond assigned a yield of 3.04%, the highest level since July 2012 and doubled compared to the 1.5% of the last placement; the 7-year BTPs instead recorded a yield at an all-time high of 3.75% and the two 30-year BTPs allocated yields of 4.23% and 4.2% respectively.

With today’s meeting, it cannot be said that the ECB has not intervened.

However, the anti-spread bazooka, from what emerged from the official statement of the ECB, has yet to be created.

Therefore, the doubts of the markets were well founded: it is not yet ready and therefore a bazooka is not yet available that the ECB can unleash immediately to stem the sell off on BTP & Co.

The statement states that the ECB “will make use of flexibility in the reinvestments of maturing securities purchased with pandemic QE, or PEPP “, and, also, that “The Governing Council has decided to mandate the Eurosystem committees and internal services (of the ECB) to speed up preparations to complete the plan for a new anti-fragmentation instrument, to be submitted for consideration by the Governing Council “ same.

It must be said that the international press, after the stalemate of the ECB last Thursday, has repeatedly recalled the problem of Italy and the risk that, without the assistance of the ECB, BTPs could end up in the crosshairs again. of speculation. 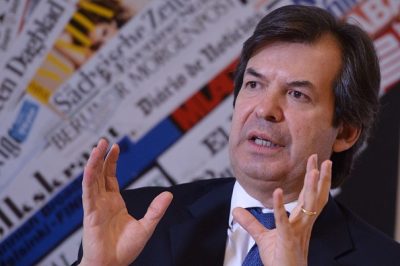 “We in Italy do not have a problem of sustainability of the public debt – however, he reassured today Carlo Messina, number one of Intesa SanPaolo – This must be a clear message. The issue is whether we want to be free and independent. That we are talking only about energy and food independence and not also about financial independence seems to me an idiocy “.

Messina spoke at the conference Young Factor, organized in Milan by the Permanent Youth-Editors Observatory.

“Italy is strong – underlined the CEO of Intesa – has the strength and the structural conditions to do things independently e it has to do things independently without being attached to the Frankfurt filler pipe, especially considering that it is a country that has ten trillion in savings. Plans are needed to accelerate growth, but reduce dependence on the ECB. Let’s start with what we have in our country, always in the logic of having sustainability and independence, but the public debt I have no doubts is sustainable “.

However, Carlo Messina has launched an appeal so that speculation is born, noting that the fundamentals of Italy “They are solid as a rock” and also highlighting the ideal value of the spread BTP-Bund, according to Intesa SanPaolo:

“There is no need to panic. The spread should be 100-150 basis points, not what we see today “Messina added.

The words uttered by the former central banker, on the board of the ECB until 2011, also resonate in this context Lorenzo Bini Smaghi, during an interview with La Repubblica:

“The spread (BTP-Bund) is not out of control, it is well below 2011. Of course, in Portugal it is half the rating even though the rating is similar to ours: there is a more prudent management of finance and less political instability ”. It’s still: “We cannot continue to rely on the ECB: we must work on Italian politics, stop asking for budget variances and give bonuses to rain just to gain approval “.

So in the meantime Michele Morra, Portfolio Manager of Moneyfarm, commented on the outcome of the emergency meeting of the ECB:

“The extraordinary meeting today, ffocused on the risk of economic and financial fragmentation of the Eurozone, it partially disappointed the markets, already discouraged by the vagueness of last week’s meeting. However, in the absence of substantial indications on the new instrument the Central Bank is working on, the single currency has completely lost the gains of the morning. The positive note is that it could be there an additional tool in addition to the reinvestment of the PEPP, which was not deemed sufficient to moderate the rise in spreads. In this sense, the capacity of additional instruments to mitigate the effect of the rate hike on the financial stability of peripheral Europe also remains to be demonstrated.“.

However, we believe – Morra continued – that the flexibility to which the ECB aspires is a fundamental aspect for the bond yields of peripheral Europe, not only thanks to the direct containment of the spreads deriving from the purchase of securities, but also due to the commitment of the Central Bank itself to intervene in stressful situations. That said, concentrate your investments in some countries by systematically focusing on the protection of the Central Bank represents a gamble and we therefore believe it is important to continue to diversify the bond component of the portfolio ”.

Market reaction after ECB announcement, watch out for BTP rates and spreads

Regarding the reaction of the markets, the index of Piazza Affari Ftse Mib first slowed the pace after the publication, by the ECB, of the outcome of today’s emergency meeting: from a 3% rally, the index recorded a rise of 2, 5%. Subsequently, the Ftse Mib returned to rise by 3%.

See also  IPhone 14 squeezes toothpaste crazily, in the final analysis because Apple has no real rivals

After the announcement of the ECB, BTPs also reduced their earnings with ten-year rates thus rising from a low of 3.75% just before 2pm to 3.95% after the ECB.

But the buys remained, with yields swinging back to around 3.8%.

Even the flare-up of the BTP-Bund spread, after the ECB news, has weakened, with the differential rising from a minimum of 213 basis points to 221. But the spread then fell back to 215 basis points: the message digested by the markets, at least in today’s session, is that the ECB has nevertheless committed itself to creating a new anti-spread bazooka. And this is the most important thing. At least for the markets. For Italy’s independence from the ECB a little (much) less.

If you want updates on ECB: new bazooka saves BTP anti-spread will be there. Messina (Intesa): but Italy reduces dependence enter your email in the box below:

In 7 years, China has reduced air pollution as much as the US in 30 years