Second consecutive day of buy boom on the Hong Kong stock exchange, driven by a wave of purchases on the stocks of the Chinese hi-tech giants. A wave that also saw the funds led by Cathie Wood, number one of Ark Investment Management, return as protagonists.

According to what reported by Bloomberg, the American giant has bought up, in particular, of adr at JD.com, after the group announced it closed the second quarter on a better-than-expected balance sheet.

Wood’s buyouts in China are thus back in the limelight, after the investment company focused on the hi-tech sector had reduced its holdings in theChinese equity.

The Hang Seng, the benchmark index of the Hong Kong stock exchange, ended today’s session up 2.46%, supported by the trend of the stocks that make up the sub-index. Hang Seng Tech Index, flown by more than + 7% after + 2% on the eve.

The heavyweights of the sub-index, Tencent e Alibaba Group, they rallied respectively equal to + 8.8% and + 9.5%.

Tencent, the giant that among the various assets also counts the WeChat messaging servicealso benefited from the announcement of a share buyback.

Making JD.com, the e-commerce group announced that it closed the quarter ended in June with a turnover jumped by 26%; the leaders also said that they do not foresee a strong impact from the new cuts on the use and collection of data, established by Beijing with a privacy law particularly severe.

As a result, JD.com quotes closed the trading day splashing 15% and thus cashing in the strongest daily income ever.

Tencent’s boom was also its strongest since July 29, following its 230,000 share buyback on Monday.

Also keep an eye on Alibaba, which the day before yesterday saw the stock slide to record minimo on the Hong Kong Stock Exchange.

The quotations of the giant of food delivery Meituan they flew 14%, while live-streaming platform Kuaishou Technology saw the stock jump 15%, to a record since last February.

Of course, the titles of the Chinese titans still hang over the sword of Damocles of the controls and threats of sanctions by the Chinese market regulators which, in recent months, have given a hard time, in general, to groups listed both in Hong Kong and on Wall Street.

What about the attack on the ride-sharing giant Didi, also known as Chinese Uber, which ended up in Beijing’s crosshairs almost coinciding with its landing on the New York stock exchange, repeatedly attacked in the days following the launch of the IPO, at taken with inspections in his offices and threats of all kinds?

Heavy attacks were also launched against Tencent and Chinese companies
active in the private school sector. 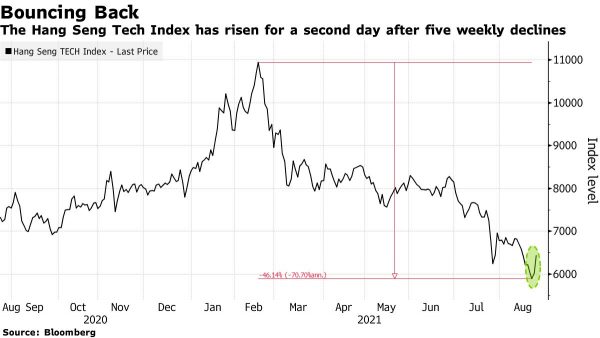 MSCI, the world’s number one provider of stock market indexes, tried to stop the nervousness that hit the Hong Kong stock exchange and the doubts about the “investability” of Chinese shares, recalling what happened previously, when the stock had rebounded. following heavy disposals.

Compliance with the rules of the authorities, recalled the president and CEO of MSCI Inc Henry Fernandez in an interview with Bloomberg Television, weighed on Chinese equities “every three, four, five years, and obviously in those moments the markets are been impressed with the sales. But then, very quickly, they have recovered ground, aiming for new highs“.

What happened in Hong Kong was also commented by Gabriela Santos, global market strategist of the asset management division of JPMorgan Chase:

“We have seen the same thing in 2018, 2015 and 2011, and the phenomena were each time disconnected from the economic cycle, connected rather to China’s reform and regulatory campaigns – said Santos, also interviewed by Bloomberg – It takes time to rebuild trust, but after three months, Chinese equities are tending to rise ”.

The continuous disposals that hit the Hong Kong stock exchange led the Hang Seng benchmark index to capitulate last week in the bear market phase. The list has plummeted to more than -20% compared to the record tested in mid-February.

If you want updates on Cathie Wood, Hong Kong enter your email in the box below:

We have received your registration request. If this is your first time signing up for our services, confirm your subscription by clicking on the link received by e-mail.

The Central Bank: Has helped Beijing to release...

The Shanghai and Shenzhen stock indexes are mixed,...

Mps-UniCredit at the end of the line: negotiations...