On the first day of National Day Golden Week, Apple’s official offline retail store in Tianhuan Plaza, Guangzhou was overcrowded. People who came to experience the new iPhone 13 series lined up outside the store.“The waiting time for entering the store is about 15 to 20 minutes. The iPhone 13, iPhone 13 Pro, and iPhone 13 Pro Max are all out of stock, and the iPhone 13 mini is only in stock.” In Tianhuan Plaza, an Apple retail store staff responsible for the flow of people Introduce skillfully.

When the Times Weekly reporter expressed interest in the 256G iPhone 13mini, the staff quickly inquired about the system, and the feedback said it was “out of stock”. 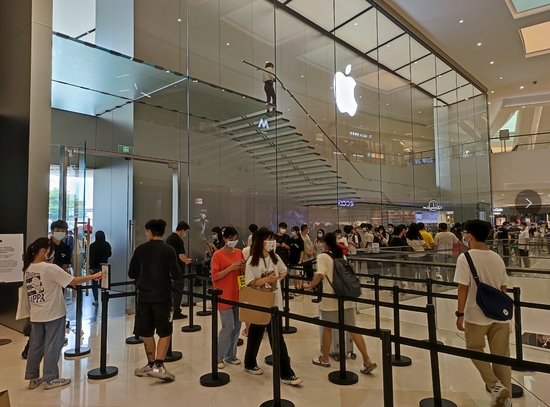 The day before, the topic “iPhone 13 hits Apple’s longest waiting period” rushed into the hot search on Weibo, and some netizens complained on the social platform. After more than 10 days of waiting, it has almost become a “stone of hope”.

“The delivery time for the new iPhone after the pre-order on Apple’s official website starts can represent the strength of demand.” Tianfeng Securities analyst Ming-Chi Guo pointed out in the research report that for investors, within two weeks, 2-5 weeks and 5- A delivery time of more than 6 weeks means that the demand is lower than expected, in line with expectations, and better than expected. According to the shipping time on Apple’s official website, the high-end styles are in line with expectations (about 3-5 weeks), and the low-end styles are lower than expected (within 0-2 weeks).

Recently, many industry experts told Times Weekly that the slow delivery of the iPhone 13 series is mainly due to the shortage of parts in the supply chain and the high enthusiasm for buying new machines on the sales side.

On September 30, a Times Weekly reporter learned from the internal staff of Zhengzhou Foxconn, the world’s largest iPhone OEM production base, that compared with the 10,000 yuan bonus recruitment on the eve of the iPhone 13’s release, the average daily 10,000 people entered the factory. The current recruitment plan for the factory has been Suspended, there will be a five-day holiday during the National Day.

“I have never been so idle before.” The employee said.

For consumers who buy the iPhone 13 series, the road to receiving goods is still long.

“How to put it, I feel like I bought a lonely one, every day I went to see if it was shipped, but it stuck there and it didn’t move.” On September 30, Da Xiong (a pseudonym) complained to the Times Weekly reporter.

On September 24, Big Bear purchased a blue iPhone13 Pro Max on the first sale day, showing that the expected delivery time is October 30th to November 6th. It is still “processing orders” and the delivery may be indefinitely.

At about 14:00 on October 1, a Times Weekly reporter saw in Apple’s offline store that they had to queue for about 15 minutes to enter the store. The display area of ​​hundreds of square meters in the store was crowded by consumers, especially the iPhone 13 series booth. The crowd was full of experience, and some people pulled the staff to introduce the configuration and delivery. 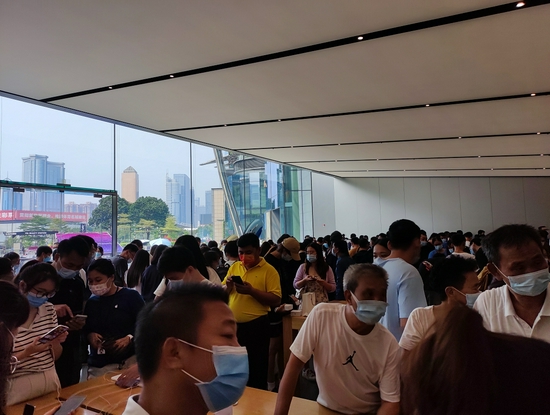 On the same day, a reporter from Times Weekly tried to order an Apple iPhone 13 and iPhone 13 Pro respectively from the official website. The delivery time is expected to be October 20-October 23 and November 6-November 13 respectively.

The popularity of iPhone 13 has been foreshadowed from the pre-sale. Under the cost-effective advantage of “increasing the volume without increasing the price”, all iPhone 13 series are pre-sold for about one minute, and Apple’s official website and major e-commerce platforms are all sold out.

According to information released by Suning.com, the iPhone 13 series was sold out almost instantly by users. As of 8:10 on September 24, the first batch of iPhone 13 series products have been sold out. Pink and Yuanfeng blue are the first to be sold. Sold out.

According to the WeChat official account of “Dada Group Blackboard News”, at 8 o’clock on September 24, the new iPhone 13 series was launched on the local instant retail platform JD Daojia under Dada Group. As of 18:00 on the first sales day, the sales of the iPhone 13 series on the JD Daojia platform increased by 470% year-on-year on the first sales day of the iPhone 12. The sales volume exceeded 800 units in one hour. 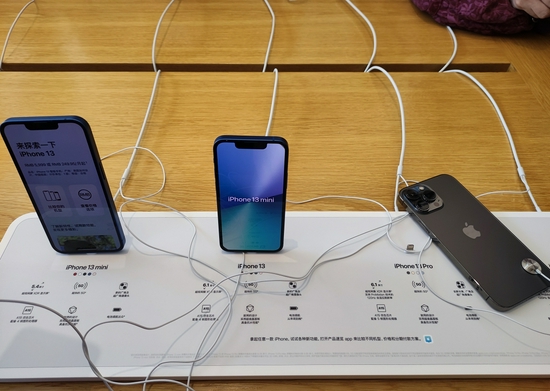 TrendForce, a global market research organization, predicts that the total annual iPhone production is about 230 million units, a year-on-year increase of 15.6%, of which new phones account for about 37%-39%.

On September 30, Zhang Yi, the founder and CEO of iiMedia Consulting, said in an interview with Times Weekly that with the arrival of National Day, Christmas, New Year’s Day and other holidays, consumer gift purchase demand is strong, and it is also a concentrated period for high-end machines to enter the market. iPhone 13 will drive the high-end market into an era of fierce competition.

“The reason why the iPhone has been waiting for a long time should be due to the global chip shortage. Although the supply chain management is as strong as Apple, there are also one or two small components that may be affected and delayed shipments.” September 30, Weibo The original video blogger said.

TrendForce Consulting also believes that the biggest challenge facing Apple is still the tight supply of some parts, but the estimated impact is limited.

A reporter from Times Weekly learned that the Foxconn production line responsible for OEM production has undergone subtle changes.

Currently, Zhengzhou Foxconn has undertaken nearly 80% of Foxconn’s smartphone production capacity in mainland China. On the eve of the iPhone 13 release, Foxconn’s Zhengzhou plant recruited on a large scale, with an average of 10,000 people entering the plant every day. In late August, it also offered a partner recommendation bonus of 12,700 yuan.

On September 30, an employee of Foxconn’s Zhengzhou factory told Times Weekly that the factory has temporarily suspended recruitment. Even more bizarre is that while the iPhone 13 ushered in the longest waiting period, the employee said: “I don’t know what went wrong. (Foxconn’s Zhengzhou plant) is not full. There is also a five-day National Day holiday. It’s never been before. So free.”

On October 1, a Times Weekly reporter saw on the Foxconn IDPBG Zhengzhou General Workers Recruitment WeChat official account that the latest recruitment information was released on September 14, with a referral bonus of up to 6,000 yuan, including a referral bonus of 500 yuan and a job seeker bonus of 4,900- 5500 yuan, which has shrunk by more than half compared to the peak period.

Prior to this, IDPBG Zhengzhou Business Group had adjusted the partner recommendation award three times in a row in the first half of September. According to the situation in previous years, with the continued production of new Apple products, Foxconn’s peak recruitment season is August-October, and the demand for employment will continue for a period of time.

“In previous years, we had to work overtime on National Day.” An employee of the Foxconn Zhengzhou plant told Times Weekly that the abnormal situation this year left him puzzled.

It was previously reported that the main reason for the shortage was that the supply of chips on the production line could not keep up with the pace of production. In the recent financial report meeting, Apple CEO Cook also proposed that the demand for chips exceeds the company’s expectations, which may have a huge impact on the company, and its sales may be reduced by 3 billion to 4 billion US dollars.

“IPhone 13 may have a potential downgrade risk in the fourth quarter of this year due to lack of materials. However, the extent of this downgrade will have a limited impact on iPhone 13 shipments.” Tianfeng Securities said in a research report.

Too embarrassing! The superstar declared bankruptcy and lost 1 billion net worth! _ Securities Times

Foxconn, the manufacturer of the iPhone Apple launches...

The call from Carlo Messina (Intesa SanPaolo) to...

Xiaohongshu responds to “filter attractions” complaints and will...