Home Business New energy vehicles set off a wave of price increases: nearly 40 models announced a price increase of over 30,000 within a month – IT and Transportation
Business

New energy vehicles set off a wave of price increases: nearly 40 models announced a price increase of over 30,000 within a month – IT and Transportation

Recently, China‘s new energy vehicles have been affected by the rise in raw material prices, which once set off a “price hike”. According to statistics, since March, nearly 20 brands and 40 models have increased their prices, ranging from 2,000 yuan to 30,000 yuan. Judging from the current price increases, Tesla and new domestic forces such as Xiaopeng, Ideal, and Leapmotor have seen the largest increases. For example, Leapmotor C11 increased by 13%-15%; Tesla’s model with the highest increase was Model Y, and the increase of each model remained around 8%.

The following table shows the specific price increases of new energy vehicles in 2022: 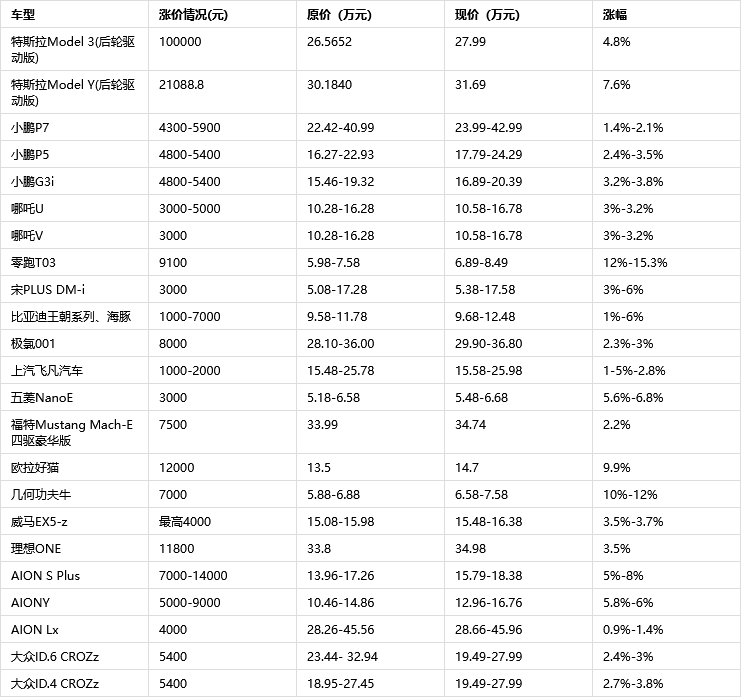 For the reasons for the price increase, most car companies have given a unified explanation – “upstream raw material prices”. The raw materials that increase in price are mainly concentrated in core components such as batteries and chips, especially the main raw materials of power batteries, such as lithium, cobalt, and nickel.

According to the survey results of China Association of Automobile Manufacturers, the price of raw materials for power batteries in China has risen sharply. The average price of battery-grade lithium carbonate has exceeded 500,000 yuan/ton from 53,000 yuan (RMB, the same below)/ton at the beginning of last year. .

Data show that at the beginning of this year, compared with the same period last year, the prices of some raw materials rose nearly 10 times. If a pure electric vehicle with a battery capacity of 70 kWh is calculated, the cost of battery raw materials alone will increase by about 10,000 yuan.

In response to this phenomenon, Cui Dongshu, secretary general of the China National Passenger Vehicle Market Information Association, said that since the beginning of this year, the price of power batteries has risen at a much faster rate than the industry expected due to rising raw material prices.

Previously, many car companies and battery suppliers had locked in a relatively low annual supply agreement price, and the pressure on car companies was not prominent. However, some battery companies changed the price negotiation rules this year, and prices were negotiated quarterly, and there were price openings.

Therefore, car companies that sign new orders after the price increase of power batteries are under great pressure, and they can only alleviate the cost pressure by increasing the price.

Sorting out the reasons for the price increase of raw materials, Chen Shihua, deputy secretary-general of the China Association of Automobile Manufacturers, commented that this phenomenon “deviates from the normal supply and demand relationship”.

Entrepreneurs in the industry have also suggested that the competent government departments should strengthen the macro-control of the bulk raw material market, moderately speed up the development of domestic resources such as lithium and nickel, and crack down on unfair competition that is hoarding and driving up prices.

See also  Musk is dissatisfied with the "wealthy tax", saying that the US government's asset allocation ability is much lower than that of commercial companies-People-Elon Musk

Otherwise, the price hike will intensify, which will affect the development of China‘s new energy vehicle industry in the long run.

For a long time, my country’s new energy vehicle industry has been policy-driven development, and has now formed a global comparative advantage, mainly in terms of market size, industrial system and technical level.

As a countermeasure, at this stage, some car companies have deployed lithium iron phosphate, hybrid and hydrogen energy to increase their ability to resist risks; some companies have chosen to intervene in the supply chain through self-developed and self-produced methods to solve battery supply and cost problems.

Zhang Xiang, an auto industry analyst, said, “For example, Tesla invested in lithium mines in Australia, Volkswagen invested in Guoxuan Hi-Tech, BYD has Fudi batteries, and car companies such as SAIC, Dongfeng, and Changan are rushing to set up joint ventures with CATL. “

This is because car companies increase their capital investment and increase their control over battery resources, so that they have a certain bargaining power, which is more conducive to increasing battery supply and further increasing their own production capacity.

000 within a monthcnBetaIT and transportationNew energy vehicles set off a wave of price increases: nearly 40 models announced a price increase of over 30
0 comment 0 FacebookTwitterEmail
previous post

Commemorating the 100th anniversary of Yuan Xuefen’s birth, repairing the former residence in Shengzhou, Zhejiang and paying tribute to the master of Yue Opera_Development_Xu Jianye_Reform

Ukraine: the redemption of Big tech