Today’s A-shares performed strongly,Shanghai IndexBack to 3500 points,Brokerage, Liquor, medicine, and technology stocks rose across the board, whileChina TelecomIt continued to lower the limit and was complained by investors as “telecommunications fraud.”

In the past two days, the A-shares have exulted and closed the Zhongyang line continuously.

Following yesterday’s rise in A shares, the Shanghai and Shenzhen stock markets opened higher today and oscillated higher in early trading. In the afternoon, the three major stock indexes maintained a high and volatile trend.

In terms of quantity and energy, today’s A-share turnover continues to remain above the trillion mark, with a total turnover of 1.4083 trillion yuan.

From the perspective of time-sharing capacity, compared with the usual trading volume concentrated in the first half hour of opening and then rapidly shrinking, today’s market still shows more active trading after the first half an hour of trading, showing a heavy upswing. The situation shows that off-market funds are chasing in regardless of cost. 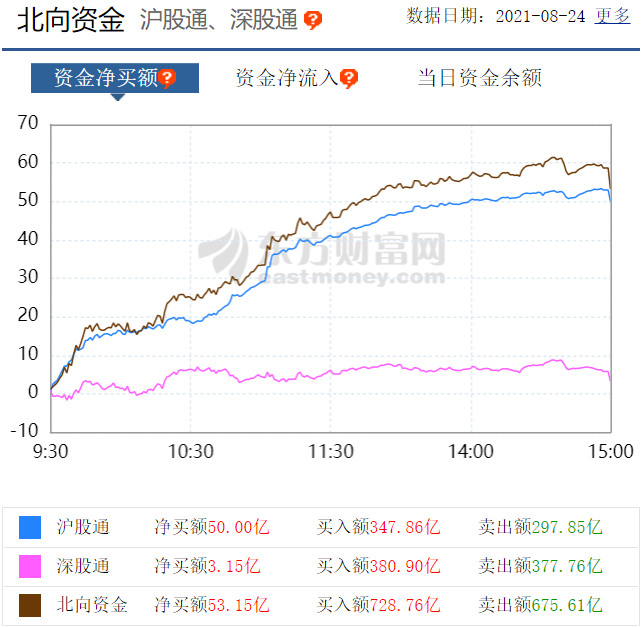 In terms of sectors, the liquor sector, which has been declining continuously recently, rebounded collectively today.Kweichow MoutaiIt rose by 3.5% to regain the 1,600 yuan mark. The wine sector index closed up nearly 3% throughout the day.Within the plateHuangtai Winery、ST Tongpu、*ST Chinese and PortugueseDaily limit,Chongqing Beer、Alcoholic WineThe increase was over 7%. 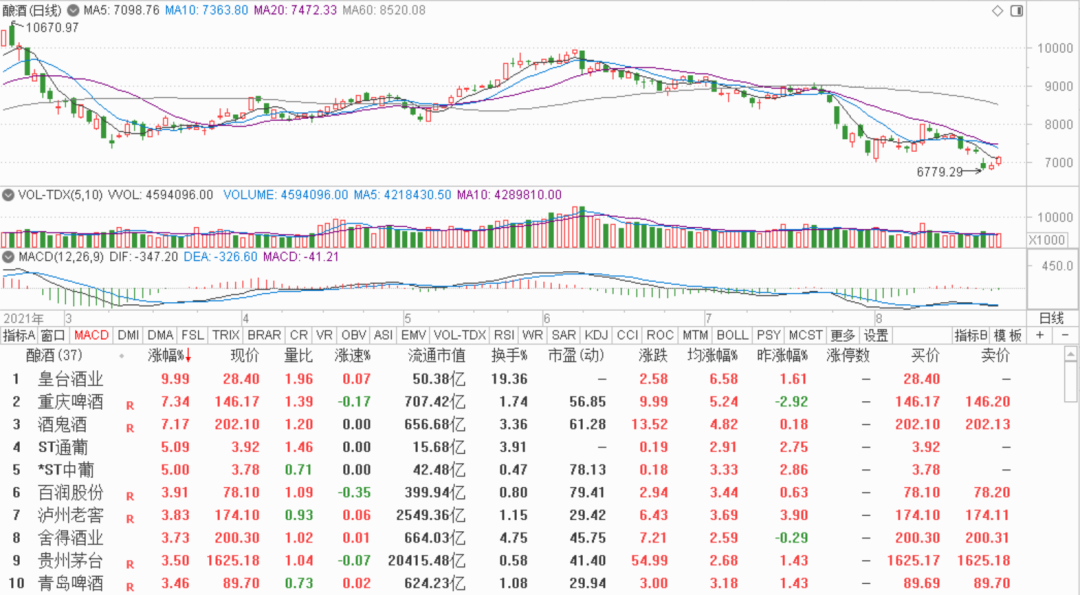 Since April of this yearOrient SecuritiesSince the start of the stock price, it has now doubled.

As for Hong Kong stocks, technology stocks rebounded sharply today. The Hang Seng Technology Index soared 7.06% throughout the day to close at 6446.18 points. Prior to this, the Hang Seng Technology Index experienced a “stock disaster” cut, falling from the February high of 11,000 points all the way to 5769 points. Although the index rebounded sharply today, it is still a drop in the bucket compared with the previous decline.

Compared with the closing price on the first day of listing, China Telecom’s market value has evaporated by 100 billion yuan in two days this week.3.03 million disclosed in the prospectusShareholdersCalculating the number of households, it is equivalent to an average daily loss of more than 18,000 yuan per household, and an average loss of 30,000 yuan on both days.

In this regard, some netizens joked: This is “telecommunications fraud.” 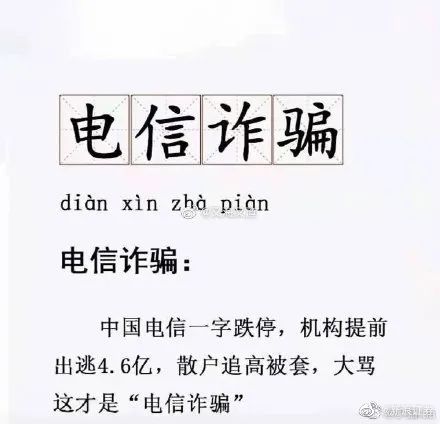 The central bank made a heavy voice, once again the RRR cut is expected to heat up

Regarding the continuous decline of A shares last week and the rebound of the two trading days this week, market participants believe that due to the slower-than-expected growth of economic data, A-share investors have profited, leading to a rapid fall in the stock market last week. However, the economic data was weaker than expected, and the market expected that the liquidity in the second half of the year would not be substantially tightened, and the funding would be better than expected.

On August 23, the peopleBankYi Gang, President and Director of the Office of the Financial Stability and Development Commission of the State Council, presided over the financial institutionCurrencyCreditSituation analysis symposium, to study the current monetary and credit situation, and plan the next step of monetary and credit work.

The meeting pointed out that it is necessary to continue to do a good job in the design of cross-cycle policies, increase credit support to the real economy, especially small, medium and micro enterprises, enhance the stability of the total credit growth, and maintainMoney supplyAnd the growth rate of social financing scale basically matches the nominal economic growth rate.

It is worth noting that according to past rules, financial institutions’ monetary and credit situation analysis symposiums are usually held in late November each year (for example, they were not held on November 15, 2018, November 19, 2019, or 2020). The symposium was advanced 3 months. Although the formulation of the relevant policies of the meeting has been expressed in the same way before, the meeting still attracted great attention from the market.

From the industry’s point of view, the symposium was held three months ahead of schedule, reflecting the high-level concerns about continued weak credit demand. The market generally believes that this symposium has extended the imaginative space for policies to a certain extent. As the next stage of economic development is facing greater pressure, the possibility of another RRR cut within this year is rising.

How does the organization look at the market outlook?

Regarding the sharp rebound in the market, how did the institutions take the pulse of the market outlook?

Northeast SecuritiesIt is believed that after the recent sharp correction of the liquor sector, the cost-effective configuration has become prominent. The second quarter is the traditional off-season for liquor, the sales task accounted for a relatively small amount throughout the year and the base effect is of limited reference. The impact of recent floods and epidemics on the liquor market is local. The current channel inventory is benign, and the long-term trend of consumption upgrade is determined. The current high-end Maowulu sales are progressing smoothly; the overall progress of the sub-high-end wine companies is in a benign state or even exceeded the target, the sub-high-end expansion (consumption upgrade + channel expansion) is still continuing, and the equity incentives of some wine companies are gradually implemented, and there will be differentiation in the later period. , But more growth. In the second half of the year, the sub-high-end is still optimistic about the superiority of the high-end.

Centaline SecuritiesIt is believed that the current valuation of the game sector is relatively low. At the same time, some companies in the sector are facing problems in the first half of the year, such as product launches and promotion delays, and rising purchase costs, plus the high price in the first half of 2020.PerformanceBase, leading to the first half of 2021Net profitGrowth is under pressure. At present, the game sector is at the dual bottom of valuation and performance growth. It is expected that since the third quarter, the game company will enter a new product cycle and accelerate the pace of going overseas. Valuation and performance are also expected to usher in a double restoration.

Cinda Securities StrategyAnalystFan Jituo said that the end of August to early September may be the time window for the end of the market adjustment. The performance of cyclical stocks has not yet been fully realized. Some investors are overly pessimistic about the economic downturn. The expectations are brought about by pessimistic expectations. The difference may constitute the second buying point for cyclical stocks, which is similar to mid-2010 and June 2017. In the past few months, the small-cap growth style has been continuously strengthened, and the performance of the leader Baima has been weak. Compared with 2019 and 2020, the style has undergone great changes.

According to historical experience, if it is a style shift in the bull market process, the longest will not exceed half a year. In the next one to two months, it is recommended that investors be more balanced in allocation. Among them, growth stocks still have performance, and it is recommended to focus on military industry; while the performance of cyclical stocks such as coal and nonferrous metals is not yet fully realized, which may be the direction with the largest difference in current expectations; opportunities for value stocks such as financial white horses may appear in the fourth quarter.

Supermassive black holes will also wander, and the number may be more than expected | TechNews Technology News

Bank of America: fourth quarter earnings up and...

China Merchants Bank and other 33 stocks were...

The historian Gabrielli of Venice enters the orbit...

Val Borbera rises on the ordinance against swine...

The balance of the two financing on the...