Ningde era’s super big order has lost 4 times, the big bull stock 20cm “one” word drops to the limit of 40,000 shareholders, weeping without tears!Buying convertible bonds is even worse and loses 99 yuan

September 16th,Huazi Technology(300490) opened the “one-character board” lower limit.As of today’s close,Huazi TechnologyIt was reported at RMB 26.19 per share, with a trading volume of 156 million throughout the day. There are still nearly 160,000 orders on the down limit, and 410 million of funds are waiting to “flee.”

Huazi TechnologyYesterday, it rose by nearly 14% in intraday trading, and the stock price was up to 37.30 yuan. Today, the stock’s “one-character board” has a lower limit, and investors who chase high have a maximum floating loss of 30% in 2 trading days.

What happened to Huazi Technology Company, the stock price fluctuated so much in 2 days?

Regarding the reason for the cancellation of the order, Huazi Technology explained in the announcement that the two orders need to be adjusted due to changes in the implementation of the relevant projects, changes in technical conditions, and the production schedule of Jingshi Electromechanical.

The announcement stated that Jingshi Electromechanical will continue to be a qualified supplier of CATL, and the two parties can continue to seek cooperation in light of project construction and delivery. 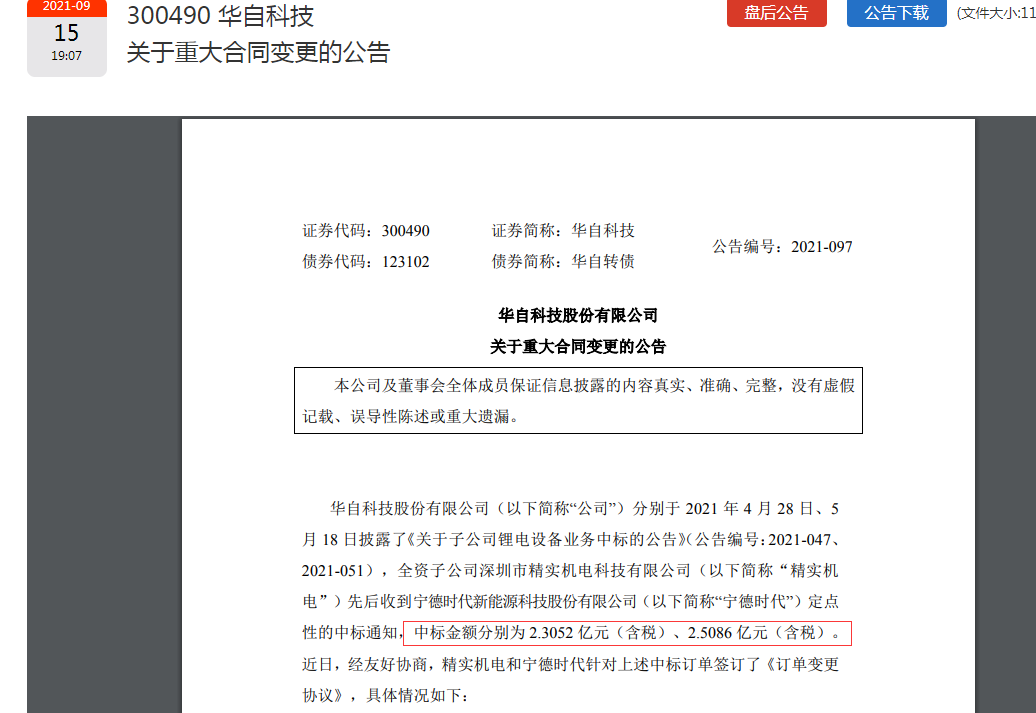 Also disclosed at the same time as the above announcementConvertible bondConversionReminder announcement, the conversion price is 9.25 yuan. 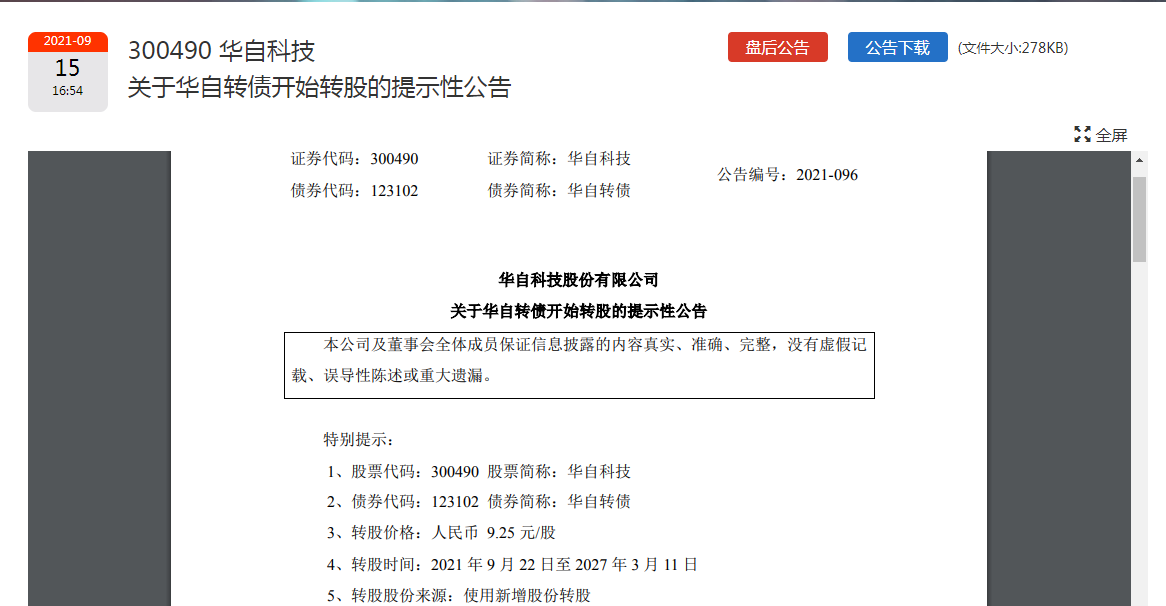 The Shenzhen Stock Exchange asked why the order was suddenly terminated 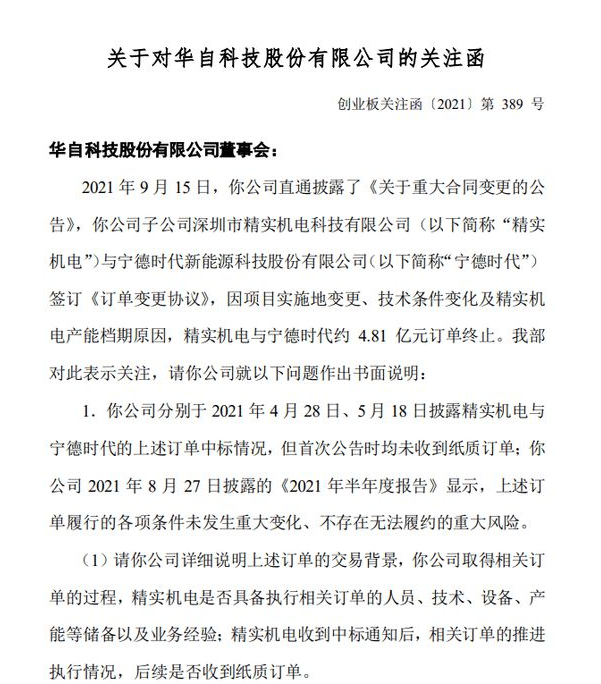 The attention letter shows that Huazi Technology disclosed the winning of the above-mentioned orders of Jingshi Electromechanical and Ningde Times on April 28 and May 18 respectively, but did not receive paper orders at the time of the first announcement; the company disclosed on August 27 According to the semi-annual report, the above-mentioned order fulfillment conditions have not undergone major changes, and there is no major risk of failure to fulfill the contract.

From disclosureMajor contract, The contract with an order of about 481 million yuan was suddenly cancelled, only 4 months later. Prior to this, Huazi Technology also announced that from December 2020 to February 2021, Jingshi Electromechanical has won the bid for approximately 530 million yuan and 499 million yuan of lithium battery production equipment projects for Ningde Times and its holding subsidiaries. Whether the company has enough capacity to complete the above orders is still in doubt.

On September 15, the stock price of Huazi Technology fell sharply after rising 13.44%, and finally closed. The company announced the cancellation of the contract that evening. Some investors also wondered whether the news of the order cancellation was leaked earlier than the announcement.The Shenzhen Stock Exchange also asked the company to explain the drafting and signing process of the “Order Change Agreement” in the letter of concern. The company and its directors, supervisors, and senior executives knew or should have known the specific timing of the termination of the order, and combined with the answers to the above-mentioned questions, The verification indicates whether the company’s contract progress information disclosure is timely, and whether the relevant information in the semi-annual report is accurate and complete.

See also  The People's Bank of China cuts the RRR will benefit the inflow of funds into the market.

On July 2, Huazi Technology announced that the controlling shareholder Huazi Group plans tobig dealOr the centralized bidding method reduces holdings by no more than 3,152,100 shares, accounting for 1.23% of the company’s total share capital.

As of July 27, 2021, the reduction plan of Miao Honglei and Tang Kai has been implemented; as of September 7, 2021, the number of shares held by Shareholders Integrity Venture Capital has reached half of the planned reduction. The controlling shareholder Huazi Group is more embarrassed. According to the announcement disclosed by Huazi Technology, from July 5 to July 26, Huazi Group reduced its holdings by a total of 2,350,700 shares in the form of block transactions and centralized bidding transactions in accordance with the previously disclosed shareholding reduction plan, accounting for 0.92 of the company’s total share capital. %. However, in the process of reducing shareholding in a centralized bidding transaction on July 26, the mistaken operation was “buy” and the mistaken buying of 26,000 shares of the company constituted a short-term transaction. Huazi Group had to announce the end of this share reduction plan ahead of schedule. . 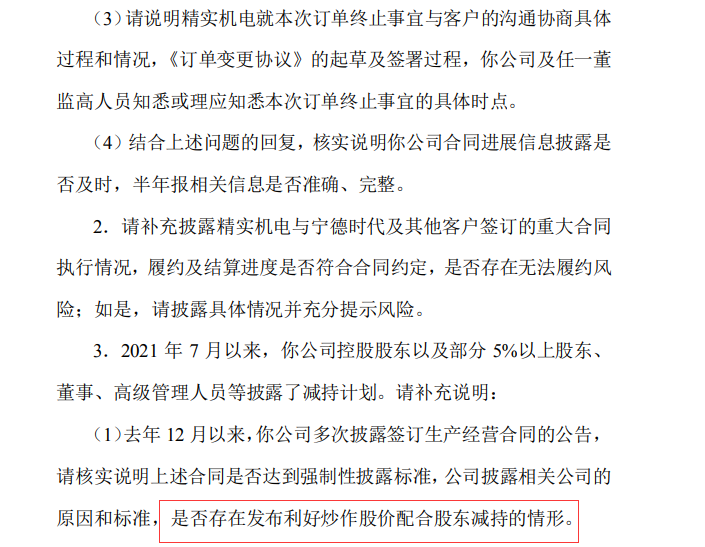 It is worth noting that since December last year, Huazi Technology has repeatedly disclosed the announcement of the signing of production and operation contracts.The Shenzhen Stock Exchange requires the company to verify whether the above-mentioned contract meets the mandatory disclosure standards, “the company’s reasons and standards for disclosing related companies, and whether there is a release that is good for speculating stock prices.Shareholder reductionSituation. “The Shenzhen Stock Exchange also requires the company to explain whether the relevant shareholders are insiders of the termination of the order, whether there is insider trading, and whether the company does not disclose progress information in a timely manner to cooperate with shareholders to reduce their holdings.

See also  The Ningde era has been falling and falling, but institutions are still optimistic about these concept stocks – yqqlm

Taking advantage of the “swing ride” of the Ningde era, the stock price of Huazi Technology has risen from a low of RMB 7.42 per share to RMB 37.30 per share this year, an increase of up to 4 times. 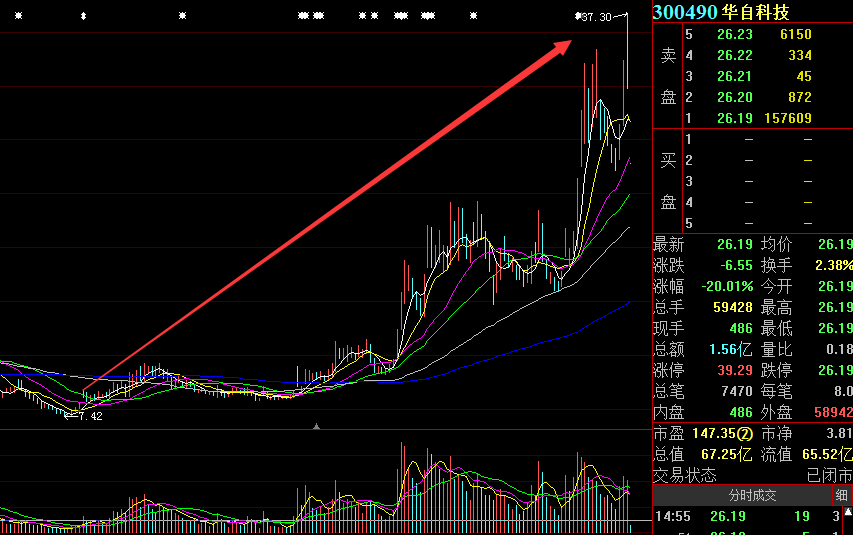 Just relying on Ningde era concept stocks soaring 4 times, but canceling the large orders that accounted for more than 40% of last year’s revenue, this is unavoidable.

As soon as this incident occurred, there was an uproar in the market. Some netizens even bluntly said: “Using fake orders to push the goods out, and then…”

One stone caused a thousand waves of waves, and Huazi Technology opened a lower limit today. A reporter from China Business News called Huazi Technology as an investor and learned that Huazi Technology and Ningde Times had a total of 1.5 billion orders, and the total amount of cancelled orders this time was 480 million yuan.The reason for the cancellation was the insufficient production capacity of Huazi Technology itself, not other reasons.

Some netizens said they didn’t buy it, why did they take orders without production capacity?

Investors vomit one after another.It is worth noting that since the aftermarket of China‘s technologyLonghubangThe data shows that an agency seat bought 7.67 million yuan.

Not just finance: the blockchain can revolutionize any sector. But it is hard