Home Business Respond early in the morning!L’Oréal’s statement is coming to consumers complaints about Li Jiaqi and Wei Ya’s suspension of cooperation
Business

Respond early in the morning!L’Oréal’s statement is coming to consumers complaints about Li Jiaqi and Wei Ya’s suspension of cooperation

On the evening of November 17, Li Jiaqi and Wei Ya successively issued a statement saying that the two major anchors will suspend all cooperation with the official flagship store of L’Oréal Paris because the price discount of a certain mask in their live broadcast room does not match the previous promise.

After that, a number of related topics continued to ferment and quickly made it into the top ten on the Weibo hot search list, among which #李佳琦薇娅suspend and 欧莱雅合作#, #欧莱雅Customer service said Li Jiaqi said low price not count # two topics have rushed to the top No. 1 in the hot search on the entertainment list. 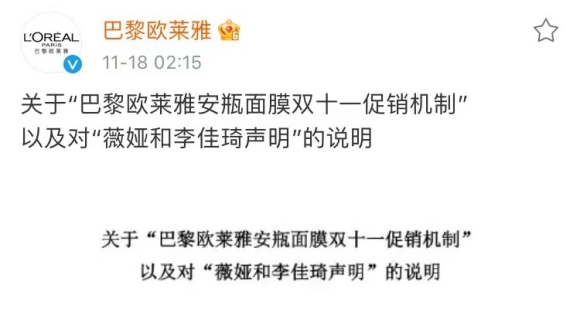 In fact, this is not the first time that “the lowest price on the entire network” has caused a turmoil. Similar situations have already appeared in other brands before. Related analysis pointed out that under the background that live broadcast e-commerce users account for 40% of the number of netizens, live broadcast has become an important part of the brand marketing system, and the head anchor attaches importance to the brand building of the live broadcast room, these events at first glance are the brand and the anchor, the anchor and the anchor. The game and topic making between them actually reflects the sensitivity of “the lowest price of the whole network” and “the biggest discount of the whole network” in the live delivery of goods.

On the evening of November 17, “Li Jiaqi Live Official Weibo” issued a statement stating that Li Jiaqi’s live broadcast room will suspend all cooperation with the official flagship store of L’Oréal in Paris. 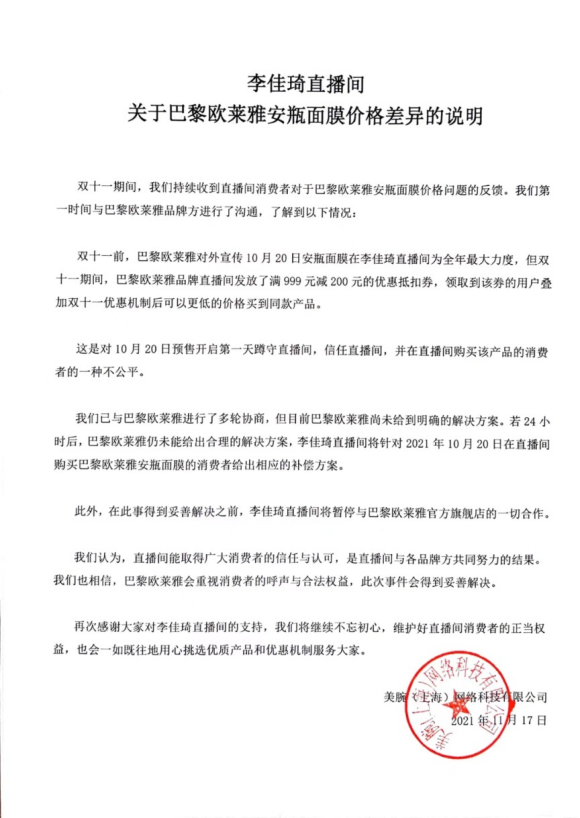 Li Jiaqi’s company, Meiwan (Shanghai) Network Technology Co., Ltd., said that it continues to receive feedback from consumers in the live broadcast room on the price of L’Oréal’s ampoule mask in Paris.

The United States said that after many rounds of negotiations, L’Oréal Paris has not yet given a clear solution. If 24 hours later, L’Oréal Paris still fails to provide a reasonable solution, Li Jiaqi’s live broadcast room will provide a corresponding compensation plan for consumers who bought the L’Oreal Paris ampoule mask in the live broadcast room on October 20, 2021. Prior to this, Li Jiaqi’s live studio will suspend all cooperation with the official flagship store of L’Oréal in Paris.

A few minutes later, Li Jiaqi dictated the above statement in his live broadcast room, which mentioned, “We also believe that L’Oréal Paris will value the voices and legitimate rights of consumers, and this incident will be properly resolved.”

Just four minutes after Li Jiaqi’s live broadcast of the above statement on Weibo, another major anchor, Wei Ya, also issued a public statement on the same product from L’Oréal on Weibo. On the afternoon of November 17th, Sina Black Cat Consumer Service’s official platform Weibo “Black Cat Complaint” said that recently, many consumers complained on the Black Cat Complaint Platform that the pre-sale of L’Oreal ampoules was bought in Li Jiaqi’s live broadcast room. Far more expensive than the “Double Eleven” spot. There have been nearly 10,000 complaints about L’Oréal in the past month. 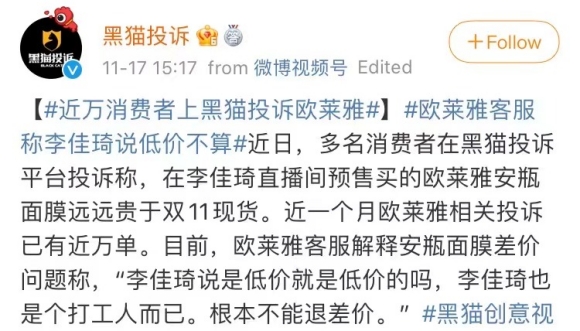 According to the relevant information released by the black cat complaint, L’Oréal customer service explained to consumers the issue of the price difference of the ampoule mask: “Does Li Jiaqi say that the low price is the low price? Li Jiaqi is also a hitman.” 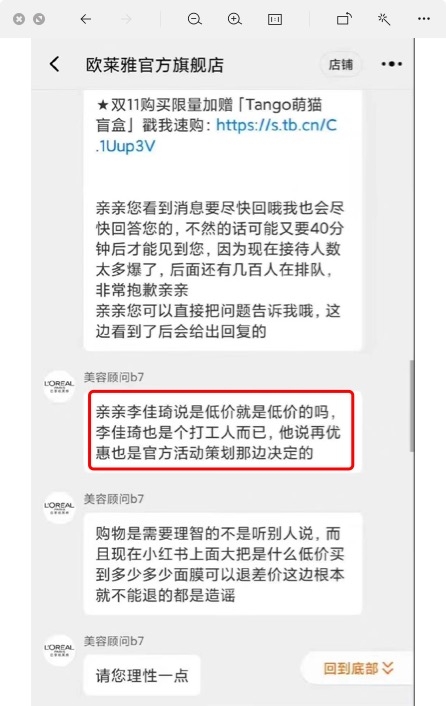 In addition, screenshots of netizens posted by the account subject such as the Black Cat complaint show that the official Weibo of L’Oréal Paris has published relevant Weibo three times on October 13, October 14 and November 11, including “locking Li Jiaqi’s live broadcast room”. , “Maximum intensity throughout the year” and other related expressions. 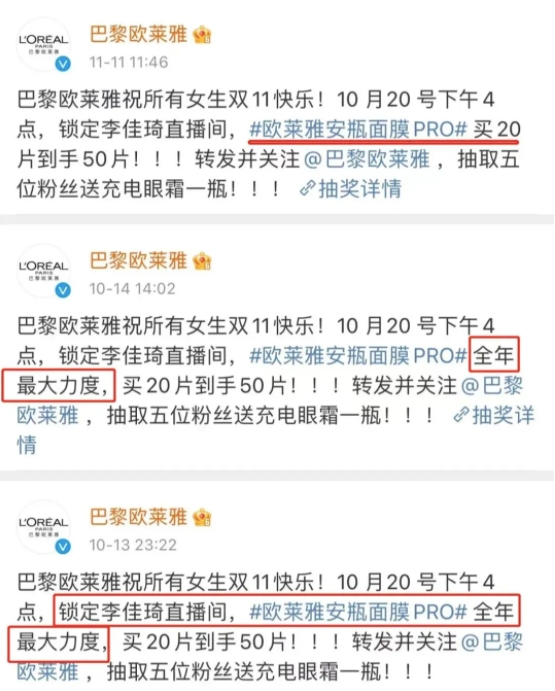 As of press time, none of the above content in the L’Oréal Paris Weibo account has been displayed.

L’Oreal responds early in the morning

In the response issued in the early morning of November 18th, L’Oréal Paris apologized for the “consultation of consumers caused by the excessive complexity of the promotion mechanism” and explained the “Weiya and Li Jiaqi Statement” incident. 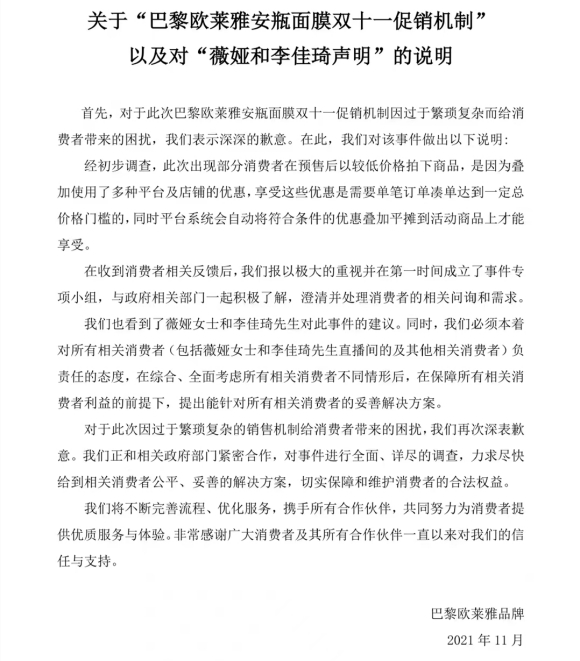 L’Oréal Paris stated that after preliminary investigations, some consumers took the goods at lower prices after the pre-sale because they used multiple platform and store discounts. To enjoy these discounts, a single order must be collected to reach a certain total. The price threshold, and the platform system will automatically superimpose eligible discounts on the event products.

L’Oréal Paris stated that it is working closely with relevant departments to conduct a comprehensive and detailed investigation of the incident, and strive to provide relevant consumers with fair and proper solutions as soon as possible to effectively protect and safeguard the legitimate rights and interests of consumers.

According to Tianyan Check, L’Oréal (China) Co., Ltd. was established in September 2000. The legal representative is Fabrice MEGARBANE (Fiberi), with a registered capital of approximately 58.009 million US dollars. It is wholly-owned by L’Oréal Co., Ltd. The company entered the Chinese market at the end of 1996, and has been punished by the market supervision department many times before for publishing false advertisements, false or misleading commercial propaganda.

France newly diagnosed more than 20,000 in a single day, officially confirmed to enter the fifth wave of epidemic

Based on the BMW platform to develop Foxconn...

Ceramics, packaging and plastics: the year of recovery...

Tourism, Immaculate Conception with the unknown of the...

Consumer rights: a commission of inquiry is born...

Artigiano in Fiera is back in attendance with...