Pepsi blue, Cocoa lipstick, and beverage brands are often the main colors of the brand, creating a strong “brand color” in the minds of consumers. While the “red and blue battle” between the two giants in the carbonated beverage industry, Pepsi and Keke, has not yet been decided, the “green elf” Sprite is suspected of “self-abandoning martial arts”.This afternoon, Sprite announced that it will drop its iconic green bottle packaging starting August 1. This means that the green Sprite you grew up drinking will be “out of print”!

Farewell to the green bottle, Sprite ends more than 60 years of history

According to CNN, the Coca-Cola Company said on the 27th local time that from August 1, Sprite will change the packaging of green plastic bottles to transparent packaging, thus ending the history of green bottles for more than 60 years.

And as soon as the news came, it immediately became a hot search. 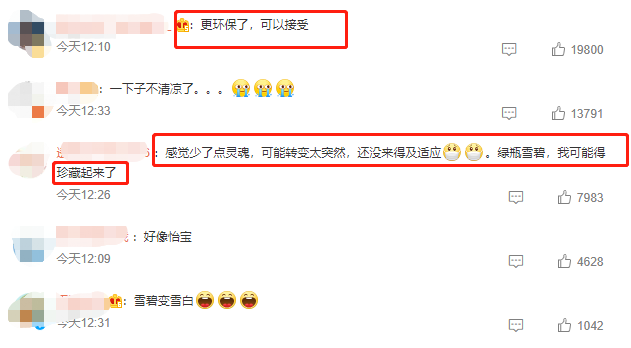 Some netizens said that it is more environmentally friendly and acceptable. And some netizens also think that they feel a little less soul, and the green bottle of Sprite must be treasured.

In response to this question, Coca-Cola said that the current bottle contains green polyethylene terephthalate (PET), which is usually only recycled into single-use items, while the use of transparent bottles can be used to make new bottles, Help to promote a circular economy for plastics and reduce plastic waste.

And Julian Ochoa, chief executive of plastics group R3CYCLE, said clear plastic bottles could be made into new bottles, helping to drive a circular economy for plastics.

Coca-Cola also said there will also be a new logo and packaging design on the Sprite bottle by then, aimed at “providing a more consistent look and sound around the world,” and the green hue will still be used on the Sprite label. The green tint will also be lighter for a more visible display on the clear plastic bottle.

In fact, Sprite has begun to gradually replace the “green bottle” with “transparent bottles” in the previous foreign markets. More specific flavors, like Cherry and Sugar Free, only use clear plastic.

In addition, bottled water brand Dasani will use 100% recycled PET plastic. According to an announcement from Coca-Cola, the move will reduce the amount of plastic waste used in 2019 by 20 million pounds.

Both are carbonated drinks, why are Coke and Mirinda bottles transparent, while Sprite bottles are green?

The transliteration of Sprite comes from English spirit, which originally means monsters and elves. In the 1940s and 1950s, there was always a cute cartoon sprite in the posters of Sprite, symbolizing its lively character. In addition, Sprite itself is a transparent liquid. If a transparent bottle is used, the visual effect will be poor, so the green bottle is simply used.

Today, the main color of Sprite “changes from green to transparent”, and whether “transparent elves” will continue to make the market willing to pay for it, let us wait and see.

Aston Martin DBR22: here is the speedster that...

Seize the critical period of economic recovery and...

The World Events that Affected the Value of...