Station B “received monsters” and won another 118 million payment license!Launched the “Light-seeking Project” today, and announced the new PV of the “Three Body” animation |

Every edited by Du Yu

A few days ago, B stood on the capital market frequently.

On the afternoon of November 19, the auction result of the 65.5% state-owned equity of Zhejiang Yongyi Electronic Payment Co., Ltd. was announced. The buyer was Shanghai Kuanyu Digital Technology Co., Ltd., the main company of station B, with a transaction price of 118 million yuan.

On the evening of November 19, Aofei Entertainment announced that it would sell 100% of its wholly-owned subsidiary Beijing April Star Network Technology Co., Ltd. to Shanghai Phantom Information Technology Co., Ltd. for 600 million yuan. Shanghai Magic Power is the entity company behind Station B.

News on the evening of November 20th, B stood at the 2021-2022 Guochuang Animation Works Press Conference, launched 51 new animation works, and launched the “search for light” plan to tap and support more domestic animation creators.

Station B gets a payment license! 118 million bought 65.5% stake in Yongyipay

According to the Daily Economic News report, before this, Ningbo Hengshun Auction Co., Ltd. issued a state-owned equity auction announcement, stating that it was entrusted by Yuyao China Plastic City Group Co., Ltd. and Yuyao China Plastic City Logistics Co., Ltd. to be scheduled at 9 am on November 19th. At that time, Yongyi paid 65.5% of the state-owned equity in the public auction, and the starting price was 117,965,500 yuan.

On the afternoon of the 19th, the Ningbo Public Resources Exchange Center announced the auction results, stating that Shanghai Kuanyu had obtained the auction at a price of 117,965,500 yuan.

It is worth noting thatThe official website of station B shows that Shanghai Kuanyu is the main company of station B. The reporter saw in the National Enterprise Credit Information Publicity System that Chen Rui, the legal representative and executive director of Shanghai Kuanyu, holds 100% of the company’s shares. And Chen Rui also serves as the general manager of Shanghai Bilibili Technology Co., Ltd., the executive director of Phantom Technology (Shanghai) Co., Ltd., and the actual controller of Shanghai Phantom Information Technology Co., Ltd. According to the official website of Yongyi Payment, Yongyi Payment obtained the “Payment Business License” issued by the People’s Bank of China in June 2012.

With the success of this equity bidding, Station B will formally join the “Payment Licensed Army”.

According to the information on the issuance of the payment business license issued by the Central Bank, the license business type of Yongyi Payment is Internet payment, and the business scope covers the whole country. This means that station B will have the legal qualifications to carry out national Internet payment services, and the license will be valid until June 26, 2022.

According to the online information, the transferees of the equity are Yuyao China Plastics City Logistics Co., Ltd. and Yuyao China Plastics City Group Co., Ltd. The former holds 56.5% of Yongyipay and the latter holds 9%. Through equity penetration, it can be seen that the actual controllers of the two companies are the State-owned Assets Management Office of Yuyao City.

In the evening of November 19th,Aofei Entertainmentreleaseannouncementsay,Transferring 100% of its wholly-owned subsidiary Beijing April Star Network Technology Co., Ltd. to Shanghai Phantom Information Technology Co., Ltd. for 600 million yuan. The announcement shows that after preliminary calculations, this transaction will increase the investment income of Aofei Entertainment by approximately 28 million yuan, which is regarded as non-recurring gains and losses; the company’s goodwill is expected to decrease by 448 million yuan.

It is worth noting that Shanghai Magic Power is the entity company behind Station B. The essence of this transaction is that Aofei Entertainment will transfer its original comics platform “Youyou Qi” to Station B.

Station B, which started from the second dimension, actually has a large number of animation layouts from the beginning.According to iResearch, China’s Animation Industry in 2020research report“show,Station B has invested in 26 animation-related companies in the three years from 2017 to 2019. At the same time, animation works adapted from multiple head comic IPs under “Youyou Qi” were also broadcast simultaneously at station B. Among them, the second season of “Soul Soul Street” was broadcast exclusively on station B with more than 300 million views. 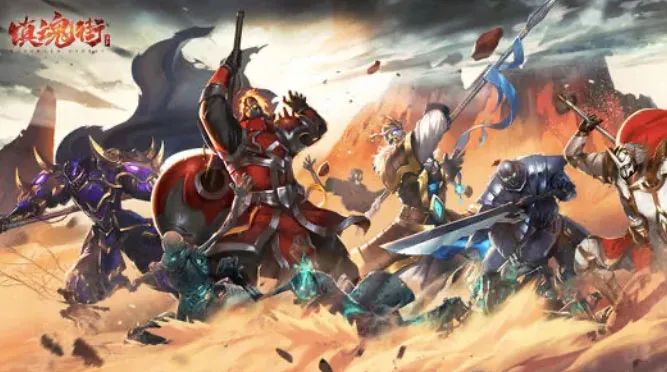 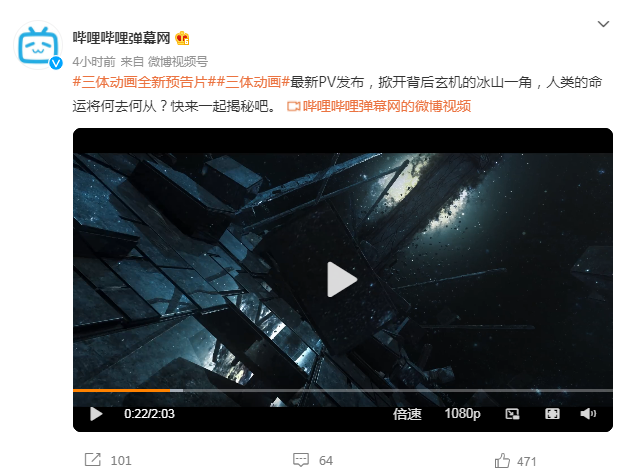 Station B announced a new trailer for “Three-Body” animation, “Legend of Sword and Fairy Four”, “Infinite World”, “Chinese Qi Tan” and other new works, as well as the second quarter sequel of “Five Elements in Wushan·Xichuan Magic Purple Forest” and “Agent of Time”. At the same time, classic works such as “Soul Street” and “One Hundred Thousand Cold Jokes” will be continuously adapted and developed. 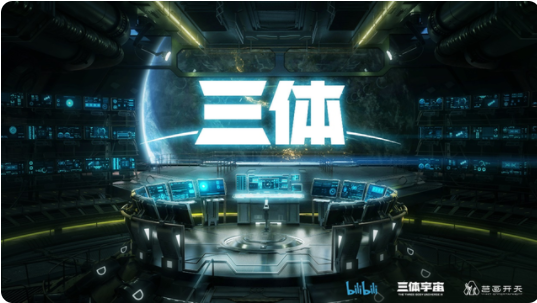 Looking at this year’s B station national creation film list, there are many breakthroughs. The most representative ones are the two original animations “Agent of Time” and “Five Elements in the Fog Mountain”.

“Agent of Time”, as a successful original fantasy suspense national creation work, has a total broadcast volume of over 180 million after its launch. The animation conveys Chinese-style humanistic care through plots drawn from real events. After the broadcast, it not only caused widespread discussion among domestic users, but also attracted a large number of overseas users’ attention. It became the first domestic animation to enter the top 20 of the MAL global animation list. 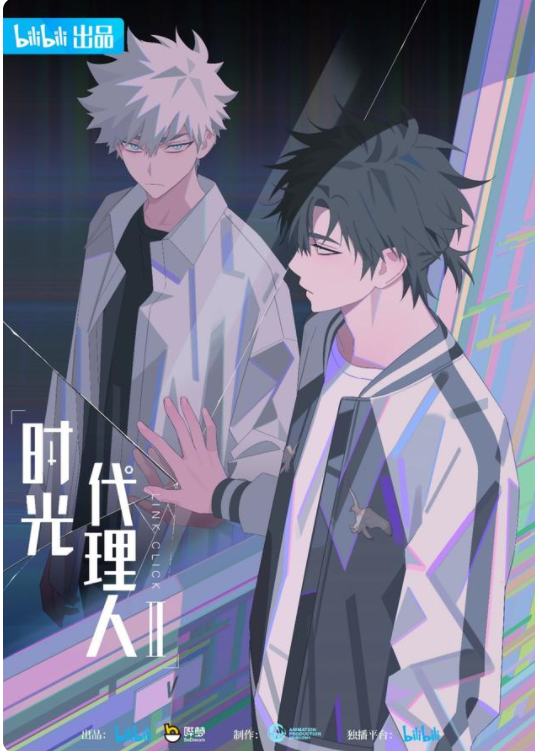 “Five Elements in the Fog Mountain” was born out of a short film released by director Lin Hun on Station B. The rich connotation of traditional Chinese painting and the Chinese cultural core derived from “Shan Hai Jing” impressed countless audiences. The official announcement of the sequel of these two works has satisfied fans’ expectations.

16 blockbuster works including “Yuanlong”, “Two Undoubted”, “The Daily Life of the Fairy King”, “The Wind and Cloud of the Long Sword”, “Tianbao Fu Yaolu”, “Diary of Sinicization” and other 16 major works have also announced that they will usher in a new season R; lt ‘; FL. The themes of these original works are diverse, including not only fantasy, antiquity, science fiction, but also modern themes such as campus and city.

Li Ni said, “The innovation in themes has allowed Guochuang’s audience to continue to expand.” She said at the press conference that 42% of the paying users of “Agent of Time” are atypical animation users. It proves that Guochuang content can cover a larger group.

The data shows that in the past four years, the cumulative number of viewers at station B Guochuang has exceeded 340 million, the viewing time has exceeded 1.92 billion hours, the average annual growth rate has reached 40%, and the total number of user interactions has reached 2 billion.

Since 2020, 24 works of station B have been online in all regions of the world. In 2021, NETFLIX, Funimation, Sony Music Solutions, Aniplex and other companies purchased the copyrights of national creative works such as “Blessing of God” and “Agent of Time” for the first time.

Since 2018, the National Innovation Conference has been held for 4 consecutive years, and a total of 178 national innovation works have been produced. Station B has become one of the largest domestic animation producers in China. Li Ni, vice chairman and COO of Station B, said at the press conference that Guochuang will definitely become the mainstream of the domestic cultural consumer market in the future, but the future goal of Station B should not stop at the domestic cultural consumer market.

See also  Ping An Fund Wang Minglun: Public REITs themselves are different from stocks and are more suitable for long-term holdings to rationally look at the price fluctuations in the secondary market_Sina Finance_Sina.com

Digital advertising, the underestimation of the “right context”