Sustainability and sophisticated technology for the new electric and hybrid Lexus

One million cars a year in 2030, and all electric in Europe, before pistons disappear in 2035. Lexus wants to do what others say, but more gradually by leveraging a strong and deep tradition in electrification. from the RX 400h in 2004 to the present day when, out of the 760 thousand units that consecrate it to the fourth world premium force, the 72 thousand sold in Europe at 96% have an electric motor and a battery.

However, the time has come to increase the doses of electrons and here is the new NX which for the first time combines the full-hybrid (4-cylinder 2.5 electrified 244 hp) with a plug-in hybrid system which, thanks to the 18 battery, 1 kWh, ensures an electric range of 69 km and consumption of 0.9-1 liters / 100 km equal to 20-26 g / km of CO2. The powertrain (as well as the Ga-k platform) is taken from that of the Toyota Rav4 with a handful of more horses (309 hp against 306 hp) and a different management of the three electric motor generators (two front and one rear) to have a different driving dynamics, more oriented to the “driving signature” that Lexus would like for itself, giving itself a new recognizability thanks to the road qualities. Electrification therefore not only for efficiency, but to add emotions to a brand that has always dwelled on the reasons and has long started a path towards the emotions of customers starting from style.

From this point of view, new features emerge such as the hourglass grille that is taller and thinner at the waist, the single rear light assembly and the Lexus lettering in full instead of the L in the ellipse that was presented for the first time at the Los Angeles Motor Show. Angeles in 1988. A move therefore to be understood as a small gesture of distancing, at least ideally from the ellipses of mother Toyota. The other big news is the fifth generation of RX which, with its 3.5 million units sold, represents practically a third of all Lexus on the road. Identical dimensions (4.89 meters), has more dynamic proportions, weighs 90 kg less and has more space inside where materials of animal origin are banned and the driver’s seat follows the tazuna setting (the reins of the horse, in Japanese ). Not one, but three hybrid systems, all with 4-cylinder engines: predictable the full-hybrid and the plug-in hybrid, the same as the NX, a surprise instead the new 371 hp sports hybrid system with 2.4 turbo engine and gearbox 6-speed automatic instead of the planetary gear transmission. 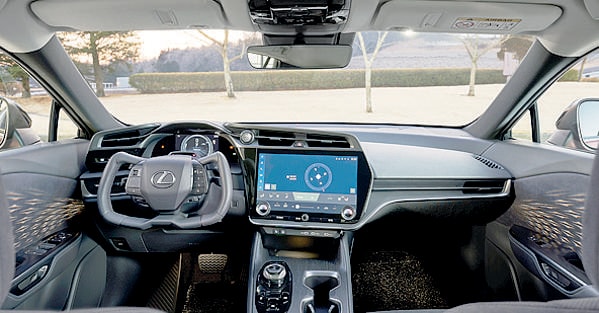 The dashboard of the electric RZ 450e. The salient elements are the large 14 “screen (which we also find on the new NX and RX) and the steering wheel.

So final and complete goodbye to the scooter effect to have an immediate response to the accelerator, also thanks to the bipolar Ni-Mh batteries: non-rechargeable and less energy-dense than lithium-ion ones, but faster in power delivery. as well as being less expensive, more environmentally friendly and easier to recycle. And for the sporty sensations there are also 21 “wheels, brakes with 6-piston calipers, electronically controlled suspension and a rear axle equipped with 4 steering wheels and an 80 kW electric motor, the same mounted on the new RZ, Lexus’ first “native” electric (e-Tnga platform). 4.8 meters long, it has a beautiful style, 230 kW in total and a 71.4 kWh battery with 96 prismatic cells rechargeable up to 150 kW for a range of over 400 km. The dashboard is futuristic and will find its completely ideal with the by-wire steering system joystick: only 150 degrees for a complete turn. But this is only the beginning. In the near future there are also a small one, to be placed under the UX, and six other electric models: two hatchbacks, a midsize sedan, a convertible, a large suv and a super sports car with 4 motors, solid state battery and a 0-100 km / h in 2 seconds. It is destined to represent a technical and image breakthrough for the brand, just like the LFA super sports car was in 2011.

Waiver of 4 billion for “fairness”. Basf heiress Marlene Engelhorn: “I couldn’t be happy”