Home Business Sym Joyride 300, the test of the new scooter with a flat platform
Business

Sym Joyride 300, the test of the new scooter with a flat platform

One of the features that those who use the scooter in the city often look for is the presence of a flat platform on which to rest the gym or shopping bag during short journeys. Among the medium displacement scooters (about 300 cc, very popular today) the choice is reduced to three models: alongside Honda Sh350 and Kymco People 300 S, the Sym Joyride 300 has now arrived, which boasts a lower price, 5 thousand euros. , against the nearly 6 thousand of the Japanese and the 5,700 of the Taiwanese compatriot.

Sym, which sold 12,000 vehicles in Italy in 2021 and today boasts a growth of 33% compared to last year, already has two models with 300 displacement with low wheels (Cruisym and Joymax) and thus completes the offer with a high wheel. : 16 “at the front and 14” at the rear. The build quality of the Joyride 300 highlights the leap in quality made by Sym in recent years: the scooter is finished with care and sports an aggressive and streamlined line with full-LED lights and LCD display. Pushing it is the well-known 278.3 cc single-cylinder, capable of 26 hp for an indicated maximum speed of just over 130 km / h (even with the writer who is in the saddle who weighs around a hundredweight). 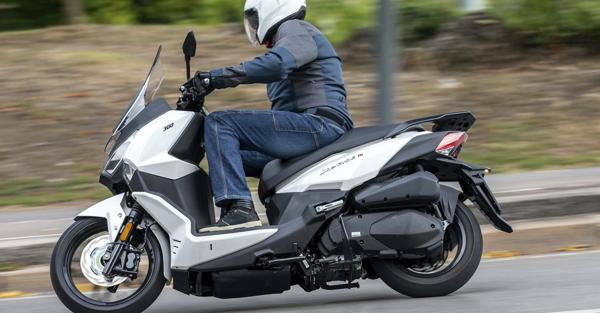 We tried it in the Milanese traffic with an extension on the ring road and the motorway. In the saddle, well padded, you are comfortable, even if you exceed 190 cm: the only attention is to keep your legs slightly open because otherwise you touch (painfully) with your knees the rear shield where there is a compartment with a USB socket for fast mobile phone charging; the windshield can be raised but four screws have to be unscrewed. Under the saddle enters a jet helmet with a long visor, a rainproof suit and a little more space is left over; the luggage rack for the top case is standard. The Joyride features keyless ignition, with the knob also unlocking the seat and the 12 liter fuel filler flap.

In traffic, the Joyride is a… eel: you switch between cars with ease thanks to the remarkable agility of the scooter and the liveliness of the engine which responds quickly and without uncertainty to the transmission. The brakes are slightly aggressive: the 260 mm front disc brakes the scooter’s approximately 200 kg in running order very well. On the cobblestones, the fork and the double shock absorber well preserve the back (and fillings) of the rider and passenger. When the speed increases, the Joyride 300 protects quite well (only the helmet remains a little exposed, but the windshield was in a low position) and demonstrates a good stability: it travels at 130 km / h at the limit of the scooter’s possibilities, sign that some stretch of the motorway is perfectly within reach of the Sym. That also offers the peace of mind of a four-year warranty and the same number of roadside assistance that includes a puncture and accident.

With the PIDs, Unioncamere and Dintec aim at the digitization of micro, small and medium-sized enterprises

F1, Leclerc and the Budget Cap: “If you make a mistake you have to be punished, but I don’t judge”

Protests in China and oil slow down the...

Ikea ready to reduce prices in the wake...