Judging from the video released by the media, the main building of the Berlin factory has been basically completed, and Musk said that if there are no accidents, it will start production next month.

The biggest highlight of the Berlin factory is the introduction of Tesla’s current most advanced manufacturing and product design technologies. Tesla also exhibited all of them without reservation.

An integrated die-casting machine has been installed in its factory, which can directly die-cast the front and rear two-section body of Model Y, thereby greatly reducing the body’s parts and production complexity.

The previously released 4680 batteries have also reached the stage of getting on the car, and are directly laid into the chassis in the form of CTC. This can further reduce the number of parts and weight of the battery pack, thereby increasing the endurance of the vehicle.

These two technologies were proposed by Tesla last year. They are both cutting-edge technologies in the automotive industry. There are no mass production and application cases, so they have also been questioned. But with the gradual completion of the Berlin factory, Tesla has responded to doubts with actual samples.

In addition, Tesla also exhibited programmable projection headlights. At the same time, a large number of industrial robots were arranged inside its factory, which greatly reduced the need for labor.

In order to show its technological paradigm, Tesla also arranged a large Ferris wheel and a magnetic storm coil (Tesla coil) outside the factory, giving a full score in the technological punk atmosphere.

4680 batteries are unveiled, CTC technology is also ready to go on the car

Among the videos displayed by the media, the most amazing thing is the 4680 cells that Tesla showed at the Battery Day event last year.

From the video of the media, Tesla’s Berlin factory may be the first factory to use this product. In the displayed products, 4680 batteries can already be seen in the body of Tesla Model Y. 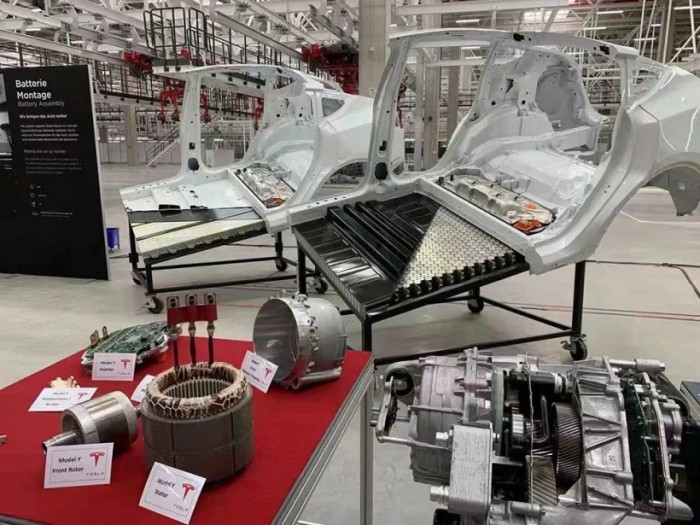 The 4680 cell has a diameter of 46mm and a length of 80mm. The size is twice the size of the 2170 cell used by Tesla before. The energy of the single cell is increased by 5 times, and the output power is increased by 6 times. It is matched with the new assembly process. , Which can increase the battery life of electric vehicles by 54%, reduce the price of batteries per kilowatt hour by 56%, and reduce production costs by 69%.

Since the release last year, companies such as Panasonic and LG are researching and improving their production lines, hoping to win Tesla’s orders. Research production.

At present, Tesla’s pilot plant at Kato Road in Fremont is accelerating the production of 4680 batteries. In addition, Tesla also equipped the Berlin factory with a battery factory, the main product is also 4680 batteries. On the morning of September 19, German time, the Tesla battery factory has broken ground in Berlin, Germany.

According to Tesla’s plan, before the completion of the Berlin battery factory, Tesla will send the power distribution cores from the pilot plant on Kato Road in Fremont to Germany. From this point of view, Tesla will exhibit in the factory this time. The 4680 batteries that came out should have been shipped from the United States. But the most surprising thing is not Tesla’s 4680 batteries, because this product is being developed by multiple battery companies, and the realization of the installation is also a sure thing. What is really surprising is that Tesla will announce it before. The CTC technology (that is, the direct integration of the battery cell into the vehicle chassis) was also demonstrated.

Tesla believes that this assembly process can save 370 body parts and reduce body weight by 10% while maintaining the same capacity. At the same time, the battery is closer to the center of the body, which can better balance the body and improve stability.

But directly omitting battery modules and battery packs has no previous experience, and Tesla is the first company to try to make such a product. Judging from the photos, Tesla has designed two solutions that are suitable for 2170 cells and 4680 cells, so that the old batteries can also use this technology. ▲ 2170 batteries can also use CTC technology

However, judging from the cell models announced by Tesla on the spot, in addition to 4680 cells and 2170 cells, there are more batteries of different sizes. It is unclear whether these cells will use CTC technology in the car in the future.

He believes that Tesla used a lot of glue in the design process to fill the space between the cells and the upper and lower cells, which can not only complete the structure connection, but also play a certain role in blocking heat conduction. .

In terms of safety, in order to allow the cells to discharge the gas as soon as possible in the case of thermal runaway, Tesla has designed multiple pressure relief valves on one side of the battery pack, facing downwards. After adopting CTC technology, Tesla directly abandoned the concept of the upper cover of the battery pack. As you can see in the video, Tesla’s seat is installed directly above the battery. 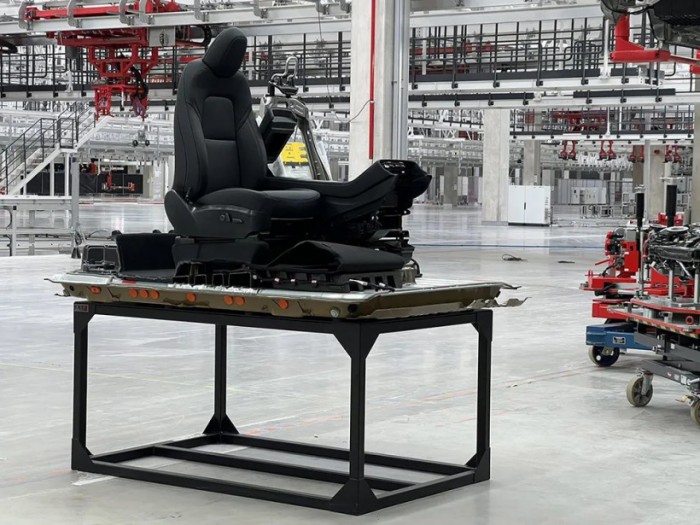 ▲ The front seats can be placed directly on the battery pack

From this point of view, Tesla’s CTC technology directly revolutionized the original chassis.

An expert from a traditional car company told the car company that after adopting this design, the battery energy and output power have been improved several times, and the cruising range and top speed can also be improved.

But she also believes that the battery cells are placed directly in the chassis space without a separate battery shell outsourcing, and they are still facing certain challenges in terms of insulation and collision.

Judging from the video displayed by the media, Tesla has indeed made samples of CTC plus 4680 batteries, and these technologies will also appear on the Model Y models produced in Berlin, and whether this product can truly resemble special features. Sla said that it is so good, and it can only be verified when the actual product appears.

Large-scale integrated die-casting parts are on duty, and the production line is highly automated

Judging from the video shot by the media, Tesla’s Berlin factory may be the most intelligent Tesla factory at this stage. 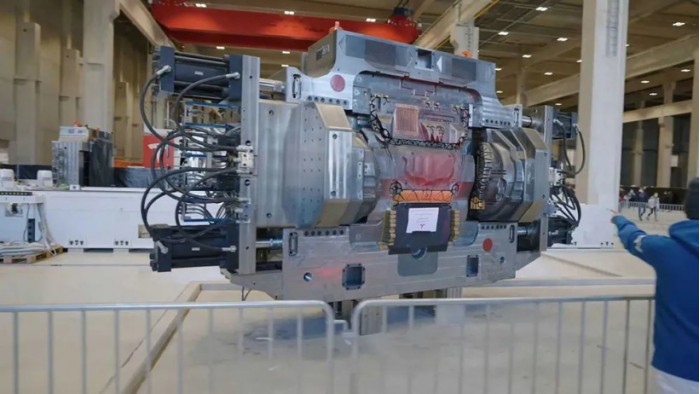 In the video, you can see the die-casting machine of the Tesla Model Y body. Through two molds, the front and rear two-section body of the Model Y can be directly die-casted. However, the traditional production method can also be seen in the factory, which presses various parts of the car body and finally completes the later assembly work. This may be Tesla’s current approach in order to increase production. After all, large-scale integrated die-casting machines require a lot of space and are difficult to install. They can only gradually change to the direction of comprehensive integrated die-casting machines. 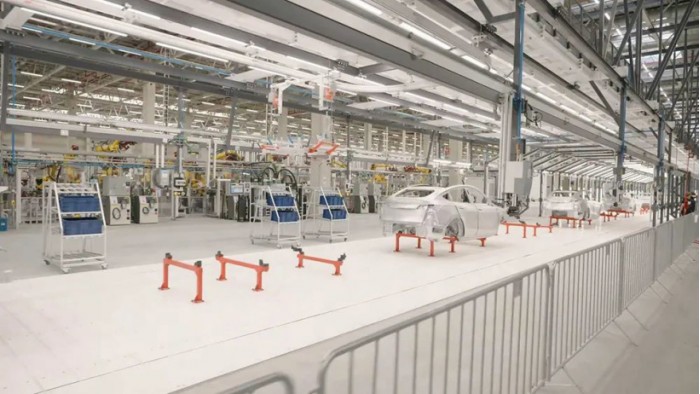 In addition, in the visit video taken by the media, Che Dong found that there is very little manual demand inside the Tesla Berlin factory. Almost all projects are operated by robotic arms, and the whole process is very fast and orderly.

It is precisely because of the use of integrated die-casting machines and industrial robots that Tesla is very confident in the production capacity of the Berlin factory. As you can see from a picture, Tesla wrote on the advertising board inside the factory: “Our The team is supported by a large group of robots that can weld, rivet and glue car parts. With highly precise and fast movements, we produce 1 car body every 45 seconds.”

A Tesla fan calculated the output of Tesla’s Berlin factory based on this figure. At the speed of one body every 45 seconds, the Berlin factory can produce 700,000 cars per year. 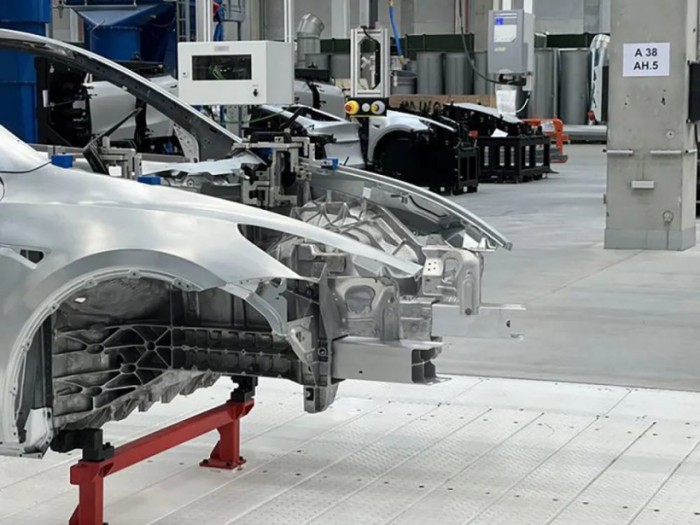 Musk also responded to this. Musk said that the Berlin plant is expected to achieve 45-second continuous production cycles. On average, normal production can be achieved 75% of the time within a week. If 7 by 24 all-weather production is implemented, then the Berlin plant It can produce 10,000 vehicles per week.

See also  The Three Gorges Dam opens a hole for flood discharge in response to the "Yangtze River No. 1 Flood in 2021"-CHINA 中国- cnBeta.COM

However, based on past experience, Tesla’s Berlin factory will also experience a period of capacity ramping. Once the factory reaches its peak production level, Tesla may make greater waves in Europe.

And as Tesla continues to lay out and build new factories in many places around the world, it may not be impossible for Tesla Chairman Robyn to say that “the turnover will exceed 20 million vehicles in 2030”.

In addition to the significant improvement in production, Tesla’s Berlin factory is also conducting some black technology tests. In this open day, Tesla demonstrated a new type of car lights, which can be adjusted according to the front The road conditions are adaptively adjusted to ensure that users can get a better view when driving at night.

The new headlights use a relatively high-resolution LED matrix, and can even project the “TESLA” logo on the wall. 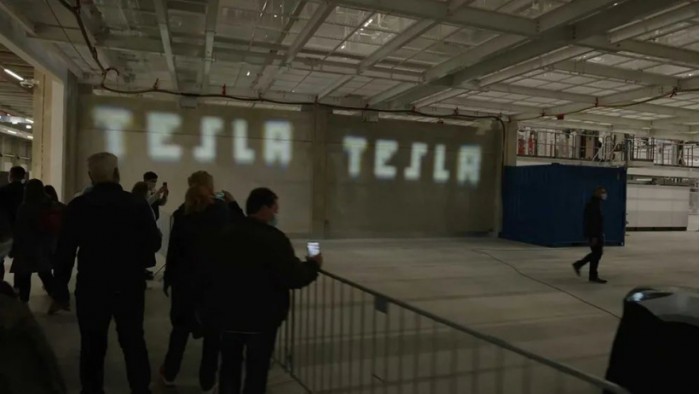 But say one thousand words and ten thousand, all of Tesla’s ideas are also based on the production of the Berlin factory.

Compared with the smooth sailing of the Shanghai factory, the construction process of Tesla’s Berlin factory can be described as twists and turns. First, because the tree felling was criticized by the German environmental protection department, Tesla had to promise to plant trees in other areas. The factory has also been suspended due to various incidents such as protecting animal species and affecting local residents’ water use. Last year, it was also affected by the epidemic.

Under the influence of various factors, although Tesla’s Berlin factory had a plan at the end of 2019, it was not completed until recently.

Judging from the video shot by the media, the main building of Tesla’s Berlin factory has been completed, and a complete production line has been established inside the building, which has basically reached the state of production. But at present, Tesla’s Berlin plant is still short of the approval of the German Ministry of Environment.

Musk hopes to get approval in the next few weeks. He believes that the first batch of models produced from Tesla’s Berlin factory will be off the assembly line next month.

However, the public consultation on Tesla’s Berlin factory will end on October 14th, after which the Ministry of Environment will make a final decision.

From this point of view, Tesla’s “Giga Fest” factory open day event held at the Berlin factory should be aimed at letting the public know more about the factory. This event provides 9,000 tickets, and residents of Brandenburg, where the Berlin factory is located, can get priority.

The video shows that Tesla’s Berlin factory has also made a lot of preparations for this event. The Ferris wheel and magnetic storm coils in the factory all show the grandness of this event.

Bulldozers at the historic Garibaldi cinema in Codognè: in its place a B&B and cultural center