Home Business The first U.S. Bitcoin futures ETF has the second highest turnover in history on the first day of listing-digital currency/blockchain
Business

The first U.S. Bitcoin futures ETF has the second highest turnover in history on the first day of listing-digital currency/blockchain

The cryptocurrency industry ushered in an important watershed on Tuesday. The first Bitcoin-related exchange-traded fund (ETF) in the United States was listed, and the first day’s turnover set a record for the second highest in history. The ProShares Bitcoin Strategy ETF traded under the symbol BITO, rose about 4.9% to $41.94 on Tuesday. Bloomberg data shows that more than 24 million units were changed hands. Due to the settlement method of the fund, the net inflow or outflow of funds may not be announced until overnight on Wednesday.

BITO’s first day’s turnover was close to US$1 billion. Athanasios Psarofagis, who focuses on industry research, said that this scale is second only to BlackRock’s carbon neutral ETF, which has a higher turnover because of its pre-seed investment. According to reports, BITO-based option contracts will begin trading on the NYSE Arca Options and NYSE American Options exchanges on Wednesday.

Bitcoin advances to record highs, only a stone’s throw away from 65,000 USD。

The cryptocurrency community and Wall Street investors have been looking forward to this ETF for a long time, and many people have thought for many years that a Bitcoin-based ETF should be launched long ago. ProShares funds are based on Bitcoin futures contracts and are filed under mutual fund rules, which US Securities and Exchange Commission (SEC) Chairman Gary Gensler previously stated that the rules provide “significant investor protection.”

Simeon Hyman, global investment strategist at ProShares, said, “We are very pleased to bring investors the first Bitcoin-linked ETF, which will provide them with an important opportunity to invest in Bitcoin through regular brokerage accounts. Many have been waiting for simple methods and People with sound investment methods can now participate and include it in their portfolio.”

Retail investors scrambled to buy the ETF on Tuesday. BITO is one of the most purchased assets on the Fidelity trading platform. As of 2:55 pm New York time, customers on the platform had paid more than 8,800 orders.

Sam Bankman-Fried, CEO of FTX, one of the largest cryptocurrency exchanges, said, “This week’s bullish atmosphere is incredibly strong, especially for this ETF, the popularity is very positive.” 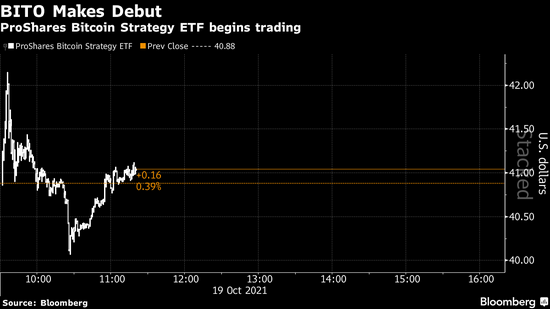 There are other futures-based Bitcoin ETFs waiting in line for applications. Valkyrie’s Bitcoin Strategy ETF will be listed on Wednesday under the symbol BTFD.

Passengers respond to the filming of Hainan Airlines sisters shivering, taking photos of winter clothes being made-IT and Transportation-Aviation