Home Business The official response to the problem of Wi-Fi failure in the Xiaomi Mi 11 series: Support replacement of a new machine with a half-year extended warranty-Communication Technology-Wi-Fi
Business

The official response to the problem of Wi-Fi failure in the Xiaomi Mi 11 series: Support replacement of a new machine with a half-year extended warranty-Communication Technology-Wi-Fi

At the end of last year, the Mi 11 series was released. As the beginning of the new decade, Xiaomi Mi 11 is equipped with WiFi 6 enhanced technology. The bandwidth is twice as high as the previous generation, reaching 160MHz bandwidth, and the transmission information density is increased by 20%. The final network speed is 2.1 times faster, up to 3.5 Gbps. Supports 4K QAM encoding for the first time. However, some users found that some Xiaomi 11 series mobile phones had special Wi-Fi problems, such as the inability to turn on Wi-Fi and hotspots.

In response to this, Xiaomi officially responded today, clearly stating:For users with such phenomena, after-sales testing, they support replacement of new machines.

And after replacing the machine, or if there is no problem but have concerns, you can apply for a half-year extended warranty service.

The following is the full text of “Service Policy on Special Issues of Mi 11 Series Products”:

1. For users with such phenomena, after-sales testing, support for replacement of new machines;

2. If there are other quality problems after the replacement of the new machine, it still supports 7-day failure return, 15-day replacement, one-year warranty, and a half-year extended warranty service is also provided. If the user who has the same WIF problem again after replacing the phone, he can return the phone or replace the phone again;

3. For users who do not have such problems and have concerns, they can apply for a half-year extended warranty service. 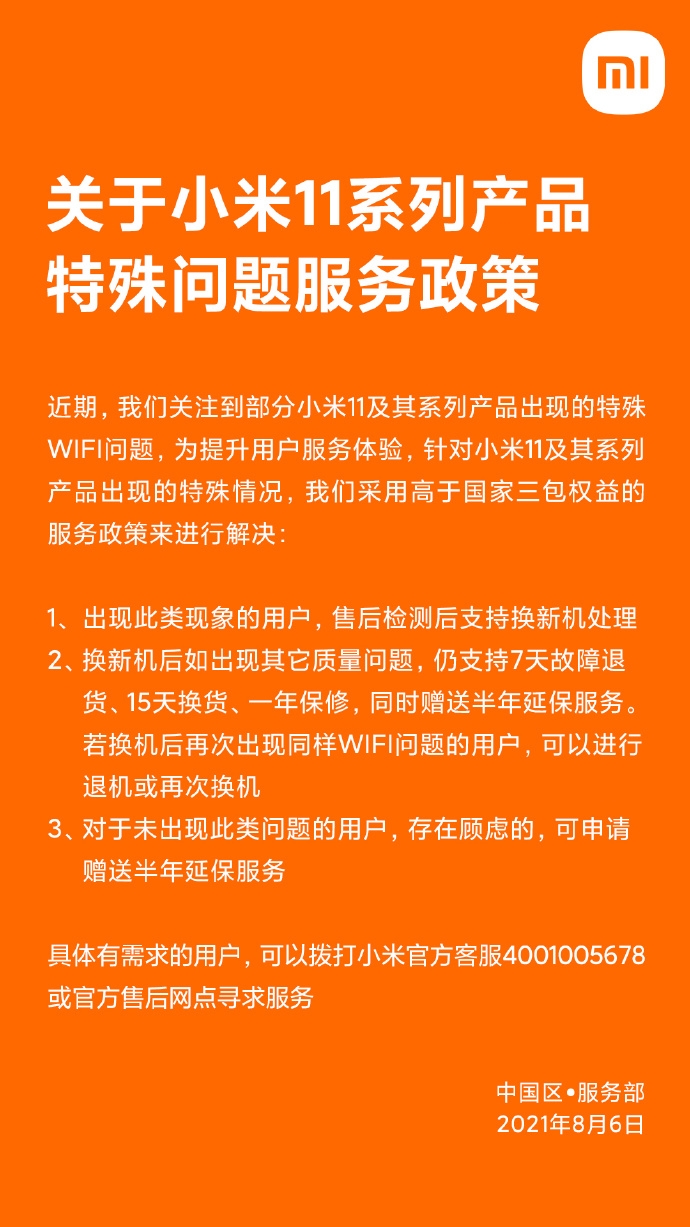 Valentino Rossi between gym, snow and pasta with bread: the secrets of an eternal champion

The study found that the SARS-CoV-2 antibody remained stable or even increased 7 months after the patient was infected-Scientific Exploration-cnBeta.COM