In early trading today, A shares rebounded in shock,The Shanghai Composite IndexCovered the gap down last Friday,CSI 300、SSE 50Both rose more than 1%.

On the disk, the concept of digital economy is fully active, digitalcurrency, software services, cloud computing, big data and other sub-sectors have set off a rising tide, while the pharmaceutical sector, which was very popular yesterday, has been fully adjusted. New crown detection, new crown drug concept,traditional Chinese medicine, Gene concept and other sub-sectors have dropped sharply.Northbound Fundsnet inflow3.221 billion yuan

The concept of the digital economy has strengthened again today, and stocks related to many sub-sectors have concentrated on the daily limit.

Since the New Year, favorable policies for the digital economy have also emerged one after another. A few days ago, the magazine “Seeking Truth” published an important article “Continuously Strengthening, Optimizing, and Expanding my country’s Digital Economy”; the National Development and Reform Commission also issued a document “Vigorously Promote the Healthy Development of my country’s Digital Economy”, proposing to focus on advancing key core technologies and speeding up Achieve high-level self-reliance and self-improvement; moderately advance the deployment of new infrastructure construction to consolidate the foundation for the development of the digital economy; further promote the digital transformation of traditional industries, and accelerate the deep integration of digital technology and the real economy.Earlier, the State Council issued the “14th Five-Year Plan for the Development of Digital Economy”, which made it clear that by 2025, the digital economy will enter a period of comprehensive expansion, and the added value of the core industries of the digital economy will account forGDPThe proportion reaches 10%.

The local governments are also in full swing to introduce relevant plans. Today, Hua Yuan, Deputy Secretary-General of the Shanghai Municipal Government and Director of the Municipal Development and Reform Commission, said that during the 14th Five-Year Plan period, Shanghai will speed up the construction of a new “3+6” industrial system, focus on accelerating the layout of new tracks, and actively seize the digital economy track. Promote the digital transformation of cities. In addition, it will guide enterprises to strengthen research on important platforms for future interaction between virtual world and real society, such as emerging industries such as the Metaverse.

Earlier, the Wuhan Municipal Government’s work report proposed to “accelerate the growth of the digital industry”, and the added value of the digital economy will account for more than 50% of GDP in the next three years; Dongguan City proposed that it will arrange financial funds of no less than 10 billion yuan in three years to promote the industry. Digitization and digital industrialization; during the “14th Five-Year Plan” period, Suzhou will dynamically invest more than 100 billion yuan in special funds to support the development of industrial innovation clusters in the digital economy era.

galaxysecuritiesIt is believed that in the future, the digital economy will enter a new development cycle from virtual to real. The new digital infrastructure will be supported by policy dividends and is expected to accelerate growth. The release of data elements, the increase in cloudification rate, and the increase in the penetration rate of industrial Internet applications will all be relatively clear. the beneficiary target. Highly recommented:UF network、Baosight Software、Kingsoft Office、Dongfangtong、Rena Smart、State Grid Communications、Tors、Tax Friends Shares。

The pharmaceutical stocks that were still hot yesterday suddenly cooled down and dropped to freezing point today. The new crown detection of the sub-sectors gapped down and opened lower. The sector index once fell by nearly 7%, the largest one-day drop since the index was launched.Aotai BioAt one point, the limit fell by 20%, and before the stock rose nearly doubled this year,Anxu Biology、Boto BioWaiting for nearly 20 stocks to drop by the limit or more than 10%; the concept of pylori also fell by nearly 6%.Haichen PharmaceuticalWaiting for nearly 10 stocks to fall by the limit or more than 10%; new crown drug concept, gene concept, anti-influenza,traditional Chinese medicineOther sectors were among the top decliners.The sharp decline in pharmaceutical stocks also drove related pharmaceuticalsETFAfter a sharp correction, 7 of the top 10 ETFs that fell today are pharmaceutical ETFs. 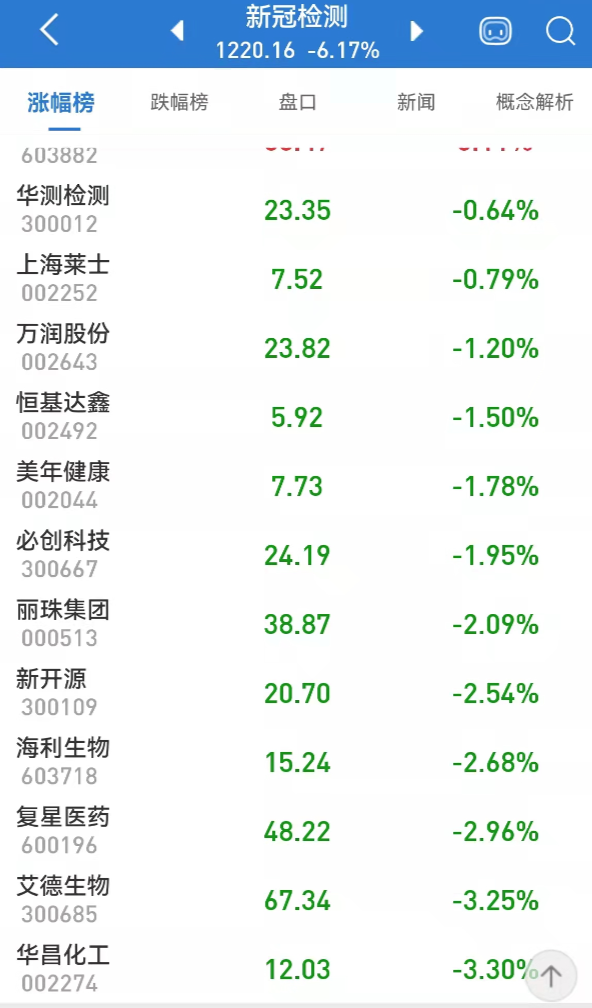 There are many factors in the collective growth of pharmaceutical stocks. The first is that the short-term increase is too large.Anxu Biology、Boto Bio、Hot View CreaturesIn the short term, the stock price has risen by more than 1 times this year, accumulating huge profits.

Secondly, due to the short-term skyrocketing, many pharmaceutical companies issued risk warnings today.announcement。GuangshengtangIt said that the anti-new coronavirus small molecule oral innovative drug project of Zhonglin Bio, a holding subsidiary of the company, is still in the preclinical research stage, and subsequent compound properties characterization studies are required to determine preclinical candidate compounds (PCCs), and complete preclinical pharmaceutical research and development. Pharmacokinetics, pharmacodynamics, pharmacology and toxicology studies in line with the clinical registration application, and after obtaining the clinical (implicit) license of NMPA to carry out Phase I, Phase II and Phase III clinical studies, after obtaining the corresponding safety and Only after the efficacy data can be submitted to the NMPA for drug registration applications, and after obtaining the drug registration certificate and passing the GMP compliance inspection of APIs, the project products can be produced and sold. The research and development of new drugs has the characteristics of high risk, high investment and long cycle. Investors are advised to pay attention to the risks.Hanyu Pharmaceutical、Shutai God、Hisun Pharmaceutical, Frontier Biology, etc. have also expressed similar views.

In addition, recently listed pharmaceuticalsNew crotchBreaks in succession.firstBeiGeneAfter breaking on the first day of listing, it continued to fall. As of today’s noon closing at 133.14 yuan, it has fallen by more than 30% from the issue price of 192.6 yuan.

Today, Maiwei Bio, which has the concept of a new crown drug, broke the market again. The lowest price fell by nearly 29% from the issue price. It can be said that it poured a basin of ice water on the hype of related concept stocks, causing them to cool down rapidly.

According to the prospectus of Maiwei Bio, the company carried out the neutralization activity test of 9MW3311 against the mutant strains of the new coronavirus originating in the United Kingdom, South Africa, Brazil, India and California, USA, and confirmed that 9MW3311 maintained the neutralization activity of the British mutant strain. , but partial or complete inactivation of mutants in South Africa, Brazil, India and California. This made Maiwei Bios hot before its listing, and market expectations were unprecedentedly high.

According to the closing price of 25.23 yuan at noon today, the market value of Maiwei Bio is as high as more than 10 billion yuan, but the latest financial data shows that in the first three quarters of 2021, itsOperating incomeOnly 10.71 million yuan, which is still based on a year-on-year increase of 134%. In 2020, Maiwei Bio’s annual revenue is only 5.3 million yuan.

Shanghai media: It is extremely unlikely that the Chinese Super League will make way for the AFC Champions League. BIG4 has a high probability of playing with the second team – yqqlm

The balance of the two cities and the...

4 companies delisted today, and more than 20...

The financing balance of 23 science and technology...

GEM: Issuance of GDR and listing on the...