The turning point of pig prices will show when these four leading pig companies can buy bottoms? _ Oriental Fortune Network

The winter of pig enterprises is about to pass.

This year, although the head pig companyMuyuan shares(002714.SZ)、Wen’s shares(300498.SZ)、new Hope(000876.SZ) andZhengbang Technology(002157.SZ) stock prices fell 9%, 2%, 36% and 42% respectively, but after hitting a new low in the middle of the year, the stock prices of various leading companies rebounded.inWen’s sharesRebounded more than 40%,new HopeIt also rebounded from the bottom by more than 30%.

After the pig price has experienced sharp rises and falls, what will the trend of pork stocks look like next year?

The pig breeding industry in my country has significant cyclical characteristics. The price of pigs fluctuates cyclically, generally, a cycle of 3 to 4 years.

Unlike general periodic products, for the pig breeding industry, the core point is profit. When large, medium and small farmers see that the market is profitable, they begin to enter, thereby increasing supply. When there is an oversupply in the market, the price of live pigs drops, and the price gradually approaches the cost line of each farmer, and the production capacity begins to clear, which gradually enters the next cycle. In a profit-oriented cycle, the industry implements market self-adjustment through prices.

The African swine fever epidemic in 2018 severely hit the pig breeding industry, and a large number of farms were forced to withdraw, resulting in a sharp decline in the industry’s production capacity. With the soaring price of pork and the effective control of swine fever, the supply of pork has recovered from surplus, and the fall of live pig prices is inevitable. On October 8 this year, the price of live pigs hit a stage low of RMB 10.78/kg, which was 73.69% lower than the high of RMB 40.98/kg in November 2019. It is already close to the 10-year low of RMB 10.01/kg. With the increase in demand at the end of the year and the inflection point on the supply side, the current price has stabilized at around 17.5 yuan/kg.

Since June, the self-breeding pigs have entered a loss phase. In early October, the loss per pig was as high as 771 yuan.In the third quarter of this year, listed top pig companiesMuyuan shares、Zhengbang Technology、Wen’s sharesandnew HopeGo to motherNet profitWith losses of 822 million yuan, 6.220 billion yuan, 7.189 billion yuan and 2.986 billion yuan respectively, the four major pig companies fell into a state of full loss.

But it needs to be pointed out that the losses of pig farming over the years mean that the bottom of the industry is approaching. 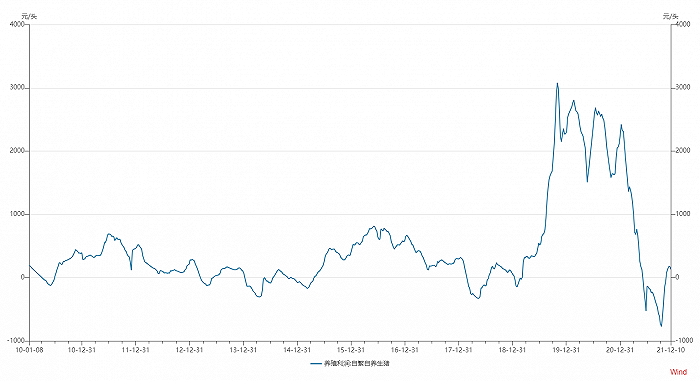 Continued losses have brought panic to farmers. According to data from Yongyi Consulting, in May this year, the average weight of commercial pigs slaughtered nationwide once exceeded 135 kg/head, and has fallen to 125 kg/head at the end of October, which is the lowest point since 2020. In the context of the rapid decline in pig prices, the decline in the average weight of slaughter indicates that the industry has panic selling, and farmers want to sell goods quickly.

After a series of panics and price drops, the industry’s turning point has been revealed. As of the end of September this year, the number of live pigs in my country was 43,800. Although it is still at the highest point since 2014, it has shown signs of decline compared with the 43,900 in June. 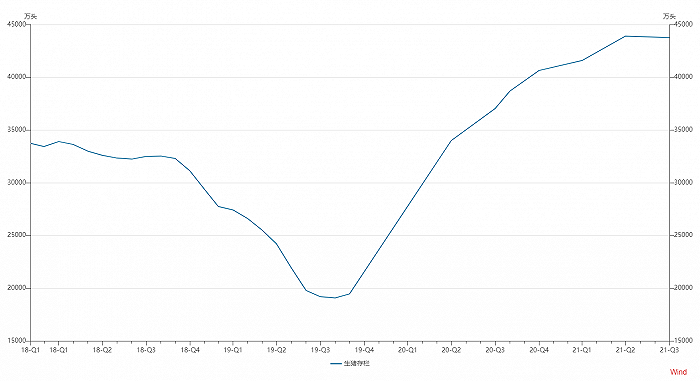 The more important indicator is the number of breeding sows. In October, the stock of reproductive sows in my country was 43.48 million, which has fallen by nearly 5% from the five-year high of 45.64 million in June. The stock of reproductive sows has declined for 4 consecutive months since July. The number of breeding sows often determines the pork production after ten months. The turning point at this time indicates that the turning point of the pig stock will appear in the second quarter of 2022.

See also  Suzuki Solutions, doors open on 22 and 23 May

Usher in a buying opportunity

From the data point of view, the pig price has reached the bottom. As a typical cyclical stock, pig companies usher in opportunities.

The price ratio of pig and food is a key profit indicator for measuring the pig breeding industry in my country, and it is also the basis for policy formulation by relevant agencies. When the ratio of pig and food falls below 5, a first-level warning will be triggered. At the beginning of October this year, the price of pig food fell below 4, hitting a ten-year low, indicating that the industry as a whole is in a stage of deep loss for ten years. In the same month, the Ministry of Commerce, together with the National Development and Reform Commission, the Ministry of Finance and other departments, purchased and stored 30,000 tons of central reserve pork. This is the fourth batch of central reserve pork carried out this year. It needs to be pointed out that purchasing and storage is more to give market confidence and stabilize sentiment. From a historical point of view, the average increase in pig prices within the first six months of purchasing and storage was within 20%. Essentially, the recovery of pig prices also requires self-regulation. 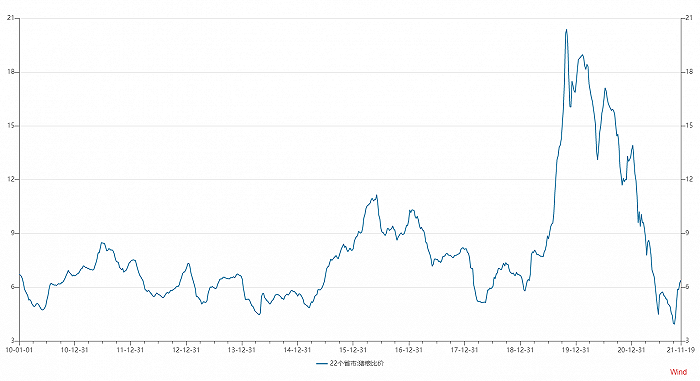 Therefore, the Jiemian News Research Department predicts that the pig price will be tested again in the middle of next year. Taking into account the large price fluctuations and rapid fluctuation rate in this round, combined with the turning point of breeding sows and the loss time of large pig companies, we expect that the price of pork will have a second bottom in the middle of next year, and the price will be higher than the previous low. , And the entire industry ushered in a good buying opportunity.

Specifically, from the net cash outflow of investment activities in the third quarter of this year, it can be seen that although the four leading companies have reduced their investment ratio year-on-year, Muyuan shares have the smallest relative reduction and the smallest debt-to-asset ratio. It is worth mentioning that this company completed a bond issuance of 9.55 billion yuan in August this year, effectively alleviating capital risks in the short and medium term, but due to the rapid decline in the current ratio in recent quarters, the capital side has also begun to face pressure.

Zhengbang Technology has a debt-to-asset ratio of 75.23% and a current ratio of 0.81. The company has begun to significantly reduce its investment.It should be pointed out that in early December, the rating agency Oriental Jincheng decided to downgrade the credit ratings of Zhengbang technology entities and “Zhengbang convertible bonds” from “AA+” to “AA”, and the rating outlook was “stable”. Debt problem, Zhengbang TechnologyannouncementHoldingshareholderZhengbang Group and parties acting in concert intend to introduce Cinda for market-oriented debtConversion, The scale does not exceed 1.98 billion yuan.

Compared with other pig companies, Wen’s shares expanded the most moderately in the previous round of pig cycle, so the low point of this round is also the least affected by the cycle. Regardless of the asset-liability ratio or the current ratio, the company’s debt pressure is the lightest among the leading pig companies. It is expected that in the future, it is expected to continue to “grow up” at low points by virtue of its capital advantage.

Literature from the other world. From Hawaii to TikTok, between saints and sirens a year of expected titles and many beginnings