The unit price exceeds 300 million US dollars! Intel won the first batch of second-generation High-NA EUV lithography machine 2nm will be the first to mass production

The unit price exceeds 300 million US dollars! Intel won the first batch of second-generation High-NA EUV lithography machine 2nm will be the first to mass production

On January 19, the global lithography machine giant ASML announced its latest financial report, and its fourth quarter 2021 and 2021 full-year results both hit record highs and were better than expected.

It is known that,EXE:5000 is mainly for 3nm process, and the second generation 0.55 NA EUV lithography machine TWINSCAN EXE:5200 will be used for 2nm process production. 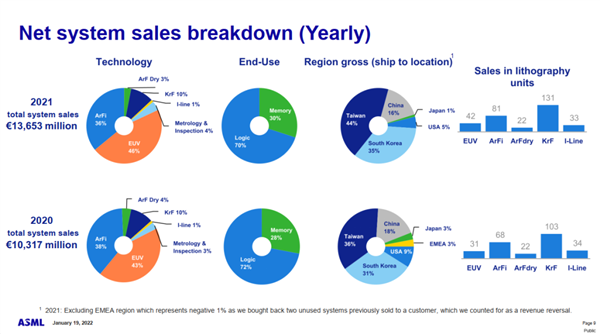 From the end use of the lithography systems sold, 70% are used in logic semiconductor processes and 30% are used in the manufacture of memory chips.

From the point of view of the final shipment place of the lithography system,China‘s Taiwan region contributed as much as 44% of sales, South Korea accounted for 35%, and mainland China accounted for 16%.

Peter Wen said: “The growth of EUV shipments for ASML in 2021 is not high, mainly due to the impact of the logistics center and supply chain issues we announced in the third quarter. But this is entirely driven by the installation of EUV lithography machines and The underlying revenue such as upgrades compensates, especially the productivity upgrades that we are able to offer to our customers. Our customers are in dire need of the additional capacity and there is a high demand. This segment has sales of 1.5 billion euros. In what we call the productivity enhancement package Driven by this, a large number of options have been installed, providing customers with additional wafer capacity.” 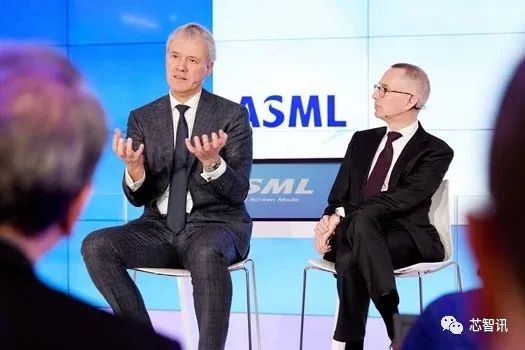 In the DUV business, ASML said the XT:860N has been delivered to its first customer by the end of 2021. This KrF system offers better performance and lower cost. In 2022, with the introduction of NXT:870, ASML will add KrF to the NXT platform, enabling it to take a major step forward in terms of productivity and cost of ownership, building on existing experience on this platform in ArFi and ArFDry .

In the application business, the first eScan1100 multi-beam inspection system, which is designed for high-volume production, is scheduled to be delivered in the next few weeks. With 25 beams (5×5), the eScan1100 is expected to provide a 15x increase in throughput compared to a single e-beam inspection tool for targeted in-line defect inspection applications.

The unit price exceeds 300 million US dollars, and TWINSCAN EXE:5200 has received the first order

At present, leading wafer manufacturers such as TSMC, Samsung, and Intel are also investing heavily in more advanced 3nm and 2nm technologies to meet the needs of advanced chips such as high-performance computing. The realization of the 3/2nm process needs to rely on ASML’s new generation of high numerical aperture (High-NA) EUV lithography machine EXE: 5000 series.

Peter Win revealed that in early 2022, ASML has received its first order for the next-generation TWINSCAN EXE:5200, marking another step in ASML’s path to introducing 0.55 NA EUV lithography. 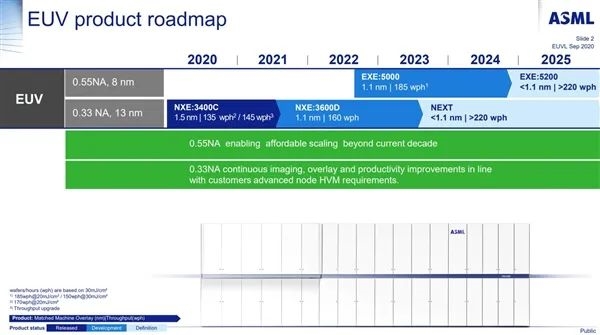 At the “Intel Accelerates Innovation: Process Technology and Packaging Technology Online Conference” at the end of July 2021,Intel has announced that it will mass-produce the 20A process (equivalent to TSMC’s 2nm process) in 2024, and revealed that it will be the first to obtain the industry’s first High-NA EUV lithography machine. The first order for ASML TWINSCAN EXE:5200 lithography machine came from Intel.

Martin van den, president and chief technology officer of ASML, said that Intel’s vision and early commitment to ASML’s High-NA EUV technology is a testament to the relentless pursuit of Moore’s Law. Compared to current EUV systems, ASML’s extended EUV roadmap provides continuous improvements at lower cost, time-frame and architecture, which will drive the chip industry for the next decade.

For Intel, getting the ASML TWINSCAN EXE: 5200 lithography machine first is the key to Intel’s determination that its process technology can surpass TSMC and Samsung to return to the leading position.

To this end, it is reported that Samsung is also urgently snapping up a Hight NA EUV lithography machine and asking ASML to directly pull it to the Samsung factory for testing.

In addition, TSMC also announced at the previous legal meeting that in 2025, TSMC’s 2nm process will be the most advanced technology in terms of density and performance.

On January 3 this year, a fire broke out in a factory of ASML in Berlin, Germany. The fire was extinguished that night and no one was injured in the fire.

According to the data, ASML’s Berlin factory is a parts factory, which mainly produces parts required for DUV and EUV lithography machines such as wafer tables, mask chucks and mirror modules.

“Customer demand for lithography systems exceeds our production capacity. Strong end-market demand puts pressure on our customers to increase wafer yield. To support our customers, we provide them with A high productivity upgrade solution and shortened production cycle times in our fab to deliver more lithography systems. One way to reduce lead time is by skipping some testing at our fab through a fast shipping process. Final testing and Formal acceptance will take place at the customer site and typically the acceptance process takes several weeks (sometimes three to four weeks). This will result in a delay in the recognition of revenue for these shipments until the customer formally accepts it, but it does provide our customers with more Get the opportunity to increase wafer output capacity early.” Peter Wen further explained.

For the performance expectations for the full year of 2022, ASML is also optimistic that it will maintain a year-on-year revenue growth of about 20%.

“2022 is going to be a good year. Compared to 2021, we’re expecting growth of about 20%. That’s a good number because you have to take into account that we’re also going to have some ‘fast shipping by the end of 2022’ ‘, causing some revenue to be shifted to 2023 recognition. We currently believe that approximately six EUV systems will be shipped in expedited shipments by the end of 2020. If the delayed recognition revenue is added, then 2022 revenue will increase by 25% year-on-year left or right,” said Peter Win.

55 EUV lithography machines to be shipped in 2022

Where has all my money gone? The 2021 resident consumption list tells you