Tunnel oxide passivated contact solar cell (Tunnel Oxide Passivated Contact solar cell, TOPCon) is a new type of passivated contact solar cell first proposed in 2013 by the Fraunhofer Institute for Solar Energy Research in Germany. Its battery structure is an N-type silicon substrate battery. A layer of ultra-thin silicon oxide is prepared on the back of the battery, and then a thin layer of doped silicon is deposited. The two together form a passivation contact structure, which effectively reduces surface recombination and metal contact. complex. According to ISFH calculations, the theoretical maximum efficiency of double-sided polysilicon passivated TOPCon cells is 28.7%, and is closest to the theoretical limit efficiency of crystalline silicon solar cells at 29.43%, with great potential for efficiency improvement. 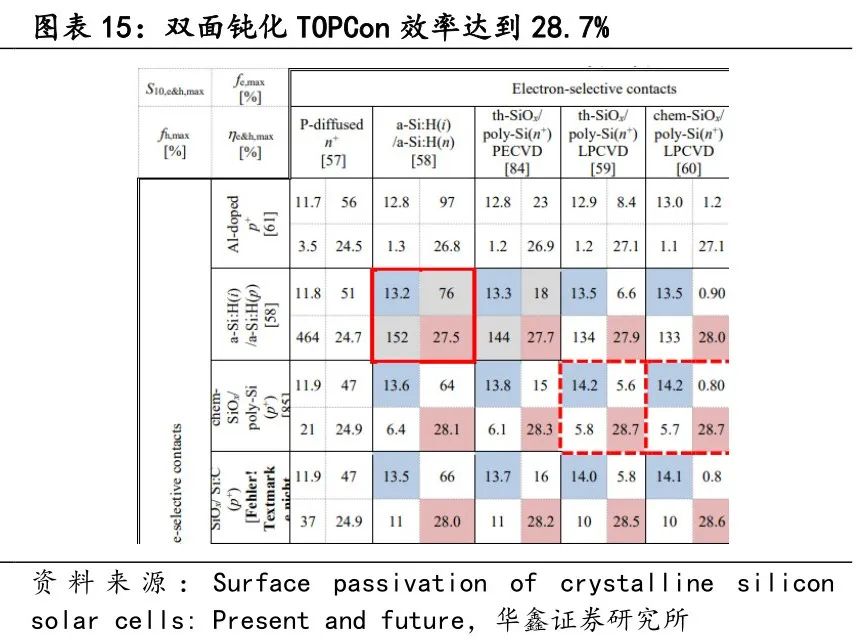 The production line has good compatibility and has the advantage of cost control.Compared with N-type TOPCon and P-type PERC, the difference in process route is mainly reflected in polysilicon production.Long andFor the preparation of the oxide layer, only boron expansion and thin film deposition equipment are added, while the upstream silicon material, silicon wafer and other heavy asset links do not involve equipment replacement, and the existing P-type PERC battery equipment process is retained and utilized to the greatest extent, compatible with The degree is as high as 70%. According to CPIA data, the investment cost of PERC production line equipment will drop to 194,000 yuan/MW in 2021, and the investment cost of TOPCon battery line equipment will be about 220,000 yuan/MW, which is slightly higher than that of PERC batteries. From the perspective of cost, the cost of silicon wafer and paste accounts for a relatively high cost of TOPCon, more than 80%. In the future, reducing silver paste materials and improving yield are effective ways to reduce costs.

TOPCon battery projects have been launched one after another, and orders for centralized power station projects have been obtained.In June, JinkoSolar’s “Jianshan Phase II 11GW high-efficiency battery and 15GW module intelligent production line project” started construction. The average efficiency target of battery mass production is more than 25%. It will continue to expand production capacity on the basis of the current 16GW N-type TOPCon battery and module production capacity. Trina Solar’s 8GW TOPCon battery project in Suqian, Jiangsu Province has also been officially launched in April. It is expected to be put into production in the second half of 2022. It is expected to ship 2-3GW throughout the year, with a yield rate of 97%, and a conversion efficiency of 24.7% by the end of the year.

According to statistics from ASIACHEM, since 2022, the domestic new construction and planned TOPCon battery production capacity will reach 224GW, bringing huge market opportunities for technology and equipment suppliers.

2. Leading enterprises deploy IBC and have outstanding advantages in the distributed market

The positive and negative electrodes of the IBC (interdigitated back contact, full back electrode contact crystalline silicon photovoltaic cell) are arranged on the backlight of the battery in an interdigitated manner, and the pn junction is also located on the back of the battery, which belongs to the back contact solar cell. There is no metal electrode on the front side to make the IBC battery have a higher short-circuit current Jsc, and the back side can allow wider metal grid lines to reduce the series resistance Rs and improve the fill factor FF; plus the front surface field and good passivation of the battery bring Open circuit voltage gain, IBC battery has many advantages in reducing optical loss, improving efficiency, improving battery performance, and beautiful appearance. 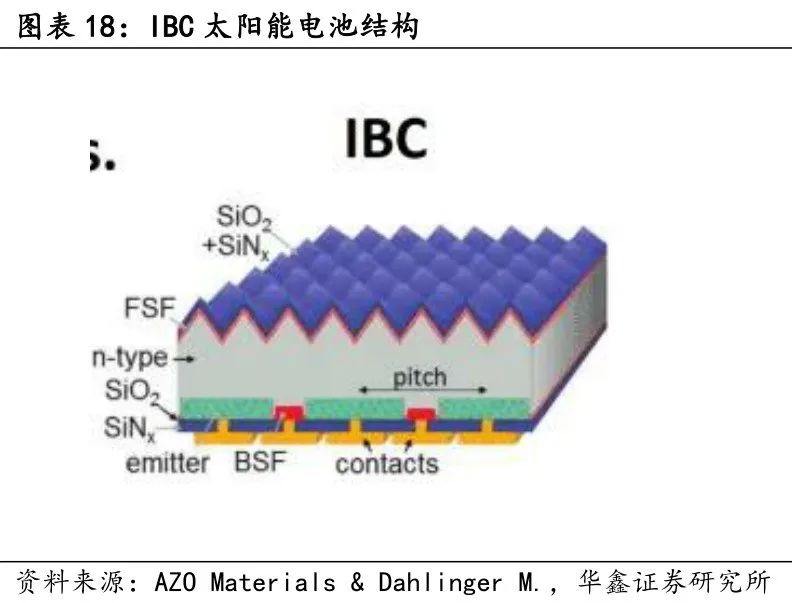 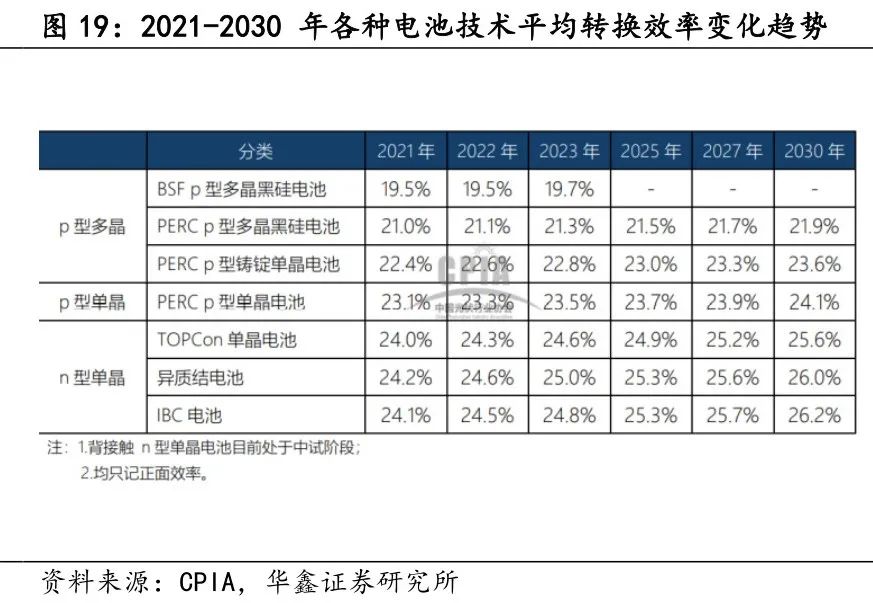 Good compatibility is conducive to the extension of next-generation technology.TBC battery is a combination of TOPcon and IBC. This battery structure combines the high short-circuit current of IBC and the excellent passivation contact characteristics of TOPCon, so it can obtain higher battery efficiency. HBC is a solar cell structure formed by combining HJT battery structure and IBC. This battery structure combines the advantages of high short-circuit current of IBC battery and high open-circuit voltage of HJT battery, so higher battery efficiency can be obtained.

P-type IBC has a better cost solution.The downside of IBC battery technology is that the manufacturing process is more expensive and complex. However, according to the patent “Preparation Method of a P-type IBC Battery” applied by Jiangsu Rituo Photovoltaic in March 2021, a P-type silicon wafer is used as the substrate, and boron doping is not required on the front and back, and no mask and Photolithography, with simple process steps, simplifies the complicated process of traditional IBC to 12 steps, and the production cost is significantly reduced. Considering that the application scenarios of P-type IBC products are mainly distributed overseas, the terminal has a high acceptance of the premium of high-performance products. Assuming that the premium can reach 0.2 yuan/W, which is about 3 cents/W, when the yield rate of P-type IBC batteries When it reaches 95%, the integrated profit of P-type IBC products can reach about 0.25 yuan/W. When the yield rate reaches 98%, the integrated profit can be further increased to 0.28 yuan/W. 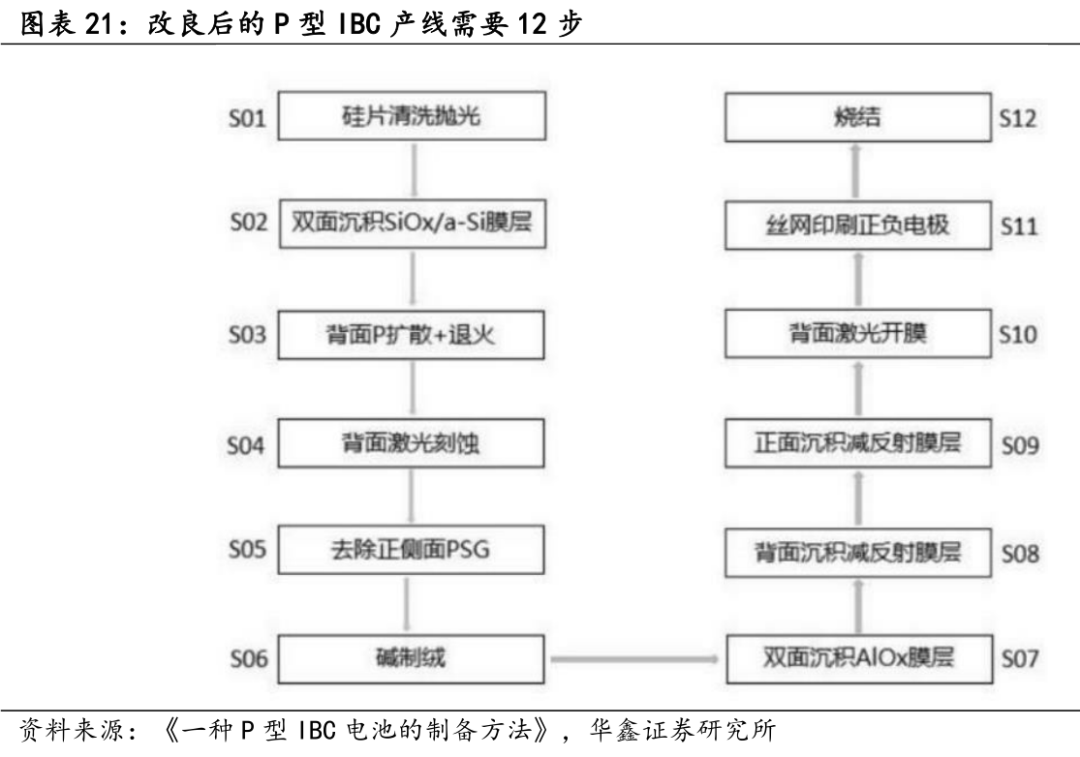 LONGi takes the lead in deploying HPBC batteries, and is expected to obtain excess returns in the high-end distributed market. LONGi HPBC battery uses IBC technology on the P-type technology route, and the substrate silicon wafer is still P-type silicon wafer. On November 4, 2022, LONGi Green Energy officially released the new module product Hi-MO6 to the outside world. At the same time, the company also announced the details of the HPBC battery equipped with the module. The full name of HPBC is hybrid passivation back contact battery. The current mass production efficiency has exceeded 25%, and the efficiency of the PRO version with superimposed hydrogen passivation technology has reached 25.3%. The company has launched a new module product Hi-MO6, which has an average gain of 10% compared with PERC products in the power generation simulation. . It is estimated that after the full production capacity of HPBC batteries in 2023, 20-25GW of products are expected to be shipped.

See also  Natural gas prices soared by 2 times, how to spend this winter in Germany_Heating_Energy_Firewood

HJT (intrinsic thin film heterojunction battery) is a special PN junction formed of amorphous silicon and crystalline silicon materials. It is an amorphous silicon thin film deposited on crystalline silicon. It is a type of N-type battery. It was first developed by Successfully developed by Sanyo Corporation of Japan in 1990, it has the advantages of high efficiency, low temperature coefficient, high double-sidedness and fewer process steps.

high duplex: The bifacial rate of HJT battery can reach more than 90% (up to 98%), which makes it have excellent performance when it is designed as a bifacial module.

few process steps: HJT battery only involves 5-7 steps in the manufacturing process, and the price of the equipment keeps decreasing. 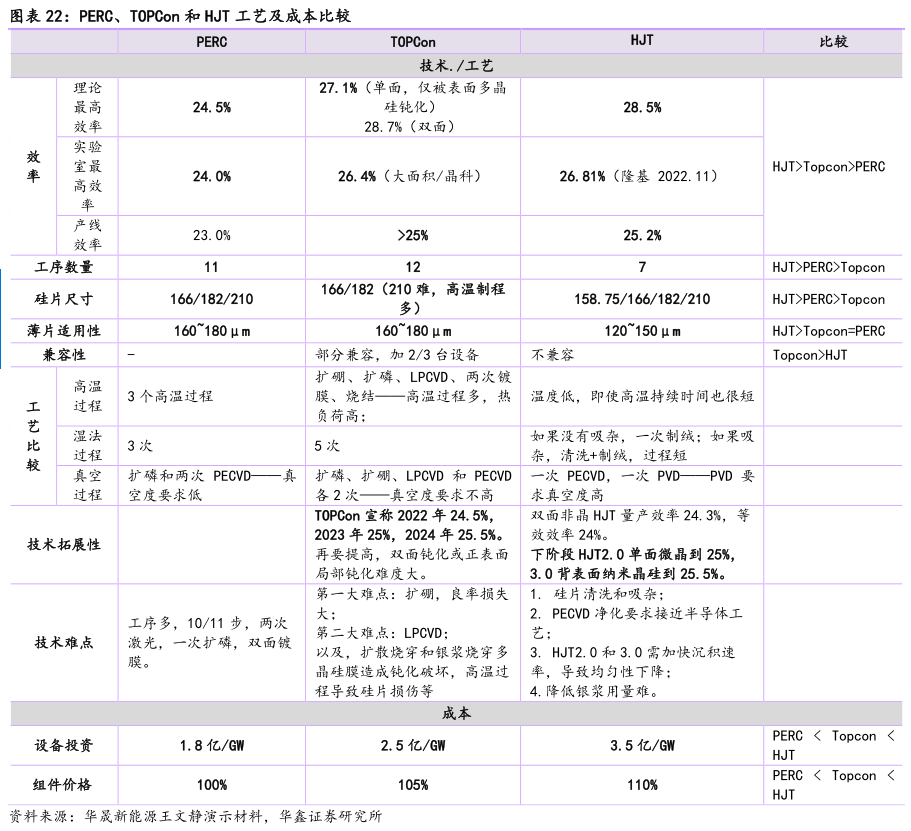 See also  Sales of 24 billion, one in two Italians can't resist the charm of used products

The cost reduction route is clear and has achieved results.From the perspective of non-silicon cost, under the silver grid wire technology, the cost per watt of mass-produced HJT is more than 0.2 yuan/watt higher than that of PERC, and the gap can be narrowed to less than 0.1 yuan/watt in the future. Part of it lies in the consumption of silver paste, the use of ITO, and the depreciation of the machine. Huasheng New Energy compared the costs of HJT batteries in January 2022 and April 2022 and found that the unit consumption of silver paste per watt decreased by 28%, the life of the screen plate resulted in a 72% cost reduction, cleaning process optimization and low-cost chemicals The introduction brought about a 31% reduction in chemical consumption, and increased target utilization resulted in a 15% reduction in target consumption. By the end of the year, non-silicon costs could be controlled at around 0.14 yuan/W, compared to 0.38 yuan/W recorded in January 2022. W, the decline rate is extremely significant.

The progress of mass production bidding has exceeded expectations, and many manufacturers have begun to deploy.Golden Glass announced in June that the company decided to invest in the construction of a 4.8GW high-efficiency heterojunction cell and module project, with a total investment of 4.191 billion yuan and a construction period of 18 months. According to the public account of Huasheng New Energy disclosed in May, Huasheng intends to carry out the construction of the third phase of the 4.8GW double-sided microcrystalline heterojunction smart factory project in Xuancheng. In 2023, Q1-Q3 will be put into production in two phases. In addition, in terms of equipment, Jiejia Weichuang said that in 2021, the company achieved a breakthrough in the entry of HJT equipment into the European market; Maiwei Co., Ltd. said that the company’s HJT equipment has successfully introduced microcrystalline technology, and at the same time, it is actively promoting cost reduction with manufacturers in all links of the industrial chain.

Walking to the Grassroots in the New Year, Dialogue with City Guardians | Wang Fengli: The “Flower of Sanitation” Blooming Beautiful Youth_Nanfang.com

Cassano, his wife Carolina Marcialis dresses with the...

Huang Guangyu is no longer the controlling shareholder...

Btp Italia against inflation: what you need to...

ChatGPT sets off a global capital frenzy: it...