TSMC warns: the semiconductor industry will be depressed next year | Leifeng.com

Leifeng.com(Public number: Leifeng.com)News, Taiwanese semiconductor maker TSMC announced its third-quarter earnings on Thursday. The financial report shows that in the third quarter ended September 30 this year, TSMC’s revenue in the third quarter of this year was NT$613.14 billion, equivalent to US$20.33 billion, and the net profit was NT$280.87 billion. 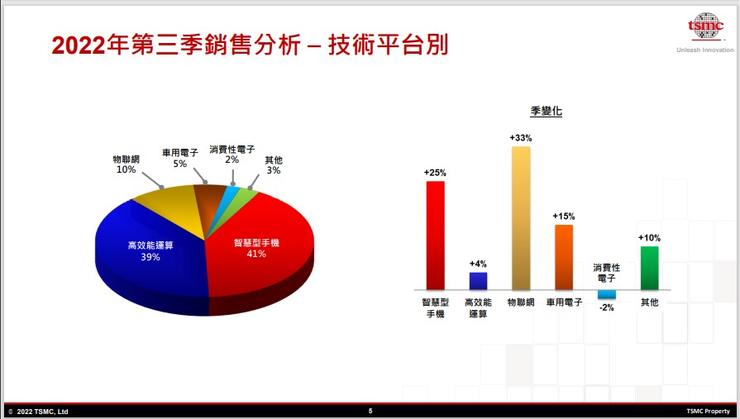 However, it can be seen that TSMC’s previous revenue structure model of “one superpower and multiple powerhouses” has changed, and high-performance computing has grown into an important business segment that goes hand in hand with smartphones.

Today, the shortage of cores that has lasted for about two years has ushered in a turnaround, and the semiconductor industry as a whole has entered a downward cycle. In the second quarter of this year, the financial reports of many giants fell short of expectations. Companies such as AMD and Micron have warned that supply and demand are changing. However, according to Reuters, some analysts said that because TSMC has a dominant position in the advanced process technology chip business, it has not been greatly affected by this change.

Huang Wende, vice president and chief financial officer of TSMC, also said after the release of the third-quarter earnings report that the demand in the end market is weakening, and customers are continuing to adjust their inventories, but TSMC’s leadership in the 5nm process has made its orders not affected by this trend too much. big impact.

TSMC’s financial results for the past two quarters also confirm this view.

In the second quarter, TSMC once achieved rapid growth against the market downturn. After the second quarter earnings report was issued, TSMC predicted that the revenue in the third quarter would be between $19.8 billion and $20.6 billion, with a gross profit margin of 57.5% to 59.5%. This is the most optimistic forecast made by TSMC in the past ten quarters.

Now it seems that TSMC’s optimism is not groundless. Whether it is the third quarter revenue of 20.33 billion US dollars or the 60.4% profit margin, it has reached or even exceeded the previous optimistic forecast.

But in the forecast released with this quarter’s earnings report, TSMC said it would be difficult to maintain such growth in the fourth quarter.

Huang Wende said that in the third quarter, the market demand for TSMC’s industry-leading 5nm process chips was strong, but the demand in the end market was weakening, and customers were continuing to adjust their inventories.

Taken together, TSMC forecasts that fourth-quarter results will be roughly in line with the current quarter: revenue will be $19.9 billion to $20.7 billion, and gross profit margins will be between 59.5% and 61.5%.

See also  Kuaishou executives interpret the Q3 financial report: video advertising is favored, and the number of employees is not expected to increase significantly next year

In addition, TSMC still announced a 10% reduction in its 2022 investment budget, and predicted that due to inflation and rising costs, the chip industry, including TSMC, will usher in a recession next year, and TSMC will be “more cautious” about future demand performance. .

Wei Zhejia, CEO of TSMC, said after the earnings report: “We expect that the semiconductor industry may decline in 2023, and TSMC will not be spared.”

In addition, the recent further control measures by the United States on the Chinese chip industry will also affect TSMC to a certain extent. Wei Zhejia said that the scope of the new regulations is very high-end manufacturing processes, mainly used for artificial intelligence or supercomputing. Preliminary analysis believes that the impact on TSMC is “limited and controllable”, and TSMC includes factories in Nanjing. The business has been authorized for one year in the United States.