From the day Xiaomi announced its cooperation with Leica, Mr. Lei changed his body on Weibo and became a photographic equipment party who likes Leica. Today, he finally showed off his favorite camera: Xiaomi Mi 12S Ultra.

Before the official release of new products, Xiaomi first announced a new concept of Xiaomi’s imaging strategy upgrade: “Beyond the human eye and perceive the heart”. Not only has the composite sensor, lens, and optical motor system been fully upgraded, but also the image processing algorithm has been upgraded, and the Mi Image Brain, which was first released on the Mi 12 series, has been upgraded to 2.0. At the same time, Xiaomi also announced that it will share the progress of mobile imaging with the whole industry and open the ecosystem. The protagonists of this conference, the three new models of the Xiaomi 12S series,It is the spearhead of the image strategy upgrade。 Briefly go through the parameters: 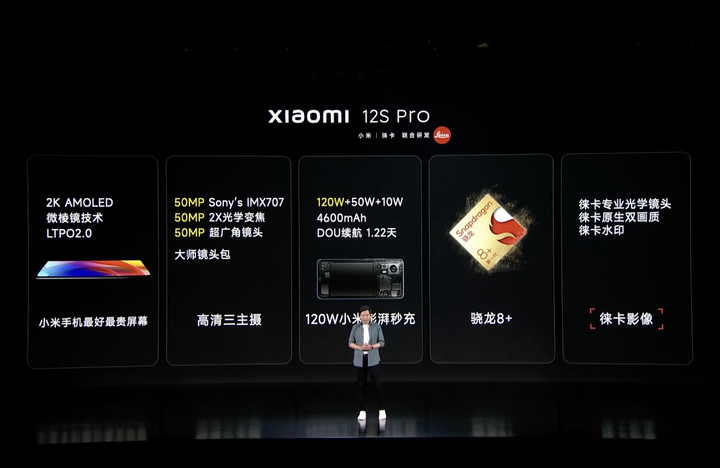 In terms of color, in addition to the black, purple and wild green (plain leather) of the Xiaomi Mi 12 series, white is also added. Looking at my white keyboard, white computer, and white headphones, I suddenly felt that it was time to change to a new phone.

As the first mobile phone equipped with a new generation of Snapdragon 8+, Mr. Lei was also full of praise for this chip at the press conference. According to Xiaomi’s test, the Snapdragon 8+ using TSMC’s 4nm process has about 30% improvement in CPU and GPU, and the AnTuTu running score of Xiaomi 12S Pro exceeds 110W. Of course, “the performance that the user can use is the real performance.” Therefore, Xiaomi, which benchmarks the iPhone in an all-round way, uses the iPhone 13 Pro Max as the benchmark to adjust in daily areas such as Weibo, watching short videos, and chatting on WeChat. I thought that benchmarking the iPhone was a slogan, but I didn’t expect it to be a real action. Mr. Lei said at the press conference:

With today’s flagship phones, it’s impossible not to get hot at all. However, we can do better than the iPhone.

Going back to the Xiaomi Mi 12S series, in order to restore the original Leica style on the mobile phone, Xiaomi has made the following attempts.

See also  Summary of Apple’s Explosive Field Conference: AirPods 3 is late, but the new MacBook Pro is too strong to have friends, with only one "disadvantage." Compared with the 12S, the imaging system of the Xiaomi Mi 12S Pro has been upgraded, both of which are 50 million pixels: 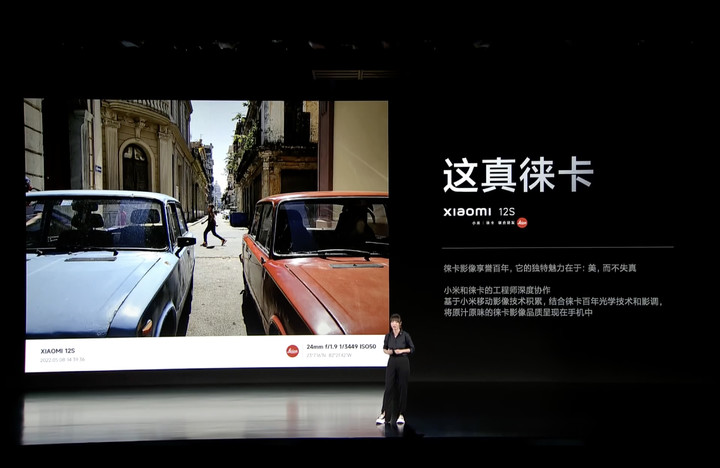 We also brought you a hands-on video of Xiaomi 12S Pro for the first time, let’s take a look!

After reading the introduction of Xiaomi Mi 12S Ultra, as a rice fan, I extended my hand to snap up the Xiaomi Mi 11 Ultra, and wanted to contribute to Mr. Lei’s high-end dream once again. In fact, before the press conference, the Xiaomi Mi 12S Ultra has already been exposed from the configuration to the appearance, from the official to the “foreign media”. Let’s take a look at the key parameters first: At the end of the image is the Leica.

Mr. Lei sighed so much at the press conference, and the biggest upgrade of Xiaomi Mi 12S Ultra is also the imaging system jointly developed with Leica.Don’t judge it with an everyday phone because it’s made for professional photography enthusiasts. Xiaomi Mi 12S Ultra has a new design “built for images”: The Xiaomi Mi 12S Ultra is equipped with the 1-inch outsole IMX 989 jointly developed with Sony. Mr. Lei said that this is the “ceiling of mobile phone camera sensors”; the 8P aspherical high lens film comprehensively improves the shooting experience; in order to record more beautiful scenery, To reduce glare, all lenses are fully inked and anti-glare coated. Cycloolefin lenses and IR filters are also used.

Each parameter tells us that,It is the strongest video system of Android。 In addition to the “most sincere half-generation upgrade” Snapdragon 8+ performance blessing, Xiaomi has also made great efforts in heat dissipation. With reference to the way plant leaf veins absorb water, Xiaomi Mi 12S Ultra has newly designed the leaf vein cold pump cooling system. It is said that the thermal conductivity of a single unit has been increased by 100%. This time, Xiaomi Mi 12S Ultra also added a self-developed technology included in the UFS 4.0 specification: hardware-level defragmentation (File-based Optimization, FBO), which divides the fragmented files into whole ones at the bottom layer, and users do not need to perform operations. You can enjoy a smooth system.

The FBO function has been included in the official UFS 4.0 standard by the Solid State Technology Association (JEDEC). After mass production of UFS 4.0, it will be open to the entire industry. Before mass production, only Xiaomi Mi 12S Ultra can enjoy this function.

In terms of battery life, Xiaomi’s battery management chip Surging G1 was officially released, which is used to monitor the health of mobile phone batteries throughout the cycle, intelligently adjust charge and discharge performance, and extend battery life and battery life. The fast charging chip Surging P1 is also not absent. The combination of the two chips allows Xiaomi The 12S Ultra has 67W wired, 50W wireless, and 10W reverse charging speeds. Mr. Lei announced at the press conference that the Xiaomi Mi 12S Ultra had a battery life of 1.24 days in internal tests (1.04 days for the Xiaomi Mi 11 Ultra), which not only satisfies daily use, but also reserves extra power for shooting. However, when the Xiaomi Mi 9 was released, Mr. Lei also said that “use it properly for a day”, friends who are not in a hurry to change the phone, or wait for our follow-up long-term experience sharing. How should I put it, as a game party who does not have high requirements for taking pictures, I feel that this Mi 12 Pro Dimensity Edition is more suitable for me. In terms of appearance, Xiaomi Mi Band 7 Pro has a 1.64-inch AMOLED full color screen, and the display area is 50% larger than that of Xiaomi Mi Band 7. Xiaomi leaves the choice of the screen to the user: more content or larger font, as you like.

Compared with the “rice grains” that were always black in the previous generation, this time the Xiaomi Mi Band 7 Pro also has black and white two-color, with a metal texture (texture) middle frame, the fashion has indeed improved a lot. In terms of performance, relying on the improvement of Nor falsh storage space, Xiaomi Mi Band 7 Pro has lower latency, smoother operation, global dynamic effects, and high-frame full-color. With the 7Pro of the ambient light sensor, the viewing experience is guaranteed, and the daily battery life is also guaranteed. The most important health aspect, in addition to 117 sports modes, Xiaomi Mi Band 7 Pro can finally be positioned independently by satellite, no longer need to open the sports record and wait for the mobile phone to search for stars. The rest of the functions do not seem to be much different from the Mi Band 7, and we can look forward to our follow-up experience. I have used every generation of Xiaomi bracelets, except for the affordable price,Small and inconspicuous wearing and long battery lifeis why I choose it. While this Xiaomi Mi Band 7 Pro has a larger screen and more functions, it will definitely compromise the battery life and wearing experience.

So, I also want to ask the old users of Xiaomi Mi Band: What is the reason for you to choose Mi Band? 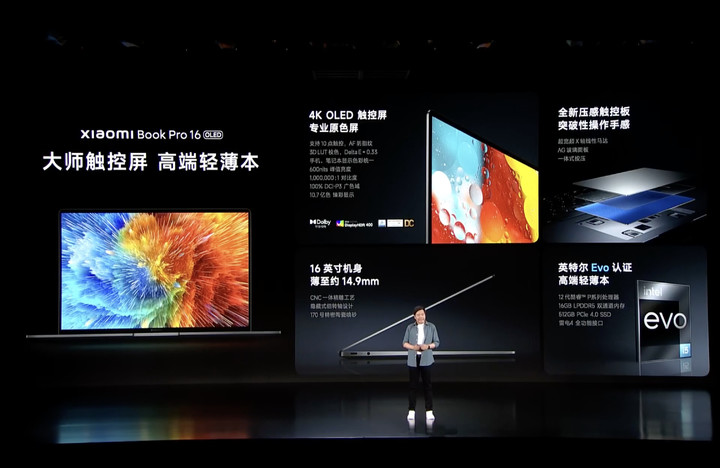 And the point that caught my attention the most was the new pressure-sensitive touchpad developed by Xiaomi. Xiaomi said that this touchpad allows users to “lose the external mouse”, but good hardware is just the beginning. MacBook has been using Force Touch for almost 7 years, and many third-party apps have also been adapted. Although Windows provides Precision touch drivers, there are not many really adapted. Aifaner reader he11oboy shared his views on the Windows touchpad:

The hardware is only the foundation, whether it is good to use or not depends on the actual experience.

Xiaomi also launched a new flagship router at the conference: Xiaomi HomeWiFi. This is a professional tri-band mesh router for large apartments, supports automatic networking, and can cover a large apartment of 150 square meters. If you want to use it in the enterprise, you can buy 10 units for interconnection, covering an area of ​​1500 square meters directly. There are a lot of smart functions such as one-button smooth chain, NFC touch-to-connect, etc. Summary: Is the high-end road stable this time?

Of all the products launched at this conference, which one is your favorite? On March 29, 2021, Xiaomi released 3 mobile phones, 1 smart bracelet, 1 router, and some accessories in two hours. When Mr. Lei said that the Xiaomi Mi 12S Ultra was going to become the “Light of Android”, I wonder if he would recall the year when the “Light of Android” Xiaomi 11 Ultra passed.

On the whole, the Xiaomi Mi 12S series is full of performance, and it is full of images together with Leica; Xiaomi Notebook Pro 2022, with the blessing of Intel’s 12th generation chip and a new touch panel, will naturally improve the experience; Xiaomi Mi Band 7 Pro The screen area has been increased, leaving enough room for future upgrades; Xiaomi routers have also crossed the threshold of high-end routing. All look pretty good. So, can Xiaomi’s high-end road succeed? This question will make my mind drift to 2016, the night when Xiaomi MIX was released. The Xiaomi Mi 12S series shows us the stable performance of Xiaomi’s high-end line step by step, but to achieve the high-end road, Xiaomi is still one time away from the general cheers of the first-generation MIX release.

Will this cheer come on August 16, the 11th anniversary of the release of Xiaomi’s mobile phone?