Home Business Yuanguang | Dismantling of the financial report of Station B: Q4 net loss narrowed month-on-month, will it be the inflection point of Station B’s profitability? _users_year-over-year growth_non-GAAP
Business

Yuanguang | Dismantling of the financial report of Station B: Q4 net loss narrowed month-on-month, will it be the inflection point of Station B’s profitability? _users_year-over-year growth_non-GAAP

Original title: Yuanguang | Dismantling of the financial report of station B: Q4 net loss narrowed month-on-month, will it be the inflection point of station B’s profitability?

On the evening of March 3, Beijing time, Bilibili (hereinafter referred to as “Bilibili”) announced its unaudited financial reports for the fourth quarter and full year ended December 31, 2021. According to the financial report, the total revenue of Station B in fiscal 2021 will reach 19.38 billion yuan, a year-on-year increase of 62%. Among them, revenue in the fourth quarter increased by 51% year-on-year to 5.78 billion yuan.

However, station B still lost money. The financial report showed that the net loss of station B in the fourth quarter was 2.09 billion yuan, an increase of 147% year-on-year and a decrease of 22% month-on-month, showing a narrowing trend.

In the earnings conference call, Fan Xin, Chief Financial Officer of Station B, said: In 2022, Station B is confident that, on the premise of maintaining healthy user growth, by increasing the monetization rate of a single MAU and controlling operating expenses, it will start the full-year non-profit in 2022. -GAAP (non-GAAP financial measure) operating loss ratio narrowed year-on-year, with a mid-term target of non-GAAP breakeven in 2024.

In the financial report, Station B made an outlook for the revenue in the first quarter of 2022, which is expected to reach 5.3 billion to 5.5 billion yuan.

Growth and profitability are difficult 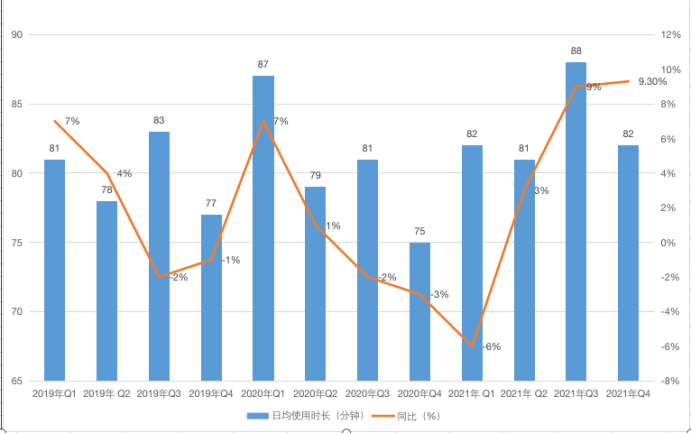 As a content interest community, to maintain user stickiness and growth, it is necessary to increase investment in content. According to Qichacha, there will be about 30 investment events in Station B in 2021, including the wholly-owned acquisition of You Yaoqi and Dream Animation.

Regarding the 600 million acquisition of a demonic original comic platform at Station B, many people questioned that it was “not worth it”. Because the demon spirit at that time has been “delayed” by Aofei Entertainment for 6 years, although it has popular IPs such as “100,000 Cold Jokes” and “Soul Street”, due to the lack of operational capabilities, before being acquired by station B, there was a demon spirit. It has lost millions of dollars year after year.

On the second day after the public acquisition, Station B held the “2021-2022 Guochuang Animation Works Conference”, and released 49 films including “Three-Body Problem”, “Five Elements in Wushan, Xichuan Magic Purple Forest”, and “Blessings of Heaven Officials 2”. Animation, and announced that there will be continuous new adaptation and development of 13 comic works such as “Street of the Soul”, “One Hundred Thousand Bad Jokes” and “Terminal” under the banner of Yaoqi.

In addition to the layout of animation, in the past three years, station B has also produced 18 variety shows, of which “Dancing Millennium”, “90 Dating Agency” and “Summer of the Eaves” will all be produced and broadcast in 2021. In November last year, Station B held the first documentary press conference, announcing that 21 documentaries would be launched.

These investments are necessary at least in Station B’s view. However, the investment in OGV content may also increase losses due to the high cost.

This statement is to a certain extent to maintain market confidence. Due to long-term losses, since March last year, the stock price of Station B has begun to fluctuate. As of yesterday’s close, the US stock price has dropped from a high of more than $100 to $30.16 per share.

The game business relegated to the third place, and advertising has become a new growth engine

The proportion of game revenue of station B has dropped from over 80% at the time of listing to 22% today, and its contribution rate to revenue has dropped to third. This is the result of year-by-year adjustments at station B. With the tightening of the game version number in the big environment, it is also a wise move to reduce the reliance on the game business.

Now it seems that these measures are worthwhile. In Q4 2021, the game business revenue of station B will increase by 15% year-on-year.

As for why it attaches so much importance to games, according to Chen Rui, “Bilibili does not use it as a means of monetization when making games, but when the content of the game is done well, it will naturally be able to be commercialized.” He gave an example. For example, games have always been the top three categories in the video field, and have always been the number one category in the live broadcast field.

That is to say, games are an important content supplement and source of inspiration for the video ecosystem of Station B.

At the financial report meeting, Chen Rui reiterated the role of breaking the circle, “As users break through the circle, more and more industry advertisers will find us. For example, it used to be games, 3C, and later became food and beverages, and became Beauty and beauty, in the last year and this year, industries like automobiles will also become key advertisers. Last year, in Q4, automobiles became the top five advertiser industries at station B, which is closely related to the process of users breaking the circle. “

However, as an interest community, the scale of advertisements is limited. At present, the Ad load (ad load rate) of Station B is about 5%. In February last year, Chen Rui said that Ad load would not be increased in 2021. In the future, Bilibili still needs to strike a balance between user experience and advertising scale.Return to Sohu, see more

Is the rally over?Gold faces the risk of...

Circular economy, from cow to pump. Here is...

Layoffs are raining down on Wall Street, but...

Briefcases, Flat Tax and the cleanup on Pos:...