Home Business Zhao Wei and his wife were sued by well-known financial institutions, and the shares of many companies under the former’s name were frozen-People-cnBeta.COM
Business

Zhao Wei and his wife were sued by well-known financial institutions, and the shares of many companies under the former’s name were frozen-People-cnBeta.COM

According to the official website, Minsheng Trust is an investment institution under Oceanwide Group, formerly known as China Tourism International Trust and Investment Co., Ltd. According to Qicha APP, the company has a registered capital of 7 billion yuan and the controlling shareholder is Wuhan Central Business District Co., Ltd.

In addition, it is worth mentioning that Qichacha APP showed that on June 11 this year, Minsheng Trust’s case against Zhao Wei was heard in the No. 45 Court of the Beijing Second Intermediate People’s Court. The defendants in the case were Zhao Wei and Hebao Entertainment Group Co., Ltd., and the cause of the case was also a guarantee contract dispute. In the case of judicial assistance information, Zhao Wei’s 4.15% equity in Hebao Entertainment was frozen, involving a capital of 5 million yuan. 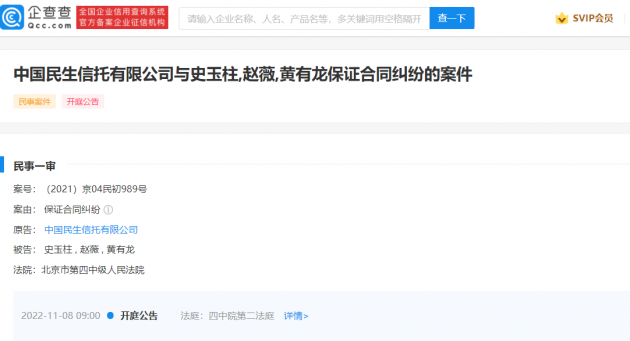 In addition, since April this year, the equity of many companies under Zhao Wei’s name has been frozen:

On April 28, in Beijing Prince Culture Communication Co., Ltd., Zhao Wei held 70% of the shares and served as a supervisor, and the equity was 2.1 million yuan frozen;

On April 30, Wuhu Dongrunfa Investment Co., Ltd., Zhao Wei held 90% of the shares, and the frozen shares were 9 million yuan.

According to the Qicha APP, there are currently 14 affiliated companies of Zhao Wei, of which 8 are still in operation and 6 are suspended and cancelled.

Vice Foreign Minister Le Yucheng talks about the so-called “democracy summit”: inciting ideological confrontation is a distortion and blasphemy of democracy — Ministry of Foreign Affairs of the People’s Republic of China

The increase in employment of college graduates in...

Intermonte is listed on the AIM of Piazza...

It is reported that the M1X MacBook Pro...

Helbiz announces an investment of 30 million: the...