Home Entertainment After the performance of “Chinese Doctor,” Yuan Quan respects the Chinese doctor even more, frankly: This is the most inaccurate time in my career as an actor-News Center-Nanhai.com
Entertainment

After the performance of “Chinese Doctor,” Yuan Quan respects the Chinese doctor even more, frankly: This is the most inaccurate time in my career as an actor-News Center-Nanhai.com

Reflecting that the Wuhan anti-epidemic movie “Chinese Doctor” is currently being screened, actor Yuan Quan plays Wen Ting, director of the ICU (Intensive Care Unit) of Wuhan Jinyintan Hospital in the film. Her prototype is Zhang Jixian, director of the Department of Respiratory and Critical Care Medicine, Hubei Provincial Hospital of Integrated Traditional Chinese and Western Medicine . Wen Ting has a calm and resolute personality. Not only does she have superb medical skills in her business, she also has good organizational and coordination skills. Under her leadership, the surgical standard of the intensive care unit has been continuously improved and has become the backbone of the fight against the new crown epidemic. For Yuan Quan himself, this is also a very special performance, “It can be said that this is the most unpredictable time in my career as an actor.”

Yuan Quan is with the prototype of the characters played in the play.

This is a play that cannot be rejected

In 2019, Yuan Quan and Zhang Hanyu played the crew chief Bi Nan and the captain Liu Changjian respectively in the “Chinese Captain” directed by Liu Weiqiang. After the film was released, it achieved great box office and word-of-mouth success. Upon hearing the news that “Chinese Doctor” was about to start filming, Yuan Quan took the initiative to ask for the battle. In her opinion, “This is a film that is impossible to reject. Its value exceeds the film itself.” At that time, even the script was not written. come out.

When the Wuhan epidemic broke out last year, Yuan Quan was in Beijing, but she had classmates, friends, and teachers in Wuhan. Her heart was always concerned, “I receive information from Hubei from the news or various channels every day. I think during that period of time. Everyone spent it together.”

As a doctor, Wen Ting has a lot of scenes of performing operations in the film. Before the filming started, the crew specially invited medical staff to eat and live with the crew for 148 days to provide training to the actors and answer medical questions and technical difficulties. Yuan Quan found that they have a particularly firm strength, particularly optimistic, and particularly simple. “They make you believe in the power of professionalism and do their best to arrange every patient they receive. This is professionalism.”

In addition to the technique, Yuan Quan will also ask the doctors, “What kind of strength will support you to persevere? When a problem occurs during the operation, how will you feel, how will you seek help, and finally the operation will be successfully completed?” In her opinion, being a doctor requires strong psychological support and self-cultivation.

In the past, medical film and television works often gave the audience a feeling that everything was under the control of the doctor. Although they looked handsome, they were not true. In this filming of “Chinese Doctor”, Yuan Quan did not have such a sense of control. She even felt in a trance many times. “The more you understand, the more you feel that it is uncontrollable. During the entire filming process, you will feel that these doctors are always in control. Every step is like walking on thin ice. Their kind of handsomeness is a presentation of a very professional sense. I tried to get close throughout the whole scene, but it was too difficult.”

Although it is an acting, each operation is performed in strict accordance with the actual surgical procedures. The most difficult thing is to give the patient ECMO (Extracorporeal Membrane Oxygenation) and intubate the patient. “Many operations are performed in emergencies. It is necessary to make quick judgments and determine what to do for the patient to save lives. I sometimes think that every doctor’s judgment is related to the safety of the patient. They are It takes so much professionalism, experience and confidence to persevere.”

Yuan Quan remembers that he must put on protective clothing before shooting almost every day, and sometimes he can’t take it off during rest. “After changing clothes, people will feel comfortable right away. The feeling of being comfortable may not be right, so they will continue to wear them. “The longest time, Yuan Quan wore protective clothing for 8 hours without taking off, and she was completely unaware of it. She said: “Wearing a protective suit to film a movie, the inner feeling is really different, it’s like a state of fighting a war robe.”

One day before the shooting, Yuan Quan felt a little pain in the ligaments of one of his legs, but at the beginning of the shooting, I couldn’t feel it at all. When I finished shooting in the morning and rested for an hour, the pain came back again, “I’m thinking The same is true for doctors. They don’t have the time and energy to pay attention to their body when performing surgery. The exhaustion seems to have disappeared. Some doctors have not even closed their eyes for 36 hours, and deal with one case after another, just to be reckless. a feeling of.”

After filming “Chinese Captain” and “Chinese Doctor”, she was full of awe of the professions in different fields. “You will think that every profession is sacred. This may be a particularly rare experience as an actor.” 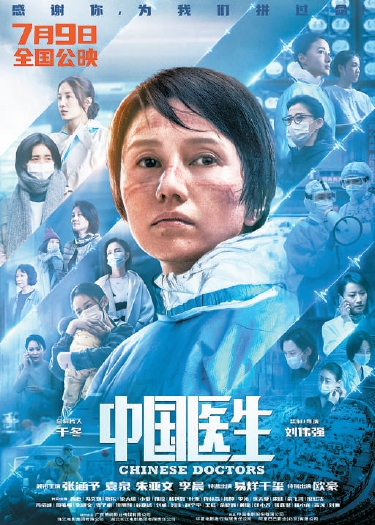 Wearing a mask with eyes becomes the largest window

From the first day in the group, Yuan Quan decided to put aside his previous performance experience, “because it is a real thing that happened, we walked into the hospital and saw the state of these medical staff. It was not performance-oriented. “For example, in makeup, you can’t get your hair too neat, “because Wenting’s energy is all about saving people.” The actors wore masks almost all the way, and there were many clear marks on their faces. Sometimes the protective clothing is worn for too long, and the whole body is soaked. “Although it is definitely not in their state compared with the medical staff at the time, but I can also feel that it seems to be closer to them when I am exhausted.”

“In this play, any comfort is not compatible with the role.” Yuan Quan felt that wearing a mask while acting, his eyes became the biggest window of performance. In the eyes of others, her big eyes are an advantage, but she herself has to control her emotions more. “The profession of a doctor does not allow too many personal emotions to be expressed. For me, anti-control is actually A difficult problem.” As for how to keep emotions from flooding, the answer is: Don’t panic. “I have been telling myself when shooting this scene: Keep your breath, not panic, but it’s impossible not to panic.”

Although the actors have tried their best, Yuan Quan also admitted that it is impossible to restore the true state of the doctors. “You can only do your best to get close. As a medical staff, you need to have some psychological qualities that ordinary people don’t have. This is the case. It may also be something that I have always wanted to experience during the entire filming, but I feel that it is far away. I think Wen Ting’s role is to stick to her post during the epidemic and do her best to do what she should do. thing.”

After the filming of “Chinese Doctor”, Yuan Quan respected the doctors a little bit more, “A thousand words in one sentence, they are really great!” Reporter Wang Jinyue

Original title: After the performance of “Chinese Doctor” I respect the Chinese doctor Yuan Quan more frankly: This is the most insecure time in my career as an actor

Five stories, feel the temperature of the times,...

After adding so many fierce materials, the treasure...