Young people compete in performances, and the drama is full of power

The Ninth Wuzhen Theater Festival Youth CompetitionCreate propositions with the three elements of “remote control, wine bottle, and blank space”. 18 youth competition works, 84 young dramatists stood out from 541 entries and were successfully shortlisted. They performed three rounds of performances at the Wuzhen Bengwan Theater, and competed fiercely for the small town award. After careful selection by the jury of Wuzhen Theater Festival, “Modern Cave” won the Small Town Award-Special Attention Award, and the Small Town Award-Best Drama Award was jointly won by “Moonlight” and “Very Good”.

At the moment of “harvest” harvest, the power of youth demonstrated the tireless vitality and creativity of Chinese drama. As a diverse and inclusive international cultural exchange platform, Wuzhen Theater Festival actively embraces young people and provides young dramatists with a platform for free creation and opportunities for learning and communication. Countless young dramatists set sail from Wuzhen Theater Festival to perform on the Chinese theater stage Write their own chapters.

The 9th Wuzhen Theater Festival invited 22 excellent domestic plays and 7 plays from around the world to be screened.Set off to welcome the morning glow, turn around on the starlight, the golden section, free fall, lonely prime numbers, gravitation, quantum entanglement, and perpetual motion machines together form a specially invited repertoire of harvest and happiness, adventure and creation this year, presenting a richness in different perspectives emotion. In ten days, 61 performances and 10 screenings were staged in 8 theaters in turn.

In the Wuzhen Grand Theater, three literary classics sent affectionate calls across time and space to the audience. “The Seventh Day” returned from Avignon with great honors and ushered in its premiere in China. Two generations of pioneer representatives in the field of literature and drama met in Wuzhen, and together with the audience, they explored life topics of memories and regrets; The Sorghum Family” composes a weeping human epic amidst the elegiac songs; “The Cherry Orchard” breaks the tradition and creates an emotional space where the concrete and the abstract overlap with a brand-new body language and visual aesthetics. The endless applause of the audience is still echoing in the theater.

In the multi-function hall of Wuzhen Grand Theater, the three plays had a sincere dialogue with human nature. In just one hour, “Report of an Ape” and “Xiao Ke” lead the audience into the “public loneliness” of human beings, using the stories of an ape and a dancer respectively to tell the story of individual life’s pursuit of freedom and persistence. explore. “The Wasteland of Dogs” integrates literature and technology into the theater, allowing the audience to witness the style and changes of history in a complete AI space.

In the prologue hall of Wuzhen Grand Theater, the power of women and the power of men are highlighted. “Tanning” uses “wine” as an introduction, and the intimate relationship of the three girls surfaced. “Dance” uses “wu” to “dance”, and the traditional Chinese artistic expression is reconnected in the theater.

Intertwined with the questioning of human nature, the story of love is staged on the 3rd of the Exhibition. Walking into “Thirteen Corner Relationships”, Lai Shengchuan brought different aspects of marriage and love to the audience, and the laughter contained thoughts about life. “The Master and Margarita” made its new premiere with a different ending. In the modern theater of the 21st century, the audience witnessed the courage and awe in the story of a century ago.

Last year’s “The Passing of Spring” is still fresh in people’s memory. In this year’s online theater, Zhu Hongxuan came again with “A Tale of Two Pings”. Xiao Yanqiu from “Tsing Yi”, who came to the moon, gave the audience spiritual comfort in Wang Yabin’s magnificent dance. Overthrowing the shackles of the past, Wang Zichuan opened the window of the audience’s soul with “Jacobi and the Thunder Warhead”, injecting a surge of life force. Chen Zihao brought “29” to move with his heart in the Huanhu Theater, and danced and danced. Together, the audience and the dancers climbed the mountain of time and reached the other side of life. Huang Xiangli played five roles in the fourth one-man show “Fox Angel”. In the real stage world, she brought the audience a mysterious and seductive hazy experience. Wang Anbang’s “Fairy Tales on Earth” reveals the essence and reality of the world in vivid fairy tales. Liu Xiaoyi’s “Dark Blue” explores the unknown tolerance and charm in the unfathomable sea. Duan Fei’s “Li Shutong” clears away the clouds and mists of life in a man’s ups and downs full of joys and sorrows. Entering the National Music Theater, the audience enters a dream among the three worlds.

In the quaint Xiushuilang Theater Garden, the audience feels the individual’s struggle and pursuit of self. When only “The Last Dance” is left in life, Pan Xiaonan will cross the arc of death with her body. When the only “Lucky Audience” in the theater stepped onto the stage, Hong Tianyi wanted to present the most perfect performance when the curtain opened. When the people holding “Peach Blossom Fan” are in the cracks of history, Xiao Jing wants to write about the deepest destiny entanglement between the individual and the country.

The stage is set up on the ground, the sky is the curtain, rain or shine, and the scenery is changed step by step. The performances bring the audience an artistic audio-visual feast and start a magical journey on the street. Wooden House is full of drums, moving dances, and cheers everywhere; the 42° North Latitude Art Workshop is inspired by the twenty-four solar terms in China, and carefully crafts costumes that imply the “heavy snow” of the solar terms; Wooden Bird Elephant Art Troupe The artistic visual show and impromptu meeting with the theme of steampunk has attracted the love of audiences of all ages… In Wuzhen, good things happen anytime, anywhere.

Professional dialogue, face to face with the master

Meet famous experts in small towns to give lectures,Conversations, workshops and readingsand other forms to show the infinite charm of drama art, for drama lovers to absorb artistic nutrients outside the theater and discover the joy of self-growth.

The workshops of Lai Shengchuan, Wang Yuanyuan, and Zhang Wu, three instructors, share experience from multiple perspectives such as director construction, body emotion, and stage design, leading drama lovers into the professional palace, and comprehending the thoughts of drama art in the dual thinking of theory and practice Intrinsic and aesthetic methods.

The theater market is an extension of a better life. This year, the Wuzhen Theater Festival opened up the venue, and used the Beizha Silk Factory and the Beizha Granary together as the venue for the theater market. From early morning to midnight, it gathers all senses of vision, hearing, smell, taste, and touch to mobilize the senses in all directions, music, exhibitions , Movies, trendy art, installations, reading, food and other activities are all available and colorful.

There are more than 2,000 excellent books in the town library for people to read. The Daydream Reading Club and Midnight Reading Club will use their auditory perception to perceive drama and growth, leading every drama lover to enjoy a poetic paradise of words. The trendy food market, the ingenious combination of human fireworks and artistic aesthetics, eating, drinking, frisbee, camping, trendy play, handicrafts, cultural creation… all your imagination about the lifestyle can be satisfied.

The fruitful harvest, the wonderful interpretation of the young artists of Douyin, has multiple expressions of the theme “abundance”.Douyin WenchuangFrom the perspective of youth, with “apple” as a symbol, physical cultural and creative products are precipitated.

At the Xinshijing Artisan Bazaar, meet intangible cultural heritage inheritors from all over the country looking for ingenuity, connect ancient and modern memories, and carry Chinese civilization. Many intangible cultural heritage performances such as calligraphy, Chinese music, Suzhou embroidery, tooth-playing, and juggling are gathered together.

Since the Wuzhen Theater Festival was held nine years ago, it was the first time that the sky was full of snow. The smoky Xishi River and patches of snow awakened Wuzhen. The power of drama was extremely strong in the south of the Yangtze River. old friend. This snow belongs to the drama, the audience, and this romantic two-way rush. 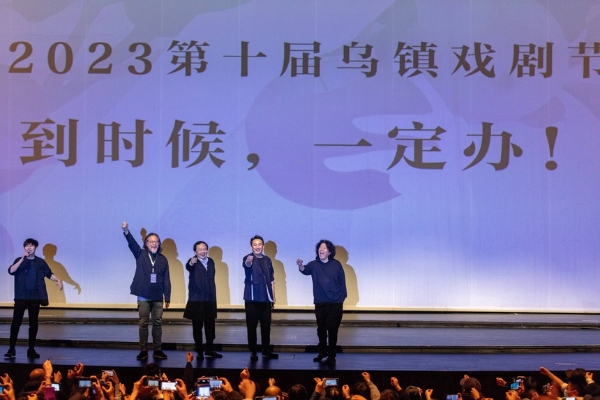 Standing together through thick and thin with many theater lovers, Wuzhen Theater Festival has the honor of accompanying Chinese theater for ten years, injecting a steady stream of fresh blood into it and flourishing. Wuzhen’s stage will also adopt a more inclusive and open attitude, live up to the expectations of the majority of the theater community, and embark on a new journey.

(The picture shows the scene of the closing ceremony, provided by the organizer)

The new frontier of laboratory medicine: POCT systems in the telemedicine era

How to Choose the Right Online Casino for...