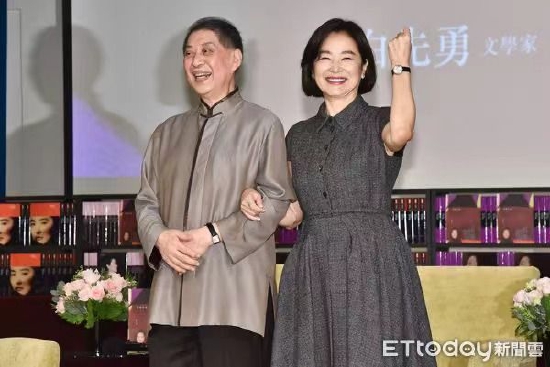 Sina Entertainment News Actress Lin Qingxia today (4th) attended the release and dialogue of her new book “Short Works of Qingxia” and shared her writing journey with well-known writer Bai Xianyong. In addition to writing and communicating, Bai Xianyong also mentioned that Lin Qingxia in his eyes is very emotional, and also revealed the story behind the photos in Lin Qingxia’s book.

Bai Xianyong mentioned that there are two photos in Lin Qingxia’s book that made him particularly impressed. One of them was in India, where Brigitte Lin bought flowers from a group of poor children, “The children who sell flowers in India are very poor, very poor, and they only earn a little Qingxia was tempted and bought all the flowers, but she didn’t take them away, she just gave them the money.” Then there was a picture of Brigitte Lin wearing small flowers by her ear, taking a group photo with a group of children happily.

Another photo is in Indonesia. Brigitte Lin gave a banknote to each of a group of poor children. Bai Xianyong said with a smile: “Qingxia has the same smile again, showing her love for children.” Brigitte Lin shyly said, “This It’s a small thing.” She said frankly: “I like to see them happy. I was also in a very poor and rural place. At that time, I dreamed that people like this would come to our country lanes.”

Brigitte Lin said: “I find my current mentality very interesting. I like to see people happy. I am happy when they are happy, so I often surprise people.” (ETtoday/text)

See also  Wealth per capita, the Savonese in red. Manufacturing industry collapsed in 2020

The domestic oil price adjustment window opens on the 5th to open No. 92 gasoline or return to the “7 yuan era”_Hangzhou Net

Ultra-Orthodox at the service of tiktok

The short film “There is a road in...