During the Spring Festival, many movies were released, and the box office and word-of-mouth attracted widespread attention.

According to Maoyan Professional Edition data, as of 12:00 on January 25, the total box office (including pre-sales) of the 2023 Spring Festival stalls exceeded 4.23 billion yuan.

It is worth noting that basically every film has the blessings of big IP, well-known directors or well-known actors, such as “The Wandering Earth 2”, “Man Jianghong” directed by Zhang Yimou, “Unknown” and “Bear Infested” starring Tony Leung and others. The movie “Bear Infested: Stay with me “Bear Core””, “The Deep Sea” directed by the director of “Journey to the West: The Return of the Great Sage” and so on.

In addition to the biggest expectation of the Spring Festival file, it has to be “Man Jianghong”. The film uses a new type of “suspense + comedy” to lead the audience into the legend of loyalty and loyalty of righteous men in the Southern Song Dynasty who sacrificed their lives and eradicated evil.

Although the previous films directed by Zhang Yimou had a good reputation, “Man Jianghong” released this time broke his personal record. The box office surpassed the movie “Above the Cliff” by 1.191 billion yuan, becoming Zhang Yimou’s highest-grossing film released in the mainland.

And “The Wandering Earth 2”, as the sequel to the 2019 Spring Festival movie “The Wandering Earth”, is also the most anticipated film for this year’s Spring Festival. In the film, the hard-core presentation of space elevators, lunar nuclear explosions, digital life, etc. on the big screen made science fiction fans excited. At the beginning of the Spring Festival, the box office of the film broke through 500 million yuan on the first day of its release, becoming the top box office champion of the day, and then took the lead in breaking through 1 billion yuan.

Under the influence of the epidemic in the past three years, the film and television industry has also been hit hard. With the changes in the epidemic policy, the film and television industry is also on the positive side. First, “Avatar: The Way of Water” was released in China in December last year. Although fans gave mixed reviews to the film, the box office is still good. According to the data of Maoyan Professional Edition, as of 12:00 today, the box office of the film in the mainland exceeded 1.603 billion yuan.

In January, the film announced that it would extend its release until February 14. 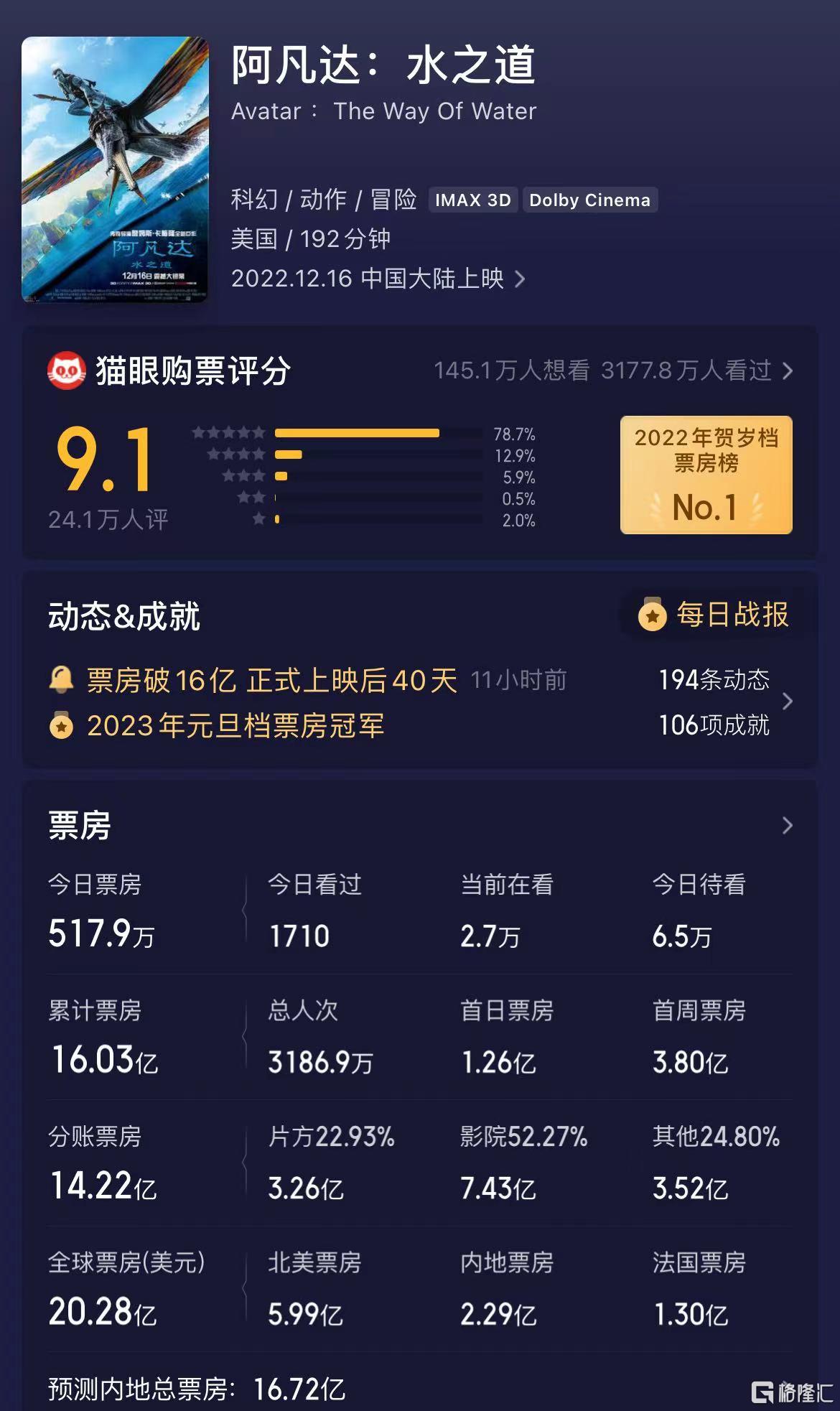 See also  Thom Browne returns to the catwalk with the usual, energizing, irony

Guotai Junan Hong Kong Research Report predicts that the rising trend of movie ticket prices is more certain, and it is estimated that the total box office of the Spring Festival in 2023 is expected to exceed RMB 8 billion.

Wanlian Securities Research Report stated that the optimization of epidemic prevention policies + a slight drop in pre-sale ticket prices + high enthusiasm for movie viewing and other multiple positive factors will drive the performance of the Spring Festival stalls. The box office of the Spring Festival stalls in 2023 is expected to create a new high in recent years. 9 billion.

At the same time, a number of listed companies have appeared behind the 7 films in the Spring Festival, including China Film, Enlight Media, Wanda Film, Bona Film, Alibaba Pictures, and Maoyan Entertainment.

China Film stated on the interactive platform on January 20 that the seven major films released during the Spring Festival in 2023 will all be produced or distributed by the company. Among them, the hard sci-fi blockbuster “The Wandering Earth 2” was produced and published by the company, “Man Jianghong”, “No Name”, “Bear Infested·Stay with me “Bear Core”” and “Chinese Ping Pong: Jedi Counterattack” were produced and jointly issued by the company. “Deep Sea” and “Exchanging Life” are films that the company participates in distributing.

Enlight Media not only released “Deep Sea” as the main cast, but also participated in three films: “Man Jianghong”, “Exchanging Life” and “Chinese Ping Pong: The Jedi Strikes Back”.

The producer and distributor of “No Name” are both Bona Pictures, and the main producers include Ali Pictures.

Nearly 5,000 students have not yet been enrolled in Yopal schools – news

Explaining Entertainment丨”Hurricane” dominates the screen, why is he...