The TV series “County Party Committee Courtyard” officially announced the finalization today, and released a preview of the finalization and a poster of the “Building Brightness Together” version. The play will be broadcast on CCTV-1 in prime time from December 7, 2022, jointly broadcast on Zhejiang Satellite TV, Beijing Satellite TV, and Hebei Satellite TV, and will be broadcast on the entire network such as Tencent Video and Migu Video. Overseas audiences around the world can watch the show on the Youtube platform, Noon Sunshine Overseas Official Channel the next day. At the same time, the drama will be broadcast in mainstream media in Hong Kong, Macau, Taiwan, ten ASEAN countries, Japan, South Korea, North America and other countries.

Writing grassroots stories and interpreting the road to light

“County Party Committee Compound” focuses the narrative lens on the developing Guangming County, and shows the vivid stories of grassroots county governance from a vivid head-up perspective. At the beginning of the finalized preview released this time, Mei Xiaoge ran on the runway with firm eyes. With the sentence “break the boat”, Mei Xiaoge also started his hard work in Guangming County. There are frequent problems in Guangming County, such as demolition, environmental protection and investment attraction. It is urgent to explore a new development path. “Nail households” used ladders to isolate cadres from the door, excrement produced by pig farmers polluted the river, grassroots cadre Qiao Shengli (played by Wang Xiao) was punctured, and scenes showed problems without evading them. It implies the aspirations of the masses: “I have to take a look at your ability to serve the common people.” The leadership team headed by Mei Xiaoge knows that it is not easy to develop, but still holds that success does not depend on my dedication. Struggling with spirit, they measure every piece of land with down-to-earth steps, compare their hearts with each other, seek truth from facts, and handle things one by one, realizing personal value in daily work. At the end of the trailer, Mei Xiaoge is still running on the runway, just as the development road of Guangming County is long, but the footsteps of the Guangming people are always steady.

In the “Building Brightness Together” poster released at the same time, the building scaffolding was built on the map of Guangming County, and the construction of the county is in full swing. On the “big construction site” at the grassroots level, the leadership team represented by Mei Xiaoge, Ai Xianzhi, and Lu Qingshan (played by Huang Lei) is commanding the construction in an orderly manner. When it comes to infrastructure work, there is a fiery scene where the cadres and the masses work together to build Guangming County. 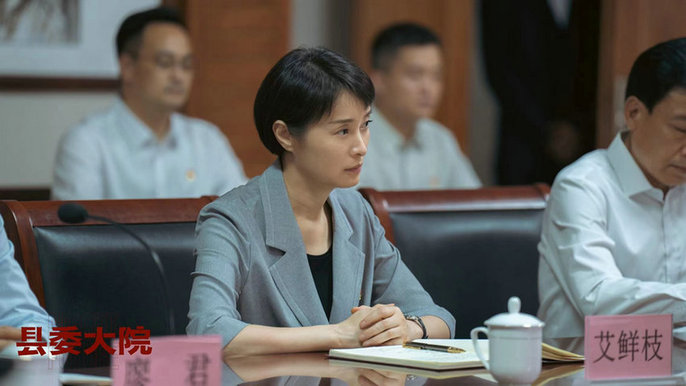 “County Party Committee Compound” fictionalizes the location of Guangming County, and tells the workplace stories of grassroots cadres in small towns and the daily life of the masses. In the process of script creation, the play adheres to the creative tone of realism. The main creative team goes deep into the front-line experience research, does not avoid problems, does not take tricks, and uses scattered points and line drawing techniques to sincerely depict a vivid portrait of the grassroots group. Become a window for the audience to understand the vast county.

Adhering to the creative path of using small cuts to reflect big themes and small characters to reflect the big era, the play focuses on real and sensible individuals in the grassroots narrative, not only telling what happened in the compound, but also telling the story of people outside the compound. story. Under the delicate lens of the play, a strong pyrotechnic atmosphere blooms, making a character feel flesh and blood, and writing daily and ordinary stories at the grassroots level.

See all kinds of things at the grassroots level, and taste the stories of small towns, so stay tuned for “County Party Committee Compound”.

Gold market analysis: Need to break through the resistance around the 200-day moving average 1794.38 again to open up a new round of upside Provider FX678

Music and morals, Tolkien and more