Original title: “Don’t be a stubborn man in China” The youthful blood and feelings of family and country in “Leaning on the Railing”

Photo courtesy of the drama photo

China News Service, Beijing, June 13th. The inspirational drama of the times, “Leaning on a Railing, A Wind and Cloud Rise” recently came to an end. The drama focuses on the two main narrative lines of the passionate young pilots in the 1930s and 1940s and the older generation of literati scholars “wenwu” , depicts a “pictorial book” in which two generations pursued their beliefs and continued their context, and focused on the story of the younger generation being inspired by communism, finding faith in the “dark night” and growing into staunch communists.

Photo courtesy of the drama photo

In recent years, the main theme dramas have attracted a lot of attention. Among them, there are many excellent works that have been loved by a large number of young netizens and audiences on rating websites and social platforms. This time, “Leaning on a Railing” has been affirmed, on the one hand, it takes into account the historical reality. The true fusion with art, the intersection of mainstream values ​​and public aesthetics, better conveys the spirit of the times.

See also  Joyvio Foods: The company will further strengthen the operation of overseas assets and vigorously develop the Chinese market under the favorable environment of industry recovery_ Oriental Fortune Net

On the other hand, this work focuses on a rather novel theme, and does not follow the re-engraving of the existing model in the creation, but makes innovative attempts while drawing on excellent experience, effectively avoiding the content of the theme. Homogenization breaks the audience’s “expected horizon” and creates an appropriate “aesthetic distance”.

In “Leaning on a Barrier, a Wind and Cloud Rise”, the narrative of the dual lines of civil and military left a deep impression on people. Zhang Qiqiqiwen resolutely joined Zhaofei from Rong Rong, Meng Haitang shined in the education cause by teaching and educating people, and Ling Wenyue was calm and fearless. Invitation to the last lesson, when the foreign enemy is carrying out the double aggression of culture and force, the patriots on the rails will be supported by the intersection of civil and military lines. .

In this regard, Wu Xiaomei, who is the producer and co-screenwriter of the film, said, “The double line of civil and military is to try to depict the characters with different personalities in the background of the times, and at the same time, the double lines are intertwined to accelerate the progress of the story and make the story exciting. Good-looking. The characters are not only the young pilots who fought to the death and fought to save the country on the battlefield filled with gunpowder, telling the story of how they were summoned, defected to the light, and defended the country and the people, and the characters who seemed weak, but adhered to their strengths, used flesh and blood and steel Scholars who will continue the national cultural bloodline.” 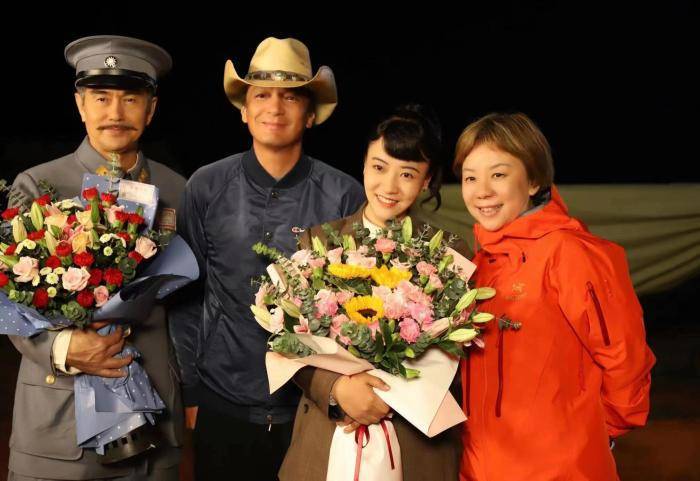 Photo courtesy of Wu Xiaomei and the main creative staff

From the choice of characters under the changing times to the depiction of the family life of each character, the characters in “Leaning on a Railing” are vivid and three-dimensional, and at the same time show a strong sense of mission.

Some netizens commented that the play made the phrase “Don’t be a handicap man in China” deeply imprinted in their hearts, “In that era, many people really sacrificed for this land of China. Personally, I feel that emotional dramas are really not like this. The focus of the drama is not the focus of the hero and heroine’s life, first Xu Guo, then Xu Qing.”

With the theme of “Blood and Inspirational”, “Leaning on a Railing” attempts to break the historical barriers spanning a hundred years, and complete the isomorphism of family, country and youth with the self-growth history of characters across time and space. The life trajectories of the characters in these plays show the real growth experience and emotional confusion in life, which undoubtedly quickly narrows the spiritual distance between them and the young people of today. The “light voice” and contemporary expression allow young audiences to feel the heat in their blood through emotional resonance.

Wu Xiaomei bluntly stated that she was deeply moved by the relevant historical themes before she created her work. “Anti-Japanese pilots once used ‘our body, planes and bombs, we should die side by side with the enemy!’ Even if there is only one plane, they have to take off to meet the enemy. From the beginning of the Anti-Japanese War to the fall of Wuhan, they sacrificed more than half of them in just 16 months, and more than 200 people died, with an average age of less than 23 years old…”

“‘Death is not forever, forgetting is’ is the last sentence I wrote in the script, and it is also the original intention of creation.” Wu Xiaomei said. (Finish)Return to Sohu, see more