Home Entertainment Drama Festival under the Epidemic: How to Turn Crisis into Vitality-China Daily
Entertainment

Drama Festival under the Epidemic: How to Turn Crisis into Vitality-China Daily

Drama Festival under the Epidemic: How to Turn Crisis into Vitality

On the evening of October 24, the 8th Wuzhen Drama Festival came to an end. After two years, this cultural feast created in the name of drama has once again become the focus of attention both inside and outside the industry.

In the 8th session, 177 specially invited plays, 124 finalists for youth competitions, 167 small town dialogues, over 10,000 ancient town carnival performances… Since 2013, “Cultural Wuzhen” has set out to create the world-famous “Wuzhen Theater Festival” “With the four units of specially invited dramas, youth competitions, ancient town carnivals, and small town dialogues as the core, it has become one of the most prestigious drama festivals in China.

In the millennium Wuzhen, while preserving the original Jiangnan water town style, it has completed the perfect fusion of tradition and modernity. Pieces of black-and-white walls are filled with rich culture due to the Wuzhen Theater Festival.

The Wuzhen Theatre Festival is a return after a one-year suspension due to the epidemic. In the context of the haze of the epidemic that has not yet dissipated, what are the unique features of this year’s theater festival compared with previous ones? Why do more and more young dramatists choose to come to Wuzhen? Does the epidemic bring crisis or vitality to the drama? The reporter was looking for answers at this Wuzhen Drama Festival.

Return after the pause: more than just drama

At every Wuzhen Drama Festival, a large number of drama fans will come as promised. In their eyes, Wuzhen during the theater festival is like a paradise for theater.

Less than a week after the ticketing was issued, more than 25,000 tickets for specially invited dramas were all sold out. The fastest single drama sold out in only 8.4 seconds. The number of participants in the online ticket purchase was 356,000… “Sunrise”, “Hamlet (Tibetan version)”, “The Wilderness”, or imaginative innovative works “Between the World” and “Game Boy”; whether it is the masterpiece “Once Upon a Time” or a young dramatist The pioneering work “Tudogall and Spike”; whether it is the realistic “Dog Still Barking”, “Miscellaneous, Zeluo, or Salad”, or the “Five Tones” and “Smoke from Seven Orifices” that focus on expression… different themes and forms They are all different, but they all show the infinite charm of drama. In addition, there are 18 youth competitions running through the arena, launching the passionate competition for young vitality; 10 small town dialogues, listening to the master’s thoughts up close… 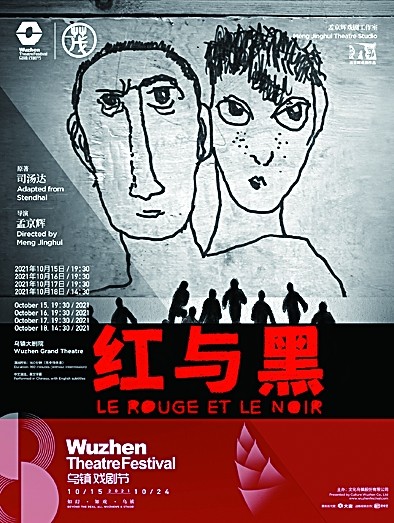 There are more people who are not fans of drama, but also come here admiringly. They may only occasionally walk into a theater and watch a play at will. Some people even didn’t walk into the theater at all, but just felt the atmosphere of the drama in the streets and lanes of Wuzhen-thousands of ancient town carnivals, colorful, opened an unprecedented mass carnival.

Mr. Wang and his wife from Hangzhou took advantage of the weekend to bring their 5-year-old daughter to Wuzhen. “We didn’t buy tickets for the theater. The children are too young to understand drama. Carnival is very good, so that children can start from street theater to receive enlightenment. These two days, the children have a great time.” Mr. Wang said.

In addition to the carnival-style “corner encounter drama”, there are also more novel drama collections. “The boundary of drama will never be limited by theater and stage. In the literary assembly and drama collection, drama-related music, film, art, reading, exhibitions…everything is everywhere, and it is always changing.” Wuzhen Drama Festival was launched. Chairman Chen Xianghong introduced.

Director and actor Xu Zheng said that Wuzhen has actually surpassed the concept of a drama festival and is more like a drama life festival. In such a relatively closed scenic spot, everything becomes part of the drama. Here, people can understand what a wonderful thing drama is.

The prosperous youth competition: open the road to dream

Bengwan Theater was one of the unremarkable theaters in Wuzhen, but because of the youth competition, it became the theater with the highest attention and the longest waiting time for the audience. Here, the power of youth drama grows vigorously, and the light of youth drama shines.

Since the 8th Drama Festival, the youth competition unit has attracted the attention of hundreds of thousands of young talents. More than 8,000 people have registered and received a total of more than 2,500 entries. In the end, 124 young works were successfully selected. Today, they are the pioneers of today’s Chinese theater stage, and they are also emerging on the international platform.

In this year’s youth competition, the competition has become more intense and the works have become more mature. As of 24:00 on August 8, 2021, a total of more than 1,300 people have registered. The Wuzhen Theatre Festival Organizing Committee has received a total of 571 application materials. After nearly a month of intense scoring, the jury selected 18 finalists.

There are no lines in the whole process, but the work “I Came from Her Body” that expresses the mother’s heavy love through dance and body language; the work “Princess and Death” that uses witty and humorous lines to trigger the audience to reflect on female characters; use drama The work “A Confession About Amber” that pays attention to how abducted children return to their families… Although the performance time is short, the audience will express them with long-term applause after each competitive performance. Favorite.

“These talented dramatists, with their outstanding works, are selected to show better drama works to the audience. In the future, countless young dramatists who will go out of the Wuzhen Theater Festival will shoulder the burden of Chinese drama. The seeds of drama are left in every corner of the world, take root, germinate, and then become towering trees.” Huang Lei said.

Drama in the post-epidemic era: turning crisis into vitality

Where should the drama in the post-epidemic era go? Will live screening and online drama be used as alternatives and become the future development trend? At this drama festival, the discussion on these issues attracted special attention.

Different from previous editions, this year’s Wuzhen Theatre Festival, there are no live performances of theatrical works from foreign teams. The epidemic has restricted the arrival of outstanding foreign dramatists, but it cannot prevent those who love drama from experiencing the charm of world-class drama in Wuzhen.

Huanhu Theater is a brand new theater opened this year in Wuzhen Theater Festival. In 7 days, 8 excellent works from six major theatre festivals (art festivals) including Edinburgh Art Festival, Berlin Theatre Festival, and Avignon Theatre Festival were shown in the form of live screenings. “The screenings of great dramas from the world are not solely due to the epidemic. In the future, we may use them as a fixed unit of the Wuzhen Theater Festival. There is only one purpose, which is to let more people understand the drama and watch the good drama.” Chen Xianghong Emphasize.

In addition, this year’s drama festival opened a new form of “online live broadcast” throughout the whole process. Audiences who cannot come to Wuzhen can directly hit the youth competition scene through online live broadcast, and experience the fun of watching the show with the actors and audience.

“The biggest feature of drama is the connection between actors and audiences. Such a sense of atmosphere cannot be achieved through the big screen or online viewing. However, the repeated epidemics have made audiences go to theaters to watch dramas no longer as they wished.” Wuzhen Ding Naizhu, the chief planner of the festival, believes that the crisis is also a turning point. The epidemic has given the entire industry an opportunity for self-examination. In the future, whether drama can create a new model that is neither a theater nor a movie, and turn crisis into life, is worth exploring for all dramatists.

“I thought online drama was second-hand, meaningless. But with more and more practice, my opinion has also changed.” Yu Rongjun, artistic director of the Shanghai Dramatic Art Center and a national first-level screenwriter, speaks at the small town dialogue Said that the attempt to put offline performances online is to preserve the essence of the theater, so that more people, especially those in remote areas, can have the opportunity to understand and approach the theater.

Regarding doubts, he believes that just like when movies and TV appeared in the past, some people were worried about the impact on drama, but after so many years, facts have proved that as an art form with a long history, drama has a strong vitality. Today it still has a wide audience and fans. The use of VR technology may bring more possibilities for drama.

“Only by embracing new technologies can we meet more possibilities.” Yu Rongjun is full of expectations for drama in the post-epidemic era.

Original Title: Drama Festival under the Epidemic: How to Turn Crisis into Vitality

“Tea Cup Head” animation will be launched on...