Exciting rigor from Prada, the lightness of Emporio Armani, the fluid elegance of Max Mara

Moralizing is a daunting task, especially in times of runaway deregulation, but someone will have to shoulder the burden. “I have nothing against excess, as long as it has a reason and a sense, which at the moment, around, I don’t see” he says Miuccia Prada. The moralizer, in fact paired with Raf Simons, it is she, who has already been so many times in past ages and who has the compass firmly pointed against the current. But, and here is the fatal difference with the too many Savonarolas and millenarians with an easy sermon, the two are free from any moralism: they move gracefully and punctually, however lightly there may be in the Elysian fields of the high concept, and they are fashionable.

Clothes: nothing more and nothing less, yet mixed with thought in every fiber. The mantra of the season, expressed in a test of funereal and invigorating vitalism, as bare as a pen drawing by Alberto Giacometti or a medieval wooden sculpture, is raw. «Raw as not useless, without complications – says the lady, in her turn crudely dressed in an embossed white T-shirt -. We often return to this concept that attracts us from a political, theoretical and aesthetic point of view. In this collection there is no room for complicated structures ». The test, sober to the limit of gloom in the abundance of janitor’s blacks, policeman’s grays and voluptuous flashes of red, energetic instead of renouncing, is an exercise in decortication of forms that echo the bon ton of the sixties – topos pradesco par excellence – reduced to zero, bruised, crushed like sheets of paper thrown into the trash. The result is a healthy injection of pauperism, net of the frankly punitive onesies. 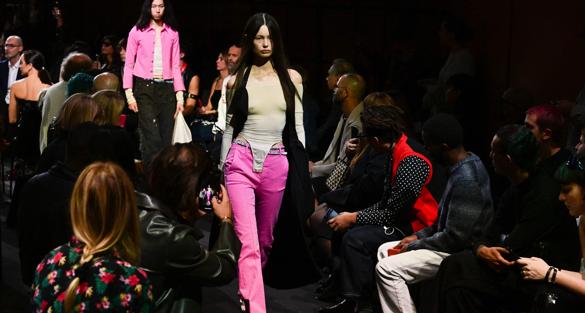 And Margiela House pauperism has always been at home, but lately it has been diverted more decisively towards MM6, the line that is easier to understand and widespread. Accompanied by a live orchestra, the theory of tattered t-shirts, moth-eaten jackets, oversized trousers and minimal tops is pure Margiela, in a metropolitan key.

Elsewhere, the horizon of meaning and aesthetics moves towards the sea, as the season dictates. Gabriele Colangelo, from Giada, purifies and excites, thinking of Pascoli’s maritime verses, but gives his women, always so ethereal, a frisson of sensuality. From Moschino everything is inflatable, like a life preserver, but the game of creative director Jeremy Scott points elsewhere: to the terrible inflation that afflicts us all, to which we respond with a saving laugh.

Light in ways, shapes and colors, from Emporio Armani Giorgio Armani imagines an eclectic mix of Balinese exoticisms and truly Armanian deconstructions, and presents everything on low heels, focusing on a natural and washed-out palette lit in the evening by the glow of the embroideries. It is yet another reiteration of a style that the more it repeats the better, with one drawback: expressed in these terms, the spirit of Emporio is too close to that of the main line, and loses the metropolitan momentum that has always characterized it. «This collection expresses a thought of freedom and openness: the lightness of returning from a long journey in which things and memories have accumulated, and mixes them in one’s daily life. It’s like taking a vacation to the city, ”explains Armani.

Han explained to the United States the US response to Yin Xiyue’s “explosive language”: not a problem

Christian Cantamessa: “Imagination? It’s a TV to tune in”

From Urban Fitness comes bioelectric training with the...