Gianni Crespi: “So we will relaunch Nava’s design”

The pandemic slowed the relaunch of Nava and Smemoranda Group due to a mix of factors, including the closure of shops and the collapse of travel for work and leisure. For a designer leather goods brand – as for the entire accessories sector, as well as for clothing – Covid “was a disaster”, clearly says Gianni Crespi, CEO and majority shareholder of Smemoranda. The relaunch planned between the end of 2019 and the beginning of 2020 and the objectives, for Nava and for the group, “have only been moved forward by at least a year”. Crespi remains convinced of the brand’s potential in Italy and abroad and has seized the recent SuperSalone del mobile in Milan to bring attention to Nava’s connection with the world of design.

There are many designers who have crossed the history of Nava. But the next collaboration is perhaps the most Milanese and at the same time the most global of all.
«Nava was born in Milan in 1970, as a project of the heirs of Aldo Nava, who in 1922 had founded a graphic arts company. I don’t think there are many brands in this segment with a history that is actually that long and that embody the link between leather goods and design, between functionality and creativity. I am happy that Stefano Boeri has accepted the invitation to design for Nava and the happy coincidence with the SuperSalone is the best of wishes: Boeri, the mayor Beppe Sala and many operators in the sector have strongly wanted and invested in this event, in Rho and with the Fuorisalone in the city, and courage is rewarding everyone ».

What did Stefano Boeri, who is also president of the Triennale, draw for Nava?
«It’s called Bodypack, and it has two versions, Poncho-Bag and Vest-Bag: I consider them revolutionary accessories, which have versatility and flexibility, thanks to a system of containers of various functions and sizes. Each person can play with his BodyPack, changing the configuration, according to his preferences and needs.

A product is not enough to relaunch a brand. What other projects do you have?
«Nava is not just bags, laptop or tablet cases. It is a famous brand for the collections of notebooks, diaries, credit card holders. In the months of the pandemic, wanting to see a positive side, we worked on every detail of the new collections and perfected collaborative ideas and projects, such as the one with Inter, which we will present in a few weeks. It was not taken for granted that the world of paper survived the digital revolution, but it did and we also see it with Smemoranda, which remains the best-selling diary in Italy. Then, of course, we also had to invent the app, because we have to stay in tune with the youngest, who are Smemoranda’s customers today and, hopefully, Nava’s tomorrow ». 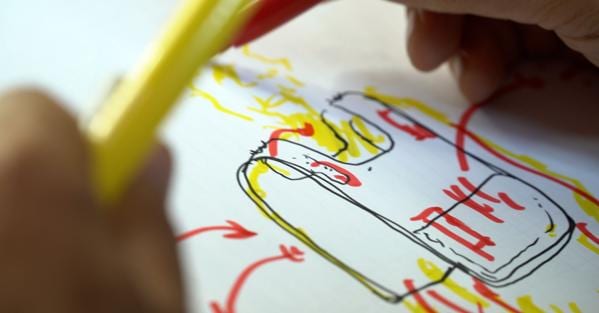 Sketch by Stefano Boeri for Nava

How will distribution evolve?
«The Milan store is in via Durini, a street where there are the biggest names in furniture-design, but we would like to find a space in Rome and Shanghai. We have also signed agreements with e-commerce platforms in China, Korea and Japan ».

That’s why you need to update your iPhone, iPad and Mac right away

I loved an alien, the woman who did...