Recently, in a variety show “Escape from the Secret Room” broadcast exclusively on Mango TV, the audience found that many elements were similar to the Chinese horror game “Paper Wedding Dress”.Even the background music, the heroine’s name, and some storylines are completely consistent.In response, the official “Paper Wedding Dress” officially issued a statement in response, saying,No corporate organization or individual is authorized to use the relevant intellectual property rights in the “Paper Wedding Dress” series in scenes or works such as variety shows, escape rooms, script killings, novels, and setting sets. Recently, many fans and users have reported to our company that a certain film and television work is counterfeiting and plagiarizing our company’s “Paper Wedding Dress” series of works, including the name, logo, storyline and characters of the “Paper Wedding Dress” series of products. , music, art images, video animation and other elements involving intellectual property rights. Hereby makes the following statement on this matter:

1. At present, our company does not authorize any enterprise organization or individual to use the relevant intellectual property rights in the series of “Paper Wedding Dresses” in variety shows, escape rooms, script killings, novels, setting collections and other scenes or works.

2. The “Paper Wedding Dress” series as our company’s original national style adventure puzzle game, from the early creation to the game’s launch, after many years, the efforts and sweat of the creative team have been condensed.It has persisted all the way to this day and has been recognized by the majority of fans and users.

Chinese traditional folk culture has a long history and is a precious historical heritage and common memory of the Chinese nation. We hope that creators of various art forms will use it as a material to create more excellent works to carry forward the potential and charm of traditional folk culture. Audio-visual entertainment for the majority of players, friends and the people.

We also hope that creators can absorb the essence of folk culture, and try to present the charming charm of folk culture in different schemes and angles with unique and original ideas and methods as much as possible. Orderly and benign ways learn from each other and verify each other, which drives the vigorous development of the entertainment market of this theme and continues to grow. 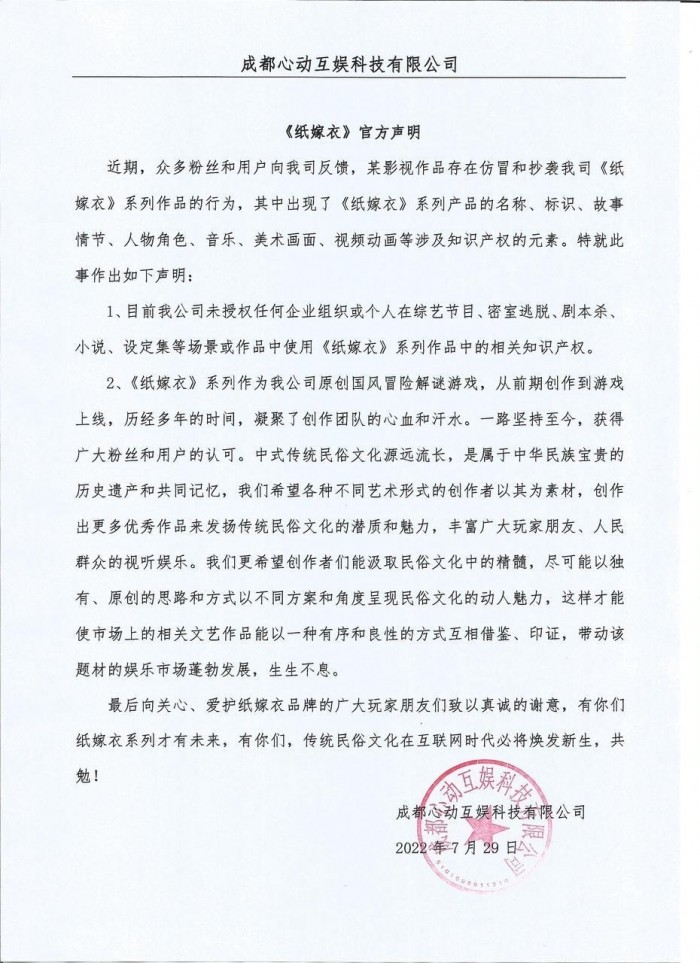 Announcement on the progress of Maoshuo Power Technology Co., Ltd. on the redemption of some wealth management products and the continued use of idle raised funds for cash management_Influence_Idle_Funds raised

Drink and sing: a story of encountering masterpieces...