“Break in Heaven”, “Little Tadpoles Looking for Mother”, “Black Cat Sheriff”, “Gourd Brothers”… these classic works that have been popular and accompanied the growth of generations of Chinese people are all born in the same soil-namely, Shanghai Art Film Studio. During the 11th long holiday, some netizens circulated news that the Shanghai Art Film Studio had been packaged and bought by Disney.

The official WeChat account of the China Internet Joint Rumor Refusal Platform said,After inquiry and verification by Shanghai Internet reporters who dispelled rumors, it was found that the matter was purely a rumor. 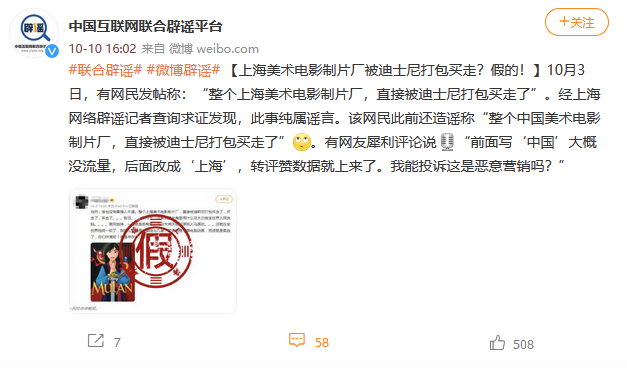 The reason given by the “rumor maker” is rather far-fetched. His claim is that “Mulan” was produced by the original crew of “Hit in Heaven”.

In addition, we found that the affiliated company of Shanghai Art Film Studio is Shanghai Art Film Studio Co., Ltd., established in September 1989, and Shanghai Film (Group) Co., Ltd. is the shareholder of the company. Holding 100% of the shares, Shanghai Film (Group) Co., Ltd. is in turn 100% held by the Shanghai State-owned Assets Supervision and Administration Commission, and has no commercial relationship with the Disney Company. 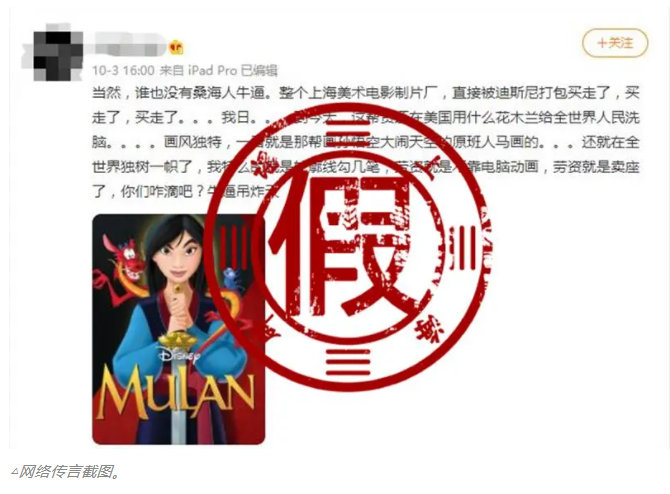 See also  Trevi: "We, the kids of the 90s. My novel, a hymn to friendship between punk music, motorcycles and drug parties"
cnBetaDomestic comicsOfficial rumor: Shanghai Art Film Studio was packaged and bought by Disney is purely a rumor
0 comment
0
FacebookTwitterEmail
previous post

HBO’s annual drama “War of Inheritance” will be...

Francesco Ferraris at the helm of the SMI...

The first flying bike for sale in Japan

How did the ancients dye their hair? Chinese...