The martial arts drama of the same name adapted from Wen Ruian’s martial arts IP “Say Heroes Who Are Heroes” is about to usher in the membership finale on Tencent Video today. In the ultimate confrontation between the brothers Wang Xiaoshi and Bai Choufei, while adhering to their own ways, the arc of the characters also shines in the ultimate choice. “Speaking of Heroes Who Are Heroes” deconstructs the world of youth in a youthful way, and uses poetic blanks to express the infinite possibilities of juvenile growth. The characters in the play pursue their dreams and their attitude towards life becomes more and more courageous, and they also make vivid and useful realistic projections for young people today.

The grievances and grievances of the rivers and lakes stir up the battle of the court, Wang Xiaoshi and Bai Choufei’s final showdown

The plot of the ending stage of “Who Is a Hero” is gripping: Bai Choufei finally got what he wanted to stand on the pinnacle of power, and Wang Xiaoshi finally saw the way forward after “farewell” to his eldest brother Su Mengzhen, and was ready to realize himself The rivers and lakes dream in my heart. After a heart-to-heart and arrogant farewell over the wine, “Little Stone” and “Dabai” confront each other, and who is the Jianghu in the end, we will leave it to us to reveal in the play!

Youth in the rivers and lakes, chasing dreams with passion. The martial arts drama “Say Heroes Who Are Heroes” shows the ultimate romance, but also shows the turbulent waves of the world, the cruel and cruel heart of contradictions in reality. Under the atmosphere of the rivers and lakes wrapped in layers of five flavors, the audience immersed in the separation of life and death of the protagonist, as well as their trial of their desire for power. Regarding “Wang Xiaoshi’s Perseverance” and “Bai Choufei’s Blackening”, the audience entered the play first, and then went to the top. “After the blackening, Da Bai killed his former elder brother. It’s really crazy. It’s abusive and sad to see people!” “My favorite is Little Stone and Gentle, they were pure and kind at the beginning. , after the changes in the world, he has not lost his self, and he is still sincere. This kind of perseverance is quite rare.”

In the upcoming finale, the portraits of the three people completed by Wang Xiaoshi also failed to pull back the obsessed Bai Choufei. The latter used gentleness as a bait to force Wang Xiaoshi to appear. The final battle of Jinfeng Drizzle Tower, brother Who will kill the deer in the duel? How to resolve the bigger conspiracy and threats above the court? At the end of the episode, some viewers sighed like this: “These grievances and grievances really have a martial arts temperament, and the solution of righteousness and personal grievances is very gentle. Everyone is justified, but they can’t tell. It is the grievances, and this is the rivers and lakes.” What is the rivers and lakes? What is a hero? Episodes are about to give final notes. 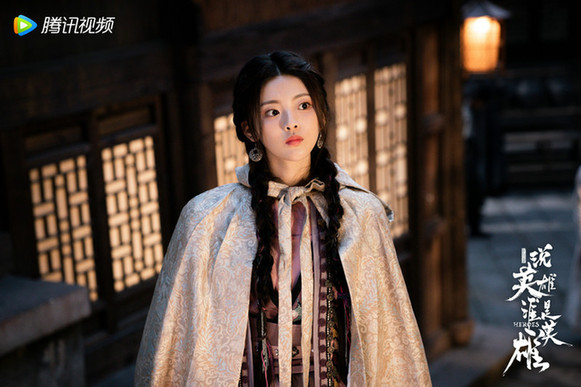 How to interpret the Jianghu and Chaotang written by Wen Ruian in a drama? “Say Heroes Who Are Heroes” made a surprising answer in the style of new martial arts, and won unanimous praise from professionals and ordinary audiences. The dream of rivers and lakes under the lens of director Li Muge and the poetic rivers and lakes in Wen Ruian’s book complement each other, and show the audience a rare new landscape of martial arts dramas in recent years.

First of all, “Say Heroes Who Are Heroes” implements the “poetic expression” of Wen Ruian’s works. Wen Ruian once interpreted the martial arts concept of his novels, “Poetry can be combined with martial arts. To make poetry novel and visualized, and then to poetize and even image novels, this is the way out of martial arts novels, and it is also an achievement.” To Li Muge’s novel presentation in this drama, his scene scheduling, image processing methods and live-action shooting provide a concrete expression space for this “poetic feeling”.

The poetry of rivers and lakes is expressed in the real landscape, which more truly sets off the grand or precipitous inner world of the characters. In some specific scenes and the setting of the character’s appearance, Li Muge has worked hard on the historical customs and character temperament, which effectively reflects the quality of the scenes and the characteristics of the characters. For example, the texture presentation of the sea festival parade in the first episode can be called an explosion of details: the basic red color, yellow lighting, and various details of the costumes are superimposed together, which visually reflects the impact of exotic culture. Another example is about the reappearance of characters. Wen Ruian called Su Mengzhen “the appearance of poetry and the connotation of knives”. The drama achieves a unity of contradictions in the characters. Through Su Mengzhen’s red clothes and gorgeous weapons, the sick body and the The coexistence of leadership qualities shows the personal charm of the characters. In addition to the poetry and texture on the screen, there are also poems that correspond to the novel and the plot trend at the beginning of each episode, such as “Thousands of Floating Clouds Dreams, Once Entering the Rivers and Lakes”, “The Red Sleeves and One Sword Set the Wind and Rain, and the Organization Will Be Empty in the End “… Poetry and plot are intertwined, and the viewer also has a sense of being there. 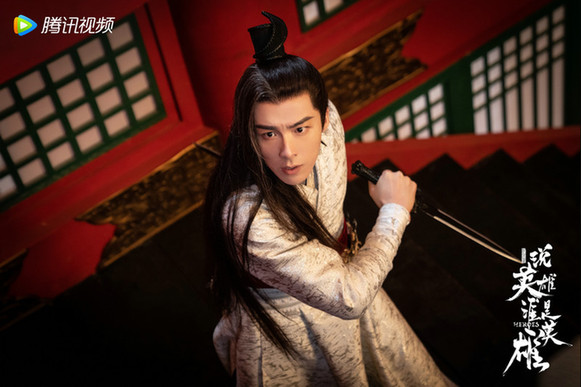 In addition to poetry, as a work of youthful expression, “Who Is a Hero” needs to show a realistic background. Director Li Muge likened Wang Xiaoshi, who traveled down the mountain, to a college student who had just graduated in reality, “He is talented, tall and simple. He left the ivory tower and came to Beijing, where the red dust tumbled. Change the character’s background.” The growth of teenagers is always accompanied by constant loss, setbacks and tempering, which not only makes the growth arc of the characters more full and real, but also allows the current young audience to capture realistic projections from the spiritual growth of the characters in the play.

The heroic story has come to an end, and youth growth is still on the way. At the end of “Speaking of Heroes and Who Are Heroes”, an open-ended question was raised for the audience: in a complex world, in a world where people are unpredictable, the most important thing is whether you can keep your original intention and not be tempted by fame and fortune. This is not only a test for the protagonist of a martial arts drama, but also a required course for every young person on the road to growth.

Durant: If you don’t practice for two days, you will be anxious. Now you only focus on championships – yqqlm

Hong Kong stock ETF link has issued detailed rules, and the agency expects that A shares are expected to flood into the incremental capital provider Cailian News Agency

Late mother talks Indian childhood at her own...