[香港，2022年12月6日] Game Source Entertainment (GSE) announced that it will cooperate with the famous Japanese game company “Idea Factory”‘s otome game brand “Otomate” to release the traditional Chinese version of Nintendo Switch™ “Destiny Nine -NORN9 LOFN-” and it is scheduled to be released in December 2022 It will be officially released on the 29th. “Nine of Destiny –NORN9 LOFN–” combines the story of “NORN9: Var Commons” and the first Chinese sequel “NORN9: LAST ERA”.

When players enter the game, they can directly choose to start playing the VAR COMMONS chapter or the LAST ERA chapter.

※Because this chapter is played from the perspective of Kongtai, the three heroines will be called by default names in the story.

Once a heroine is chosen, the name can be changed. 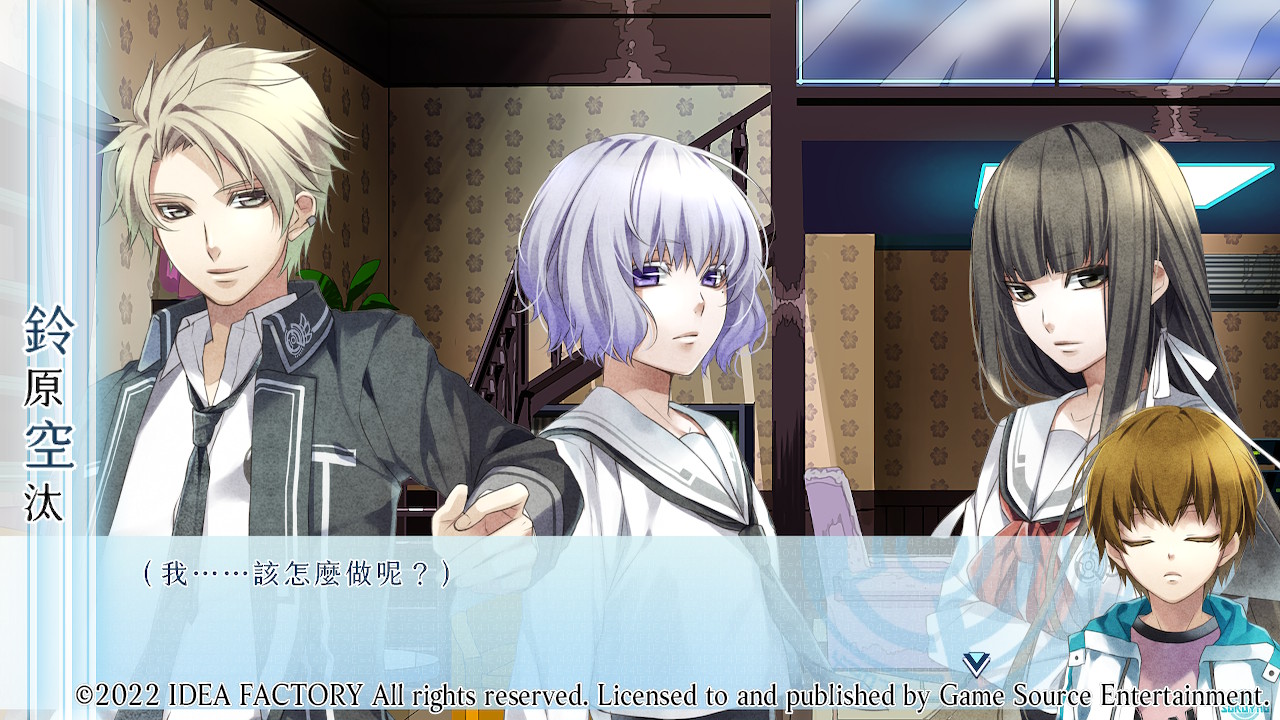 Choose a heroine, and the target of the raid will vary depending on the heroine you choose.

※If you did not select the option related to the heroine you want to choose in the options before entering the first chapter, you will be asked to return to this option to re-select.

※The two heroines who have not been selected will maintain the default names of the system.

※Only the “Koharu” route can be renamed in the middle of a chapter. You can use the perspective of each strategy character to watch the story when everyone first started living on the ship not long before entering this story. Each episode will unlock the story of one of the nine attackable characters. After browsing all the prelude stories, you will unlock the content of the three chapters “Concerto”, “Fugue” and “Fantasia”.

You can watch the story that happened after the “VAR COMMONS” chapter HAPPY END. You can choose the corresponding strategy character and enter the game from the prologue.

※The final chapter can only be unlocked after certain conditions are met in the Sun Wheel and Moon Shadow chapters. 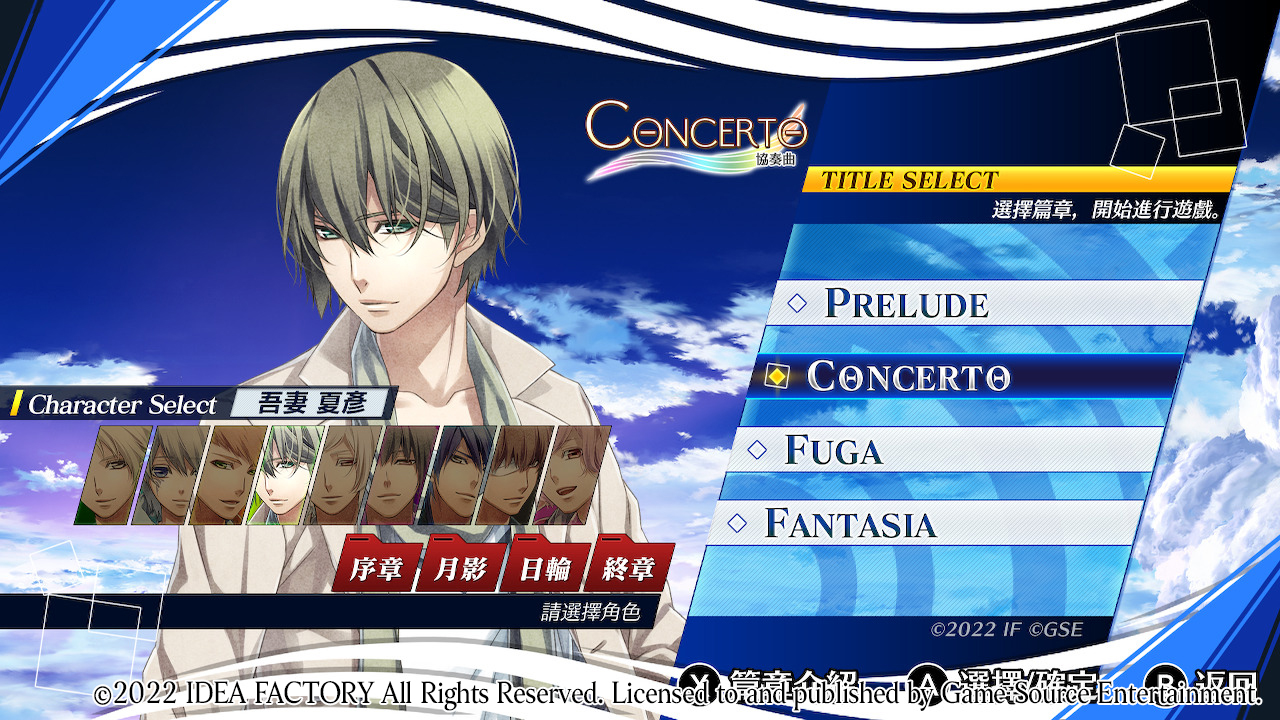 The storyline of “VAR COMMONS” will be reviewed from the perspective of the Raiders characters. You can see their inner thoughts and what they look like when the heroine is not there.

This chapter is a “what if” story where all the characters suddenly become smaller.

When selecting a dialogue record presented in plain text, a thumbnail of the relevant scene will be displayed in the upper left, which will make it easier to retrace the scene.

Save and read files use a common screen. The save location will display the chapter name, scene screen, and lines. The latest quick save file will be displayed at the bottom left of the screen, which can be read.

※During the game, you can also use shortcut keys to quickly save and load files. 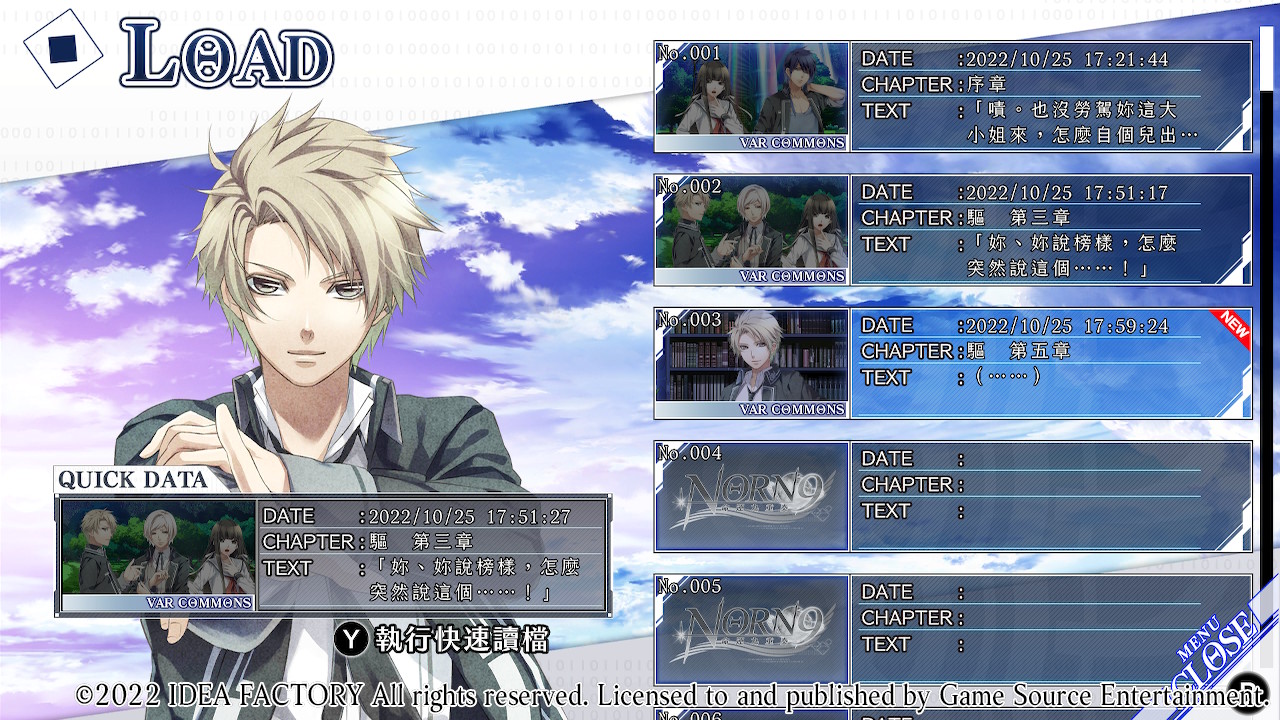 You can set whether the display speed of voice and text is synchronized.

The display position of the return key can be set. Since it can be operated by touch screen, the icon can be set at the bottom left or bottom right of the screen.

※It can also be set to make the back button “not displayed” on the screen.

When it is set to “ON”, when encountering options and switching chapters, it will automatically save quickly.

※There is only one storage location for quick save, so each save will automatically overwrite the previous record.

The handle will vibrate when the character uses the ability. It can be turned on or off according to preference. 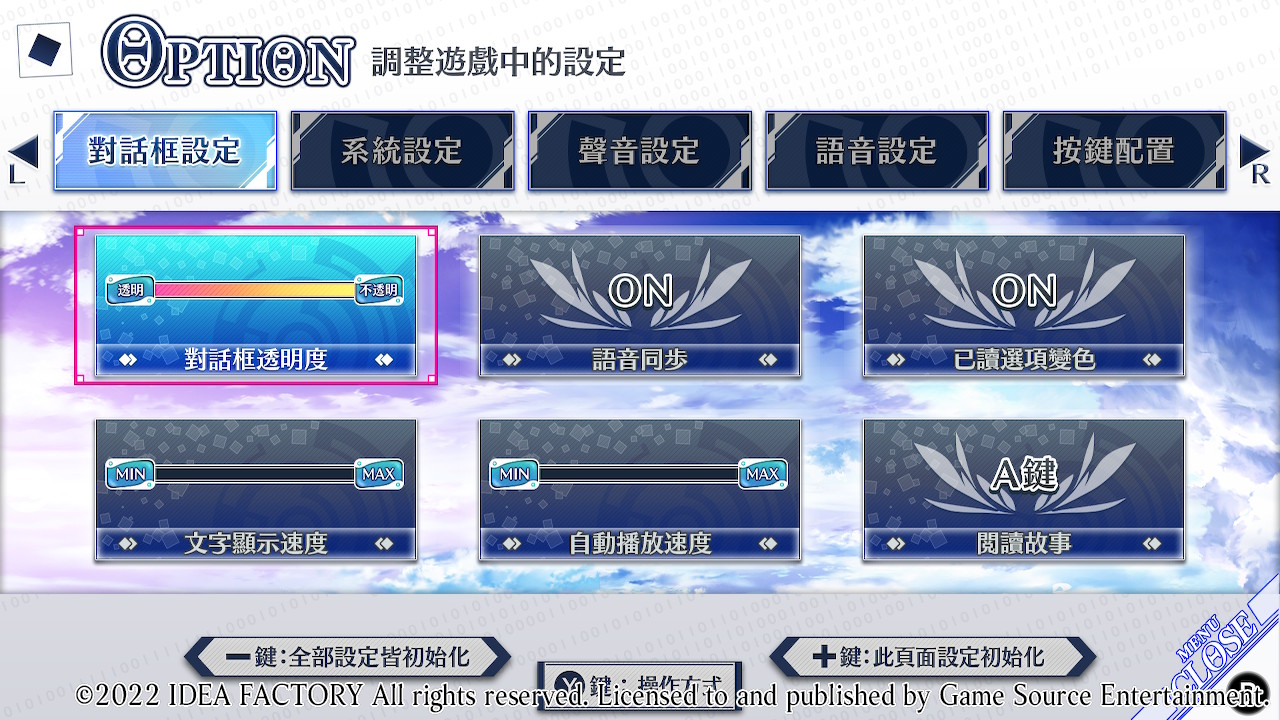 You can set touch shortcut keys on the top or bottom of the game screen.

Pictured from left to right are: 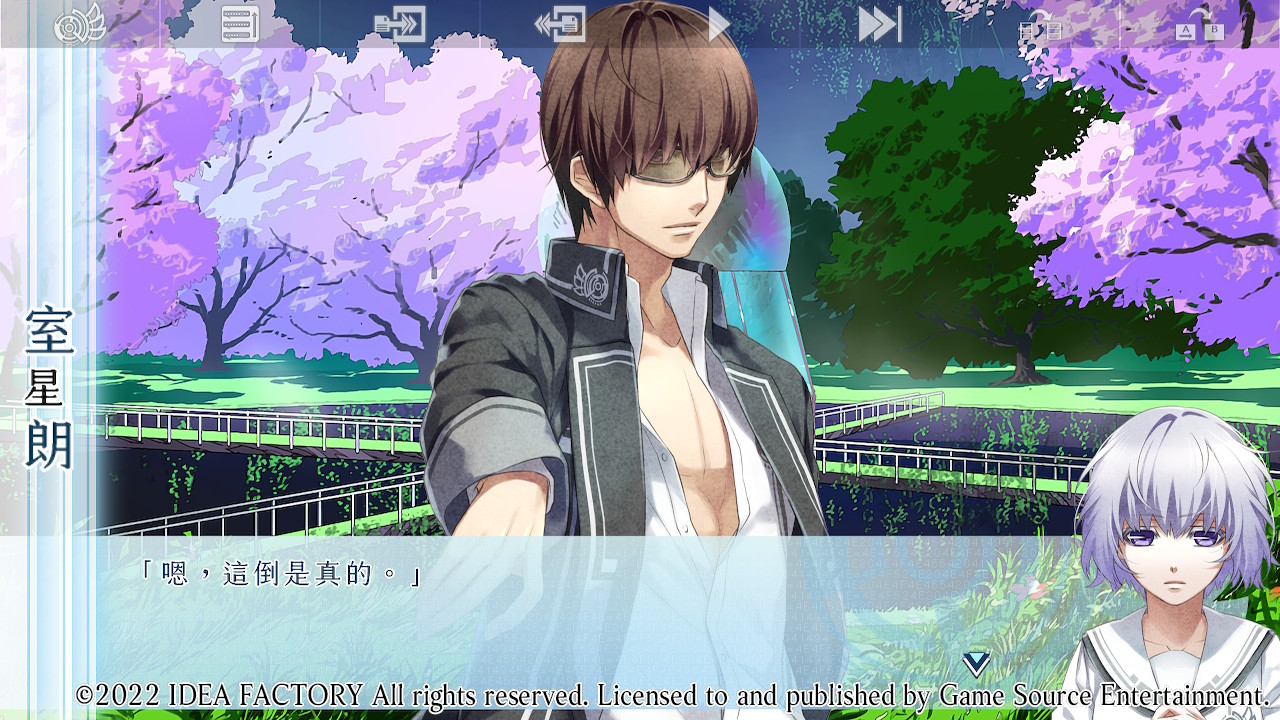 When the ZL key is pressed, various functions can be performed by pressing each key at the same time. 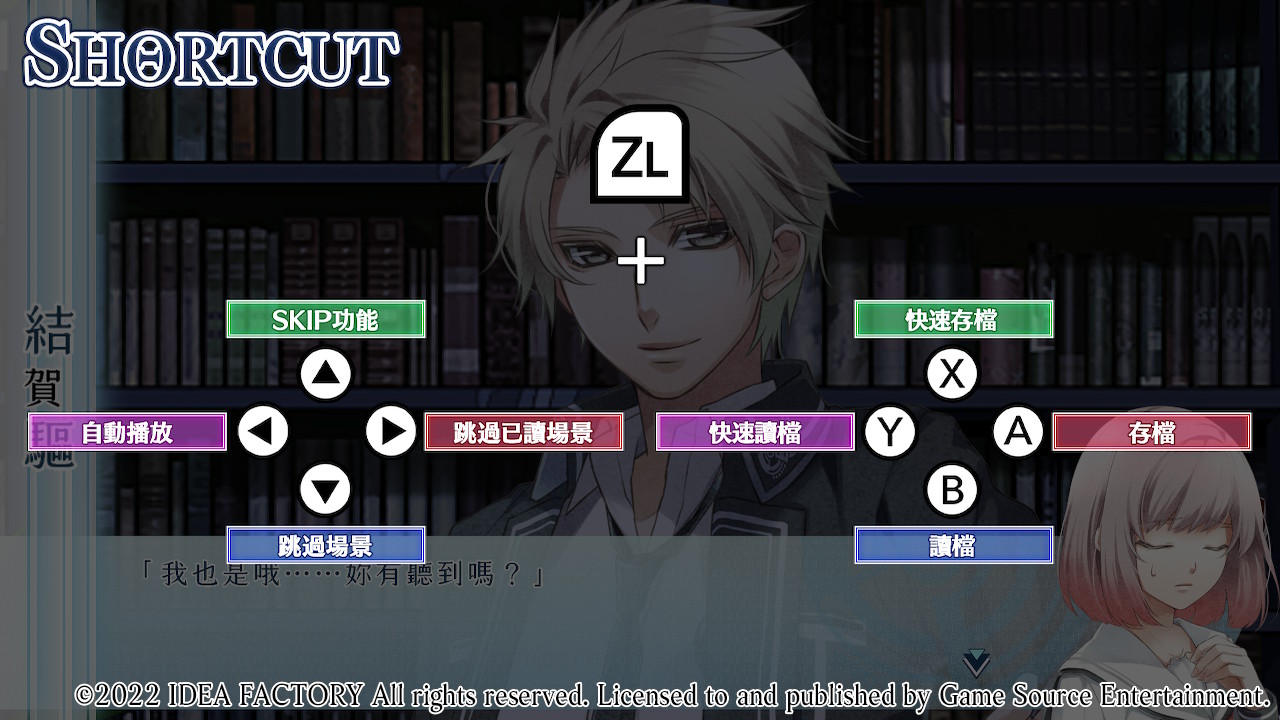 You can enjoy and experience the additional contents of the “VAR COMMONS” and “LAST ERA” chapters.

※All content will be unlocked one by one if specific conditions are met.

You can appreciate the CGs that appear in the game, and you can also review the collected CG scenes.

After the conditions are met, a special icon will appear on the thumbnail of the event CG. Click on a specific position of the event CG to play various voices.

Red: the voice of the heroine (each CG has three different voices)

Blue and Green: The voice of the raider character (each CG has three different voices) 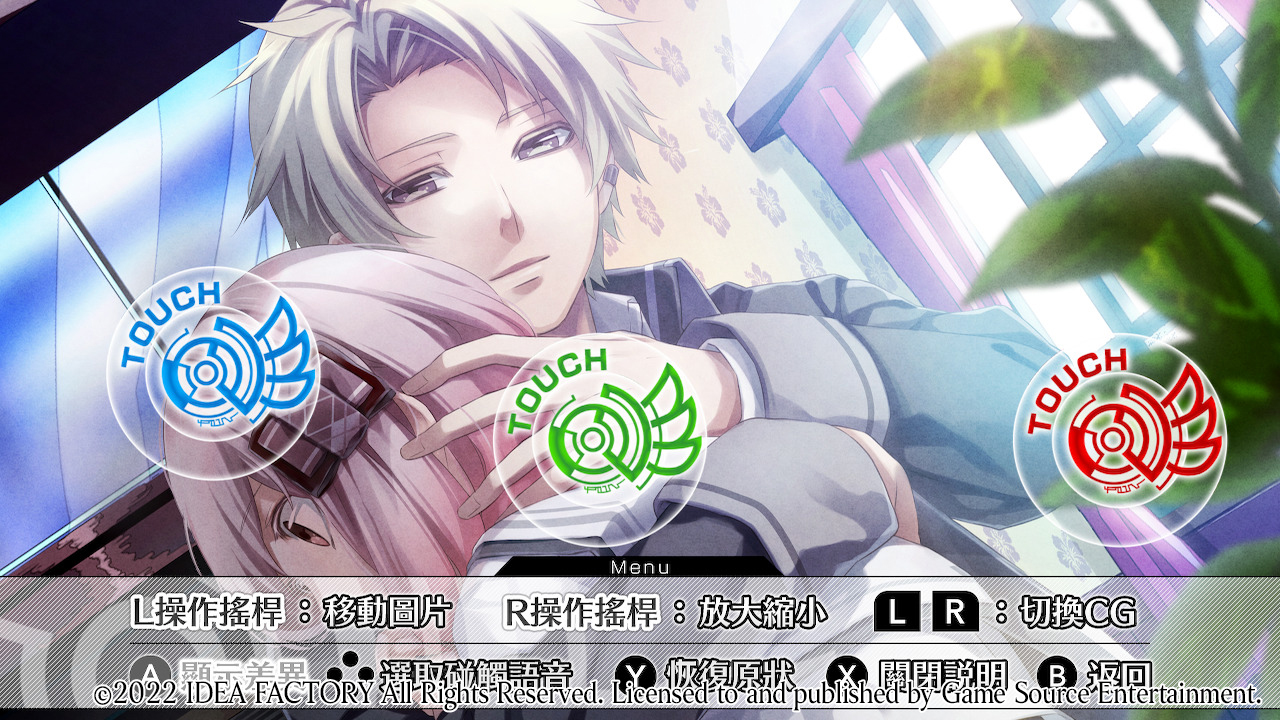 You can view videos you have watched in the game.

You can listen to the BGM in the game.

The BGM of each chapter must be exchanged and unlocked at “NORN9 STORE”.

Both chapters can be exchanged for the corresponding “SHORT STORY”, “Extra Illustration”, “Four-frame Comics” and “BGM”.

In “LAST ERA”, the content of “Bonus Voice” with Chinese subtitles has also been added.

VAR COMMONS (additional content only in the “VAR COMMONS” chapter)

When playing the game of “VAR COMMONS” chapter, you can get “keywords” and listen to their related voices. You can also listen to the collected voices in the way of free combination and continuous playback.

You can enjoy the Chick Channel content you have watched in the game. This is a mini-game where you can enjoy character interaction in a nostalgic game-style screen. Depending on the character you choose, the events that happen will be different. In this game, you can get “points” that can be used at “NORN9 STORE”.
※Depending on the events encountered in the game, the accumulated points may also be reduced.

LAST ERA (only the “LAST ERA” chapter has this additional content)

This is a mini-game where you can freely explore the Goddess of Fortune in a nostalgic game-style screen. Depending on the heroine being manipulated, the events that occur will be different. In this game, you can get “coupons” that can be used at “NORN9 STORE”.

Cash and the underground economy: Calabria and Campania black shirt