The “Little Football Team” of the new era of Zhongfu Huieryi staged a “Flying Sky” to return the children – Xinhua English.news.cn

“Double reduction”, can children justifiably watch anime? Is it possible to play games confidently? Parents worry, will eager children not be as active as they used to be? Will naughty students become more naughty? As a result, a football interest class became the focus, and hot topics such as home-school conflict, team spirit, and frustration education were presented one by one in the play. Today and tomorrow, the children’s drama “The Flying Sky” will be performed at the Malanhua Theater.

With football as the theme and campus life as the environment, “Free Sky” is committed to realizing empathy and resonance with parents and children, and inspiring children to establish a correct outlook on life and values. In the early stage of creation and collection, in order to dig deeper into the story behind the theme, the main creator of the crew invited Qian Hui, a senior coach and youth training director of the Putuo District Youth Football School, to walk into Children’s Art. Therefore, this afternoon, a special group of small audiences came to the Malanhua Theater. They were Coach Qian Hui and her small football team members. This is the communication between the “football players” in real life and the “football players” on the stage.

Once upon a time, the phrase “don’t let children lose at the starting line” has bound many parents. According to Du Cun, the screenwriter of the play, life is actually a marathon, and the starting line is almost negligible. More importantly, how to run on the way, how to pace, when to change speed, and how to sprint, is the winner of the game. Du Cun said: “Let children release their nature, let go of themselves, and extend the classroom to a wider world. This is the original intention of ‘double reduction’, giving children a better psychological construction space, and they will benefit endlessly after stepping into the society. ” 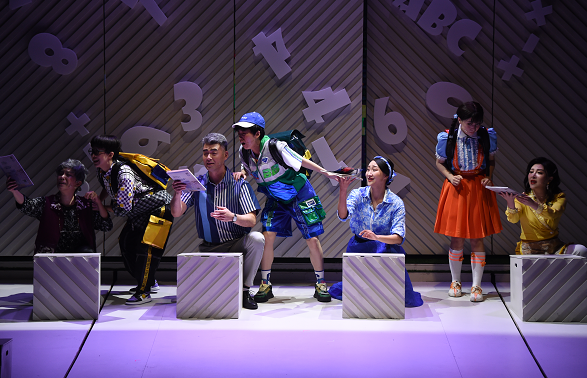 Ren Deyao, the old director of the theater, wrote a play called “Little Football Team” in the 1960s, and the story was about what happened to the children at that time. The play received rave reviews when it was performed in Beijing, and Premier Zhou Enlai also watched the performance and took a group photo with the cast and crew. Today, the theme of “small football team” is still used to write about today’s children today, and it is also the main creator’s tribute and inheritance to the old dean and the theater’s predecessor artists.

Director Xu Jun expressed the hope that through “The Flying Sky”, he will have empathy and resonance with more children and parents, and bring more beneficial thinking and inspiration to the growth of young people. The play will continue to perform at the Malanhua Theater on October 1 and 2. (Xinmin Evening News reporter Zhao Yue)

Pope speaks to young entrepreneurs: a new economy is needed, listening to the cry of the poor and the earth – Vatican News